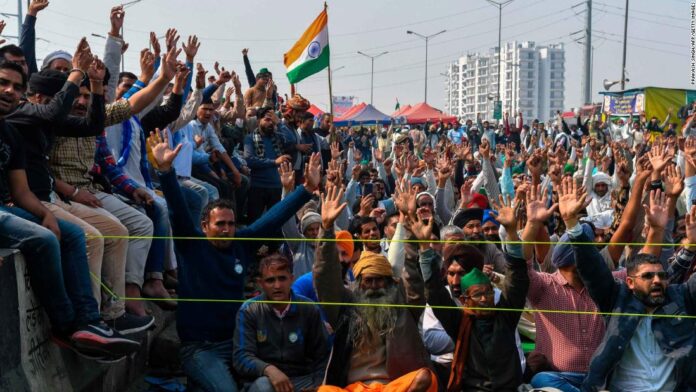 CNN’s Vedika Sud spent several hours at the Ghazipur camp on the Delhi-Uttar Pradesh border talking to farmers about their fears. She found a group of passionate people who are determined to stay for as long as it takes to have the laws repealed.

Go There asked Sud to answer some of your questions about their campaign.

It looks like the protesters aren’t wearing masks. How are these farmers handling the coronavirus situation?

Sud: I’m glad you asked. There’s little attempt at social distancing at the protest site, where organizers say around 10,000 farmers and their supporters are camped. They work closely in groups in community kitchens and at makeshift supply stores, and at night they sleep side-by-side in trucks and tents. We saw several protesters crammed onto tractors, singing and dancing as they drove through the camp. And, when leaders give their speeches, hundreds of onlookers sit cheek by jowl near the dais to listen to them. Surprisingly, we couldn’t spot a single person with a mask!

I asked many farmers about this and their answers were worrying and unscientific. Some said they hail from villages where there are no cases, and they see no reason to wear a mask. Others mocked us for even asking. Many have no fear of catching Covid-19, but one farmer told me he’d rather die from the virus than accept the new farming laws.

Why are farmers worried about the new laws?

Sud: Not all of the farmers I spoke to understand the reforms, and many of them fear change. For decades, they have worked and sold their produce following particular guidelines. This huge shift to entering into contracts with private companies and dealing with big corporations instead of middlemen can be intimidating.

The Indian government says the new laws will liberalize the agricultural market and reduce the exploitation of farmers. Their income could even double, the government says. However, farmers fear that opening the market to private companies could lead price falls and lower incomes.

Most of the farmers who are protesting are from India‘s northern states of Haryana and Punjab where they receive guaranteed prices, or a Minimum Support Price (MSP), for certain crops, allowing them to invest in the next crop cycle.

Farmers are worried the new laws will mean they’ll have to sell at prices below the MSP guarantee. Indian Prime Minister Narendra Modi insists the MSP will not be removed, and has accused the opposition of misleading farmers.

A large part of the problem is that the farmers don’t trust the government.

How will the protests and encampments help farmers achieve their demands?

Sud: Despite 11 rounds of talks between government and farmer union representatives, there has been no breakthrough.

Recently, the government offered to suspend the three agricultural reforms for 18 months, but the offer was rejected by farmers’ unions. They’ve given the government until October 2 to repeal the laws or face further action.

The protests have united farmers from northern India, and their numbers are growing. One farmer told me they were prepared to protest until the next general election in 2024, if they have to.

Not all farmers reside in North India, but it’s worth noting that agriculture is the primary source of livelihood for 58% of India’s 1.36 billion population. That means it’s a significant voting bloc.

Fatigue will set in at some point, and so will financial concerns as the crucial harvest season approaches.

So far, at least 147 farmers have died from suicide, accidents and exposure to cold weather, according to farmer unions and opposition leaders. Central and state authorities haven’t confirmed the death toll.

The farmers say they won’t let the loss of life be in vain.

But the government has made it clear it will not be repealing the laws.

How is the US impacted by this political issue?

Sud: The Biden administration is not directly impacted by the farmer protests. However, the US Embassy in New Delhi issued a statement after the Indian government temporarily cut internet access at the protest sites in January.

The connection was cut after violence broke out in Delhi between farmers and their supporters and police.

In its statement, the US Embassy said “the internet is fundamental to the freedom of expression and a hallmark of free speech.” It also urged the government and farmer unions to keep talking to resolve the issue.

In December, some US lawmakers wrote to then-Secretary of State Mike Pompeo in support of the protesters. The letter said the issue was of concern to many Indian Americans with links to Punjab and other Indian states.

Many Indian Americans from Punjab’s Sikh community who have settled in the US have families and friends in India who are either participating in the protest or are supporting it.

But the Indian government has made it abundantly clear that any international interference is unwelcome.

On February 3, India’s Minister for External Affairs issued a statement saying, “It is unfortunate to see vested interest groups trying to enforce their agenda on these protests, and derail them.”

“Some of these vested interest groups have also tried to mobilise international support against India.”

Texas Is Awash in Natural Gas. It Didn’t Help in the...