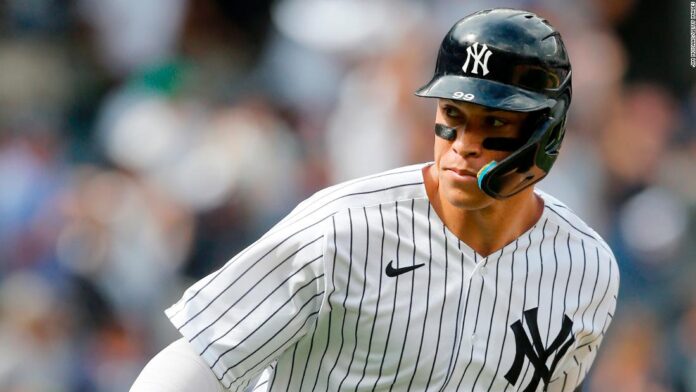 First, the 30-year-old superstar hit his 54th home run on the season during the New York Yankees’ 5-2 win over the Minnesota Twins at Yankee Stadium.

His 404-foot, two-run shot flew to the second deck of left field off Twins reliever Trevor Megill, breaking a 2-2 tie in the sixth inning.

In doing so, Judge continued his Most Valuable Player trajectory — vying with the Los Angeles Angels’ Shohei Ohtani — as well as equaling a team record.

He tied Alex Rodriguez’s record for the most home runs in a single season by a right-handed batter in Yankees history, which Rodriguez set in 2007.

Judge’s 54th home run is his eighth in his last 13 games and continues his potentially historic season.

With 27 games remaining, Judge is on pace to hit 65 home runs which would be the most in a season in Yankees history. The 61 hit by Roger Maris in 1961 is also the American League record.

If Judge is able to finish the season with 65 homers — which would require one every 2.5 games — it would be the fifth 65-plus home run season in MLB history.

The most ever in a single season was by Barry Bonds in 2001 when he finished with 73.

“Every single day, I show up to work ready to go and do whatever it takes to get our team a win,” Judge said after hitting his 54th home run. “If that’s me moving a guy over, driving a guy in, making a play on defense — that’s what I’m focused on.

“All the individual awards, accolades, stats you get throughout the year, it’s all based on how well you help the team out. So if I’m not out there helping the team every single day, the stats and all that stuff doesn’t show up.”

“Man, it just gets more and more amazing what he’s doing. I mean, it really does,” Boone said. “Doesn’t get pitched to much and [is] just ready when it is in there. It’s getting hard to put into words what he’s doing … Just a special season he’s in the midst of.”

The day didn’t end there for Judge though.

He was later pictured at Arthur Ashe Stadium to take in some late-night US Open action.

Judge watched as his US compatriot Danielle Collins lost to sixth seed Belarusian Aryna Sabalenka 6-3 3-6 2-6 in the fourth round.