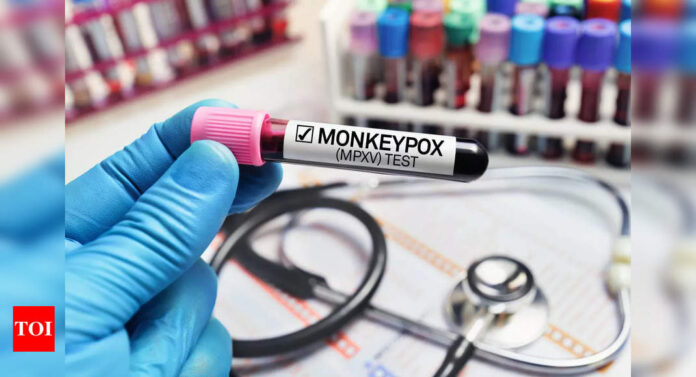 NEW DELHI: The city recorded its sixth case of monkeypox after an African woman tested positive for the virus on Friday. The 22-year-old woman was admitted to Lok Nayak Hospital on August 31.
Confirming this, Dr Suresh Kumar, the hospital’s medical director, said the patient’s sample had been sent to National Institute of Virology, Pune and she tested positive for the virus. The patient had arrived in India in January and was staying in Dwarka.
According to doctors, she visited the hospital as she was suffering from fever and sore throat for the last five days, and had vesicular rashes (small fluid-filled blisters) over genitalia, palms, trunk and face for the last three days, besides cervical lymph nodes.
Till now, six cases of monkeypox have been reported in Delhi and five successfully treated and discharged, said Dr Kumar, adding that three each were men and women. All were in the age group of 20-35 years. He added that of the six patients, five were from Africa and one hailed from West Delhi.
According to nodal officer Professor Vineet Relhan, two protocols are followed in monkeypox cases- either the patient is admitted for 21 days treatment or till the patient’s report for the virus comes negative.
All the cases had very mild symptoms and had good recovery, said Relhan, adding that the last patient was discharged on September 30.
He added, “West African clade was found among all the patients admitted to the hospital and it is less severe than the Central African lineage.”
“We usually provide symptomatic management for fever, itching, infection or pain,” said a treating doctor. Though some research recently revealed that monkeypox infection developed acute myocarditis (inflammation of the heart muscle) approximately one week following the onset of the virus’s symptoms, no such case has been reported here, the doctor added.
National Centre for Disease Control director Dr Sujeet Singh told TOI that there is no spread of the monkeypox virus. India has so far recorded 11 cases of monkeypox infection, including five in Kerala, one of whom succumbed to the infection. “Contacts of these patients have tested negative and so far, 285 people have been tested for the virus,” he said.
According to the World Health Organisation, monkeypox is a viral zoonotic infection, which means it can spread from animals to humans. It can also spread from humans to other humans and from the environment to humans.