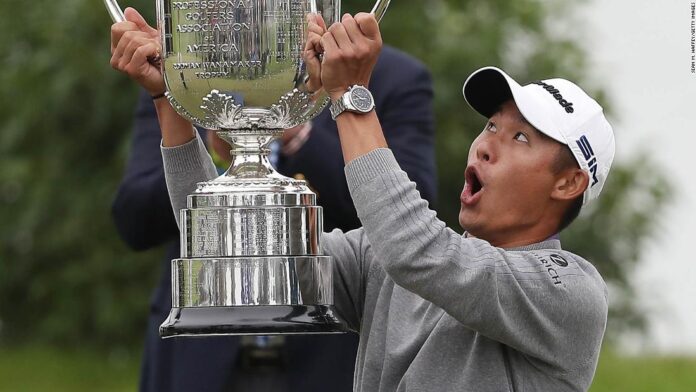 A little over a year later, in August 2020, he was golf’s fifth highest-ranked player.
His shock victory that month at the PGA Championship at TPC Harding Park in San Francisco — finishing two shots ahead of Dustin Johnson and Paul Casey in only his second major outing — catapulted him to the top of the game and into mainstream recognition.

Morikawa, who admits the victory at the PGA was “very life-changing,” is adamant the fame that has come with it won’t “change who I am.”

“A lot of opportunities are given to you, a lot more sponsorships, people being aware of who you are,” he told CNN’s Living Golf’s Shane O’Donoghue.

“I feel like I’m still the same 23-year-old kid that you guys call me. I’ve got a smile on my face, and I love food, and I hope that’s me for the rest of my life.”

While many players might have been sated by that victory, that is not the case for Morikawa.

“It didn’t feel like I checked that box off of winning a major championship and I’m satisfied with the rest of my career. It just made me want more,” he said.

“Now, whether I’m at a major championship or a regular event, European Tour event, whatever it might be, I want that winning feeling because when you win, it’s just a feeling that you can’t describe, especially in golf, with us really losing more than we win.”

Having initially broken onto the scene in the US with victories on the PGA Tour, Morikawa is now looking to take his game around the globe.

“If you look at the history of golf, there’s a lot of global players and those are the ones that are well-known,” he explained.

“It speaks a lot to their personalities as a person, but it also speaks a lot about their games. They’re able to adjust. That’s all about golf, adjusting to what we’re given ahead of us.”

On the European Tour, Morikawa finished fifth in the 2020 Race to Dubai and will be traveling back to the emirate this month as one of the headliners for the OMEGA Dubai Desert Classic, which is set to start on January 28.

Taking to the course alongside 2017 winner Sergio Garcia and European Ryder Cup heroes Tommy Fleetwood, Justin Rose and Tyrrell Hatton, the Californian’s skills will be put to the test at the Emirates Golf Club.

“My entire life, it’s always been about consistency. I’ve said that since day one, I believed in myself that I could do it, but I’ve only tested myself out really in the US on the PGA Tour,” he said.

“And what better way to come out here on the European Tour, the Race to Dubai, and really make a statement for myself to show that my game travels. At the end of my career, I want to look back and be able to say that it does.”