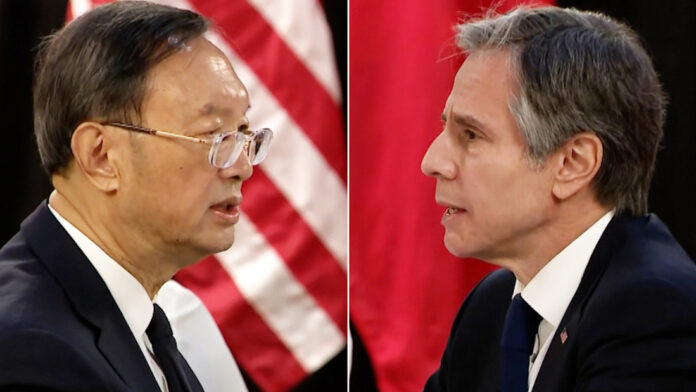 When it was first revealed that top officials from the United States and China would be meeting in Alaska this week, there was a degree of optimism this could mark the start of a new relationship between the two countries, after an almost complete breakdown during the final year of President Donald Trump‘s term.

Even Cui may have been surprised at just what an acrimonious start those talks got off to, however. After US Secretary of State Antony Blinken read prepared remarks for journalists invited to watch the opening of the meeting, in which he promised to bring up “deep concerns” the Biden administration had with some Chinese actions, Beijing’s top diplomat, Yang Jiechi, immediately pushed back.

Yang warned the US to stop meddling in China’s “internal affairs” and said it should “stop advancing its own democracy in the rest of the world,” adding that many Americans “actually have little confidence in the democracy of the United States.”

His remarks went far beyond the two minutes US officials said they had agreed upon before the talks, and Blinken insisted on issuing a rebuttal while the media was still present, with the Chinese then accusing him of being “condescending,” as their US counterparts complained of “grandstanding.”

In a write-up of the exchange, published hours after it took place, Chinese state broadcaster CCTV said it was the US side that was “seriously exceeding the time limit” in their opening remarks and “provoking dispute” by launching “unreasonable attacks” on China’s domestic and foreign policies.

Exchanges behind closed-doors appear to have been more congenial, however. A senior White House official told reporters after the first session finished that talks were “substantive, serious, and direct.”

“We used the session, just as we had planned, to outline our interests and priorities, and we heard the same from our Chinese counterparts,” they said, before the second set of talks began.

That meeting is expected to stretch into the late Alaskan evening, with the final set of talks due to begin Friday morning local time.

Since before Biden was elected last year, Beijing has made clear that while it desires a reset of relations with Washington, it wants one on its own terms.

While China’s global reputation was damaged by the coronavirus pandemic, the country has emerged largely unscathed economically, and politically the Communist Party is even more secure than ever, as demonstrated by renewed crackdowns in Xinjiang and Hong Kong.
Since 2010, China has been calling for a “new model of major-power relations,” a framework for a more balanced relationship that has been largely rejected by Washington. But Biden is perhaps the first US President to be facing a China which sees itself as on a level playing field with the US, and is not content to play the role of junior partner.
In an editorial earlier this month, the state-run China Daily said “hopes were high that (the Biden administration) would work with China to get bilateral relations onto a more positive track.”
While Beijing has made it clear it prefers a stable relationship, the aggressive moves by the Trump administration also demonstrated China can weather a lot of what the US has to throw at it, be it trade tariffs, sanctions, or diplomatic pressure.
After Biden claimed to have had a “robust” call with Xi last month, Chinese state media framed the discussion very differently, with Xi appearing to dismiss Washington’s concerns about Xinjiang, Hong Kong and Taiwan, saying “the US side should respect China’s core interests and act prudently.”

Beijing may have been hoping for a relationship more like that it enjoyed during Biden’s last stint in government, under President Barack Obama, whose rhetoric about being tough with China and a supposed “pivot to Asia” did not have much effect on the two countries’ economic ties, nor according to critics, do much to restrain Chinese territorial ambitions.

Blinken, for his part, has made it clear that this is not on the cards. He has called the US-China relationship “the biggest geopolitical test of the 21st century,” and ahead of the Alaska meeting this week, rallied Washington’s allies in the region against Beijing.

One extra wrinkle in the talks comes with the trial of two Canadians held in China on espionage charges. Michael Spavor and Michael Kovrig were detained in 2018 after the US sought the extradition from Canada of Huawei executive Meng Wanzhou.

Spavor’s trial began on Friday in Dandong, China, as officials were meeting in Alaska. Previously both Blinken and Biden have urged Beijing to release the two men, whose detention Ottawa and Washington regard as arbitrary and political, and doing so — potentially after a face-saving conviction and sentence of time-served — could be an easy sign of good will from Beijing.

According to Chinese state media and Canadian officials at the scene, Spavor’s trial wrapped up in a matter of hours. A statement on the website of Liaoning Dandong Intermediate People’s Court said that a verdict would be announced “at a later date in accordance with the law.” Kovrig’s trial is expected to begin Monday.

Such good will could be in short supply however, depending on how high hopes were from Beijing going into the Alaska summit.

For its part, Washington made clear this week it was not prepared to compromise. Speaking in Tokyo, Blinken promised the US “will push back if necessary when China uses coercion or aggression to get its way.”

His Japanese counterpart, Toshimitsu Motegi, said the “free and open international order is greatly challenged by attempts to change the status quo by force and progress of authoritarian system,” and added Tokyo and Washington agreed on the need to hold Beijing to account.

A similar message was delivered in Seoul days later, where South Korean President Moon Jae-in said his country and the US would “continue to act together on shared challenges.”

While Trump enjoyed outwardly positive relationships with both Moon and former Japanese Prime Minister Shinzo Abe, his policies toward US allies in the region were often unpredictable, veering between ramping up cooperation on some fronts, while threatening to force both Japan and South Korea to pay for US troop bases in the respective countries, or slapping them with trade tariffs.

In his speech this week, Moon appeared to criticize Trump when he welcomed the “return of diplomacy and alliance” with the US.

Such stronger ties could be of concern to Beijing, whose aggressive moves along its maritime and land borders have rattled many neighbors. India, in particular, long a neutral party in the US-China relationship, has moved much closer to Washington amid border clashes with Chinese forces in the Himalayas.

This month, Biden met virtually with the leaders of Japan, India and Australia, a grouping known informally as “the Quad,” and the four later issued a joint statement saying they were “committed to a free, open, secure and prosperous Indo-Pacific region,” seen as a message to Beijing.
While not a formal military alliance like NATO, the Quad, or Quadrilateral Security Dialogue, is seen by some as a potential counterweight to growing Chinese influence and alleged aggression in the Asia-Pacific region, and there have been suggestions South Korea could join, further strengthening the alliance.

The collation has been denounced by Beijing as an anti-China bloc, but it is one that — if translated into a more cohesive alliance — could have a real effect in influencing Chinese policy.

And with the talks in Alaska appearing unlikely to result in closer ties between Washington and Beijing, China’s leaders could be feeling apprehensive for what that could result in.