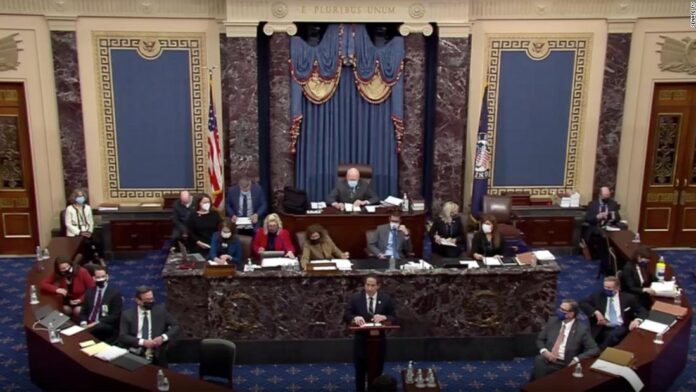 House Democrats forced Trump‘s second impeachment, presenting a compelling case that he incited an attack on the Capitol, and driving a wedge between Republicans willing to look the other way versus those abhorred by Trump‘s behavior.

On Saturday morning, after CNN’s Jamie Gangel reported shocking new details about Trump‘s behavior on January 6, Democrats found themselves on the cusp of demanding true accountability. They were joined by five Republicans in an effort to call witnesses — especially Rep. Jaime Herrera Beutler, the Washington Republican who has been instrumental in calling out the Trump defense team’s counterfactual claim that Trump opposed the rioters rather than cheering them.

Finding enough Republicans to convict Trump was still going to be a high bar and the Democrats would have had to offer Republicans a chance to call their own witness. But rather than push ahead and exploit the opening, Democrats decided to enter a written statement from Herrera Beutler into the record, allowing the impeachment trial to proceed toward Trump’s expected acquittal.

Having the trial over will help Biden get down to business. But it will leave Americans who hoped Trump could be blocked from future political office wondering what might have been if Democrats had been a little more ruthless in their protection of the Constitution.

The GOP is still Trump’s party

Trump once quipped that he could shoot someone on Fifth Avenue and not lose any voters. (His lawyers subsequently pushed a claim in court that, as president, Trump couldn’t be charged for doing that, either.) It turns out that he could also dispatch a riotous mob up Pennsylvania Avenue to attack the US Capitol — with his own vice president inside — and most Republican senators would stick by him.

Seven Republican senators voted that Trump was guilty of incitement, but most Republicans argued that the trial itself was unconstitutional because Trump was no longer president, saying that fact trumped any evidence presented during the trial.

In moments of frustration with the GOP, Trump has mused about starting his own political party, but it doesn’t seem he needs to. When his lawyers manufactured an alternate reality in which he was calling for peace as rioters sacked the Capitol, the Republicans who were among those targeted by the mob grasped at the lifeline. That they could watch video of Mike Pence’s evacuation and Utah Sen. Mitt Romney’s near-miss with rioters alongside Trump’s words leading up to the riot and then vote to acquit him is just the latest evidence that Trump’s sway over the party is far from diminished.

Twitterless Trump is a much quieter force

A pianist who can’t play, a soprano who can’t sing and Trump without Twitter share silence. He hasn’t been heard from directly since retreating to a sort of self-imposed post-election exile at his private Mar-a-Lago club in Florida.

So one of the jarring elements of the trial was hearing his voice again in hours of video played by House impeachment managers to make their case. Trump may still have Republican lawmakers in check, but it’s much harder for the public to know, on a moment-by-moment basis, what he’s thinking.

That’s an interesting prospect for American politics going forward. The marching orders during an impeachment trial are easy. Acquit! But Trump must have been frustrated, fuming privately and dying to get his thoughts out in the open during this trial. We’re left to wonder what they were — or wait to read it in the papers or here on cnn.com — rather than seeing them pop up on our phones every few moments.

Republican women are profiles in courage

Profiles in courage — with a nod to the book then-Sen. John F. Kennedy wrote about former Senate colleagues — here means willing to stand up to the party and buck convention. Politicians are most interesting when they’re standing up for something that’s hard to stand up for.

It should not go unnoticed that among the key Republicans who stood up to Trump were several key women. Wyoming Rep. Liz Cheney saw her status as the No. 3 Republican in the House threatened when she voted to impeach Trump. Herrera Beutler, who also voted to impeach, put out a statement rejecting his lawyers’ defense as completely incorrect.

Among the seven Republican senators who voted to convict were moderate Sens. Susan Collins of Maine and Lisa Murkowski of Alaska.

Mitch McConnell is not a profile in courage

Compare Cheney’s actions and statements to those of Senate Minority Leader Mitch McConnell. It was made clear to reporters in January that McConnell thought this impeachment trial should go forward. He spoke out against the Trump-inspired insurrection on the Senate floor. But when it came to saying the proceedings against a former president were constitutional, McConnell voted no. When it came time to punish the former president who unleashed an attack on the institution McConnell loves, he told colleagues he would vote to acquit.

After voting to acquit, he offered a stunning rebuke of Trump’s behavior during a speech on the Senate floor, dismissing Trump’s conspiracy theories and blaming Trump for the riot. But he argued it was inappropriate to vote for impeachment because Trump was no longer in office, essentially trying to have it both ways on a technicality.

This is not the end of the story

Trump’s acquittal won’t be the end of accountability for the riot his words helped cause or his attempts to overturn the election. There are hundreds of cases pending for rioters, and their cases have begun to weave his words into arguments.

Take the case of Jessica Watkins, the Oath Keeper who federal prosecutors said in court documents this week waited for Trump’s command before marching on the Capitol.

Prosecutors in Georgia have opened a criminal investigation into Trump’s effort to influence election results.

None of those cases, even if they lead to convictions, could bar Trump from future office like impeachment. But they are sure to keep the riot in the public eye.

This story has been updated.