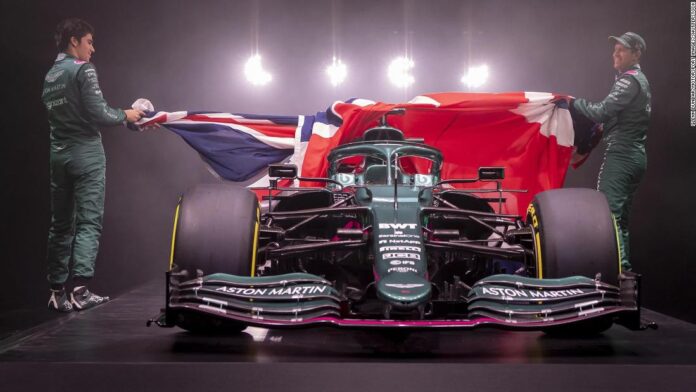 Included in all the pomp and pageantry were goodwill messages from NFL superstar Tom Brady and Daniel Craig, who can often be seen cruising around in Aston Martin’s in his role as James Bond.
One man who might’ve never had the opportunity to be a part of the landmark moment is new team driver Sebastian Vettel, who admitted he considered walking away from the sport last year.
“There was a point last year where I was definitely thinking about it,” he said, speaking to CNN Sport’s Amanda Davies. “So if you’re thinking about it, then I guess there’s a chance that you’re not on the grid. But here I am.”

Four-time F1 world champion Vettel has teamed up with Aston Martin, as the British car maker returns to the racetrack for the first time since 1960.

“It’s definitely exciting to be in a different color and a different environment and get to drive a different car,” he said. “That is still outstanding.”

As the new car was wheeled into the unveiling ceremony this week, Aston Martin also rolled out the big names to celebrate the announcement.

Craig, the actor who plays the Aston Martin driving spy with a license to kill, James Bond, congratulated the brand, emphasizing how thrilled he is to see them back on the track in their “iconic Aston Martin racing green.”

No need to prove anything

Following six years at Ferrari without adding to his five F1 championship wins, Vettel is “fired up” and “keen to overdeliver” but says he doesn’t need to prove anything to anyone other than himself.

“To me, yes, I always have [to deliver] every time I step in the car,” the 33-year-old said. “But I don’t feel I need to prove anything for other people.

“That’s never really kicked my motivation, it’s only about myself.”

In his final year with the famous Italian racing team, Vettel struggled for speed in a below-par car, finishing on the podium just once all season, eventually finishing 13th in the world championship standings.

After a difficult year around the world, and an upended schedule for sports stars, Vettel is looking to the potential of racing with a new team, before hopefully a return of spectators.

“It was a tough season for many reasons,” he said. “So, yeah, I’m looking forward to getting together with the team, getting on the track, and proving to ourselves what we think we are capable of.

“Hopefully in the not too distant future, we will be able to have fans back at the track and put on a good show.”