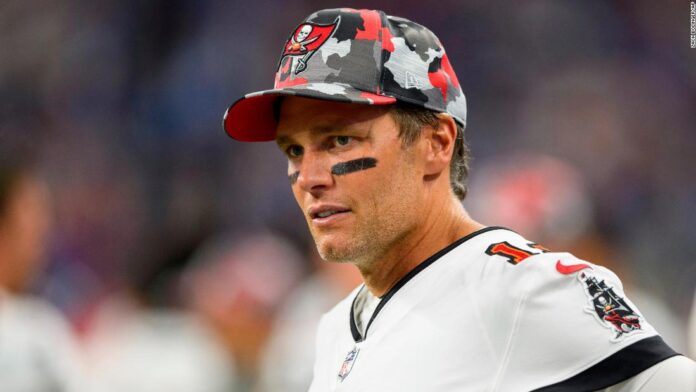 Brady, now 45 years old, has had a tumultuous offseason, retiring in February only to later reverse that decision. In the midst of August’s training camp, Brady took an 11-day leave of absence to “deal with personal things,” according to his head coach Todd Bowles.

And he begins to prepare to cope with the grind of another grueling NFL season, Brady explained how his life is evolving as he ages.

“As you get older, life changes quite a bit,” the Tampa Bay Buccaneers quarterback said on his ‘Let’s Go’ podcast on Monday. “There’s different responsibilities that take form in your life. There’s different perspectives you gain.

“When I was 25, all I did was think about football. That was my life. It was eat, sleep, drink football. It was my profession. It was my career. Over time, other priorities develop because you change and evolve through life and you grow in different ways. You take on these different responsibilities of family and commitments so forth and you commit time and energy to those things.”

Brady described the “big camera” which he felt focused on him at all times, inspecting his football life as well as his personal life and the scrutiny that came with it.

“You can’t stop your life even though sports is happening. Even though I’m playing in my 23rd year, I have a freshman in high school that’s playing football, too,” he said. “I have a 12-year-old that is going through his life.

“I have a 9-year-old that is going through her life. And I have parents, and I have a lot of things that are really important, off-field pursuits and goals that you’re trying to maximize as well. Once football season comes, I really lock in on what I need to do and how I need to focus and the kind of commitment I need to make for the organization, so we can maximize out potential as a team.”

The seven-time Super Bowl winner was philosophical about how he handles the pressure that comes with being the NFL’s biggest star and his changing life.

Following his lone preseason game on August 27, Brady told reporters “there’s a lot of s**t going on” when asked about his 11-day absence from training camp.

And despite others suggesting Brady had lost the passion for playing, he was unequivocal in his dedication to performing on the field.

“I just felt like I had a little left and I want to give it a shot and I owed it to my teammates and our great coaches and our whole organization,” he said. “We’ve built something pretty special here in Tampa over the last few years.

“And we were pretty close last year, at the end of last year, we lost to the Super Bowl champs, they made a few more plays than we did in that game. The competitive fire still burns and I want to get out there and have a great season for everybody because there’s a lot of people that have supported me along the way and I’ve always felt like I played for the name on the back of my jersey and I played for the name on the front of my jersey which is the Bucs and my family.

“I think football has taught me a lot of amazing lessons over the years, it’s brought me incredible relationships, I’ve had some of the best memories of my life on the field and I have a feeling this year it will be the same.”