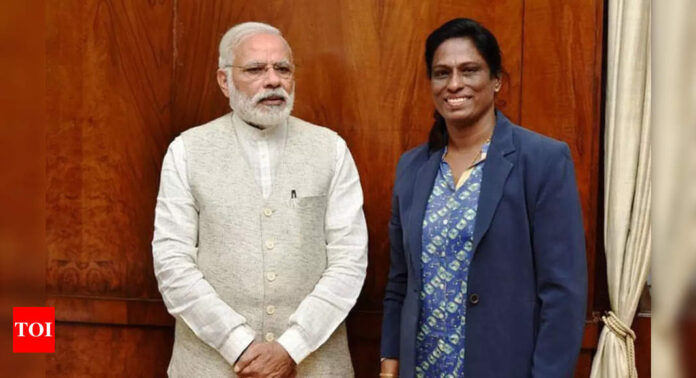 NEW DELHI: Celebrated athlete P T Usha and iconic composer Ilaiyaraaja are among four people to be nominated to Rajya Sabha on Wednesday. Philanthropist Veerendra Heggade and screenwriter-director V Vijayendra Prasad were also nominated to the Upper House of the Parliament.
Prime Minister Narendra Modi took to Twitter to congratulate them.
“The remarkable PT Usha Ji is an inspiration for every Indian,” PM said in a tweet. “Her accomplishments in sports are widely known but equally commendable is her work to mentor budding athletes over the last several years. Congratulations to her on being nominated to the Rajya Sabha,” PM added.

The creative genius of @ilaiyaraaja Ji has enthralled people across generations. His works beautifully reflect many… https://t.co/B0m2UUaZMC

“Shri V. Vijayendra Prasad Garu is associated with the creative world for decades. His works showcase India’s glorious culture and have made a mark globally. Congratulations to him for being nominated to the Rajya Sabha,” PM also said.
PM Modi also lauded Philanthropist Heggade saying that is at the forefront of outstanding community service. “I have had the opportunity to pray at the Dharmasthala Temple and also witness the great work he is doing in health, education and culture. He will certainly enrich Parliamentary proceedings.”
The Rajya Sabha has 245 seats. Of these, 233 members are elected and 12 members are appointed by the President of India. As per the constitutional limit, the strength of the House cannot exceed 250.
The President chooses and appoints the twelve nominees for the Rajya Sabha. They might be people who have significantly contributed to the fields of social science, literature, art, or social work. The Vice President of India serves as the ex-officio Chairman of the Rajya Sabha and is in charge of it.
The Rajya Sabha had vacancies in the nominated category. Out of the 12, five have been already nominated. This includes the names of former CJI Ranjan Gogoi, noted lawyer Mahesh Jethmalani, classical dancer Dr Sonal Mansingh, BJP leader Ram Shakal, Rashtriya Swayam Sewak Sangh (RSS) ideologue and Delhi University professor Rakesh Sinha.