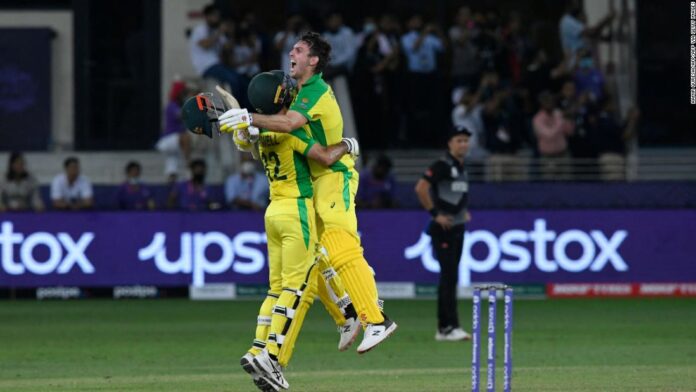 In what was an Oceanic clash, Australia looked to be cruising to the 173 target set by New Zealand — a score bolstered by a blistering 85 by captain Kane Williamson — with David Warner and Mitchell Marsh looking comfortable at the crease.

However, a wicket to Warner gave New Zealand some renewed hope, but the bludgeoning power of Marsh helped propel Australia to its target.

With New Zealand looking rattled and some excellent batting on display, Australia was able to comfortably claim its first title in cricket’s short format.

After sprinting onto the field to celebrate with Glenn Maxwell, Marsh and the rest of his teammates, Australia all-rounder Marcus Stoinis praised the team’s mentality and spirit for getting them over the line.

“The key is this group of boys, we actually love each other,” he said. “It is beautiful, I can’t wait to keep playing with this team. I’m so proud of them.

“You won’t find bigger supporters of Mitch Marsh than right here, apart from his family. We are so proud of him!”

Having won the toss and choosing to bowl, from the start of the final, it seemed like the smart decision from Australia captain Aaron Finch.

Through a combination of good bowling and a tough pitch, New Zealand was restricted for runs, also losing the wicket of opening batsmen Daryl Mitchell for just 11.

The turning point for New Zealand came when captain Williamson bwas dropped by fast bowler Josh Hazlewood on the boundary.

At that point, he had scored 21 runs off 21 balls. After that, he exploded, reaching a 32-ball 50 and also hitting Mitchell Starc for 22 runs off a single over.

However, in what proved to be a big over for Australia, Hazlewood claimed the wickets of Glenn Phillips and Williamson — after a remarkable innings of 85 runs off of 48 balls.

In the final few overs, Jimmy Neesham and Tim Seifert were able to guide New Zealand to a respectable 172 after their 20 overs, meaning Australia needed 173 to win its first T20 World Cup.

In response, Australia had a nervy opening over, with Finch — who got out on the first ball in the semifinal — surviving an early leg-before-wicket appeal in the first over.

But he didn’t survive much longer, with Trent Boult grabbing the wicket, his short ball being caught by Mitchell in the deep.

Through a partnership between Warner and Marsh, Australia was able to rebuild, reaching 82-1 at the halfway stage, needing 91 to win.

Warner reached an emphatic 51 off of just 34 balls with an emphatic six as Australia continued its progress to victory.

With the result slipping away from them, Boult returned to the bowling attack and claimed the wicket of Warner to give the Black Caps a glimmer of hope.

In the next over though, Marsh reached his own half century with his own big six, hitting the mark after 31 balls.

And with Maxwell — and also some wasteful New Zealand bowling — Australia eased to the target to claim the momentous victory, with Marsh top scoring for them on 77 not out.

Although New Zealand’s wait for a T20 World Cup title goes on, it is an iconic win for Australia who has had success in other formats of cricket, but claims the elusive title in the T20 edition.

A key cog in Australia’s success was leg-spinner Adam Zampa, who was the team’s leading wicket-taker in the tournament.

After the final, in which he finished with 26 runs conceded off his four overs with a wicket, he said the conditions of the UAE was something he tried to maximize.

Visit CNN.com/sport for more news, features, and videos
“I just tried to use my strengths to the best of my ability. I knew the wickets were going to be low and I bowled at good times,” Zampa said.

“We won the toss and bowled first, so it was probably a little bit drier when I was bowling and I tried to get wickets when we needed them.

“We’ve been in bubbles for almost two years now and that takes a toll on everyone, but you wouldn’t know it with our guys.”