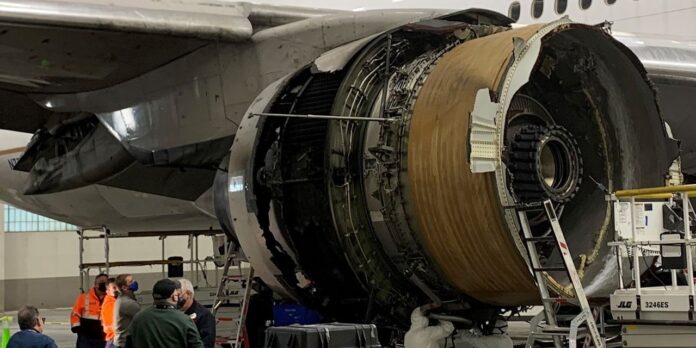 The midair breakdown of a jet engine that spewed a trail of metal over a Colorado town is putting regulatory focus on the design and strength of engine coverings.

Four minutes into the Honolulu-bound United Airlines flight from Denver on Saturday, pilots and passengers heard a loud bang, and the plane’s right engine began vibrating, according to the National Transportation Safety Board’s preliminary analysis of the cockpit’s voice recorder. Within 20 minutes, the plane had landed on the runway back at Denver International Airport, with no injuries to anyone on the ground or aboard the plane.

However, large pieces of debris plunged from the sky, landing in yards and a soccer field. Photos and videos taken by passengers show the airplane’s right engine, stripped of its front coverings, oscillating and in flames.

Investigators have homed in on a fan blade that had weakened over time and broke off at its base. That fast-spinning blade remnant appears to have sheared a second blade roughly in half. But investigators are still trying to understand why the engine’s front external cover, known as the cowling, was then ripped away, according to NTSB Chairman

Something similar happened in a handful of other engine failures caused by broken fan blades in recent years.

“Certainly, we don’t expect the cowling to separate like that,” Mr. Sumwalt said this week, during a briefing with reporters. He added that the safety board’s investigators would examine the engine’s maintenance and inspection records.

Such damage to external engine sections isn’t supposed to happen under current manufacturing and inspection systems, which have ushered in an era of record airline safety in the U.S. and globally. The incident raises concerns about whether engine coverings are too vulnerable to damage from engine components flying forward at great speed, in addition to questions about why the fan blades broke, some safety experts said.

a former U.S. aviation accident investigator, said investigators and regulators will need to think about the integrity of the structures that house aircraft engines and how they are designed and certified. If one were to fail, that can pose a danger to the rest of the aircraft. “They’re going to have to re-examine that,” he said.

Concerns about engine coverings also came to the fore after a Southwest Airlines flight in April, 2018, when remnants of engine blades broke off and battered front engine coverings. When airflow and severe vibration then broke up the damaged cover, fragments were hurled into the wings and body of the

737. One piece blasted out a cabin window, partially sucking out a passenger, who died.

In responses last year to recommendations the NTSB made after the Southwest incident, FAA Administrator

said the agency was working with Boeing Co. on a design change for the type of engine involved in the incident, and was reviewing design and certification standards for engine casings to determine whether broader changes were needed beyond that engine type.

The FAA is working on additional responses to the NTSB, a spokesman said Tuesday.

The engine failure Saturday was the third in a string of strikingly similar incidents involving the same type of Pratt & Whitney-made engine on Boeing 777 aircraft. In all three cases, a fan blade showing signs of fatigue largely broke off, and a second blade was also fractured. In all three cases, damaged engine coverings broke off.

Pratt & Whitney, a unit of

, declined to comment Tuesday. On Sunday the engine maker said it was working with regulators and investigators.

The FAA said it had been in the process of evaluating a Dec. 4 engine failure on a Japan Airlines flight to Tokyo when the weekend incident happened.

A shielding ring surrounding the engine is designed to prevent rapidly spinning internal parts from shooting through the engine’s outer casing.

Ray Valeika, a former maintenance and engineering chief at

said the prospect that a broken fan blade can shoot forward out of the engine rather than through the sides of the casing necessitates a new approach to how these elements are designed and approved by regulators. It is possible, he said, that more-efficient fan blades aren’t behaving in the way that regulators expected when the testing systems and regulations were designed.

“We have to think differently about containment,” he said. “I think there needs to be a design review and a fault analysis review to see if we need to change the design criteria,” he said.

Engines are tested to make sure they can survive if a fan blade breaks off. But those tests differ from conditions during flight in key ways, according to a safety board report following a 2018 engine failure on another United flight to Hawaii, also linked to a weakened fan blade that broke off. In that incident, fan blade fragments spiraled forward and engine covering pieces broke off.

The NTSB’s report last year didn’t recommend changes to the testing procedure. The board previously had recommended that the FAA require engine makers and aircraft manufacturers to work together to ensure the structures that house the engines can withstand impact from fan blades. A spokesman for the NTSB said Tuesday that any new recommendations following from Saturday’s incident would come after an exhaustive investigative process, expected to take 12 to 18 months, unless an urgent safety issue is found.

Write to Alison Sider at alison.sider@wsj.com