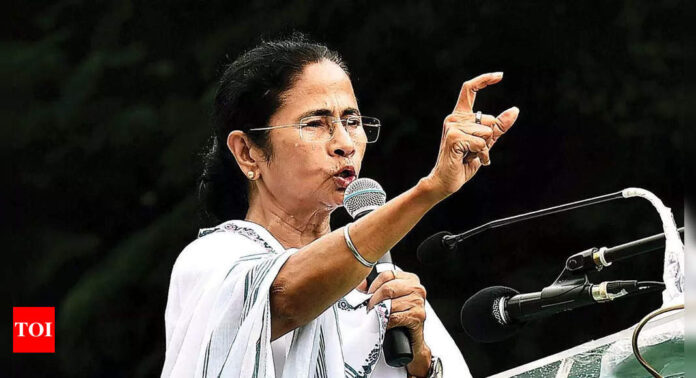 NEW DELHI: Less than a week after West Bengal chief minister Mamata Banerjee set the opposition camp aflutter with her statement that NDA presidential candidate Droupadi Murmu could have been the joint consensus candidate if the government had made a serious effort to reach out to the anti-BJP bloc, it has been decided that the joint opposition presidential nominee Yashwant Sinha will not campaign for votes in West Bengal and in his home state Jharkhand, where UPA ally Jharkhand Mukti Morcha has also taken a U-turn.
Ostensibly, Sinha’s decision to not campaign in Bengal follows Banerjee’s assurance to him that “she will take care of things there”.
However, considering that Trinamool Congress and Banerjee were eager to take credit for organising the opposition for the presidential polls, and for proposing Sinha’s name as the joint candidate for the July 18 presidential polls, the move to keep Sinha away from Bengal betrays Banerjee’s growing fears that not backing Murmu could upset the party’s tribal vote banks in the Junglemahal and North Bengal.
That Murmu represents the Santhal tribe, which accounts for nearly 80% of Bengal’s tribal population, makes Banerjee’s tightrope walking even harder.
The opposition camp’s troubles, though, are not limited to West Bengal. Sinha, sources said, will also skip a visit to his home state Jharkhand, where the Shibu Soren-led JMM has delivered a volte-face by backing Murmu’s candidature even while it remains a UPA ally and runs a coalition government with Congress. He will, however, stop over briefly in Bihar, where he is expected to woo dissident groups within the JD(U).
Though the presidential race was a losing battle for the opposition camp to begin with, its chances have grown dimmer as polling day approaches, not only because of JMM’s last-minute desertion, but also because of the changed equations in Maharashtra and the vertical split within the Shiv Sena. From starting off on a note where the opposition camp was expecting to put up a tight fight, as the D-Day approaches, the distance to the finishing line is growing wider.
What is more, the presidential race will also cast a shadow over the vice-presidential polls due next month, where the chosen opposition nominee will be faced will even bleaker chances.