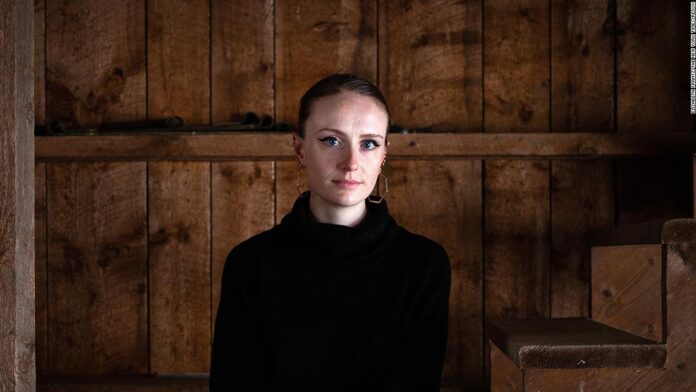 Bennett was asked what made her think Cuomo was trying to sleep with her.

“Without explicitly saying it, he implied to me that I was old enough for him and he was lonely,” Bennett said.

Bennett said the governor told her he was looking for a girlfriend and also asked if she was sensitive to intimacy. She said she was in Cuomo’s office last June taking dictation when he made the remarks.

“And then he explains, at that point, that he is looking for a girlfriend. He’s lonely, he’s tired,” Bennett said.

“He asked if I had trouble enjoying being with someone because of my trauma,” Bennett added, explaining that she had previously told the governor that she had a history of sexual assault.

Bennett also said Cuomo asked her if age difference mattered in a relationship, saying that he had said “he was fine with anyone over 22.”

Bennett, a 25-year-old former executive assistant and health policy adviser to Cuomo, first told her story to the New York Times last week. Bennett told the Times that the governor had asked her a series of personal questions, including stating that he was open to relationships with women in their 20s.

She told the Times that she interpreted the exchange — which she said took place in June, while the state was in the throes of fighting the pandemic — as what the newspaper called “clear overtures to a sexual relationship.”

Bennett said she felt ashamed when thinking about coming forward with her claims. “I feel like people put the onus on the woman to shut that conversation down,” Bennett said. “And by answering, I was somehow engaging in that or enabling it, when in fact I was just terrified.”

In his initial response to Bennett’s story in the Times last week, Cuomo said he believed he had been acting as a mentor and had “never made advances toward Ms. Bennett, nor did I ever intend to act in any way that was inappropriate.”
Cuomo issued a more direct apology in a press briefing on Wednesday, his first since the harassment allegations were made public.

“I now understand that I acted in a way that made people feel uncomfortable. It was unintentional and I truly and deeply apologize for it. I feel awful about it, and frankly, I am embarrassed by it, and that’s not easy to say but that’s the truth,” Cuomo said.

In a statement released after Cuomo’s apology on Wednesday in which he did not mention Bennett by name, Debra Katz, an attorney for Bennett, said the news conference was “full of falsehoods and inaccurate information” and rejected Cuomo’s claim that he didn’t know he was making anyone uncomfortable.

“My client, Charlotte Bennett, reported his sexually harassing behavior immediately to his Chief of Staff and Chief Counsel. We are confident that they made him aware of her complaint and we fully expect that the Attorney General’s investigation will demonstrate that Cuomo administration officials failed to act on Ms. Bennett’s serious allegations or to ensure that corrective measures were taken, in violation of their legal requirements,” Katz said.

In her interview with CBS, Bennett said she watched Cuomo’s televised briefing, which she did not accept as an apology from the governor.

She called Cuomo a “textbook abuser” and felt that he was grooming her.

“He is a textbook abuser. He lets his temper and his anger rule the office, but he was very sweet to me for a year in the hopes that maybe one day, when he came onto me, I would think that we were friends or it was appropriate or that it was OK,” Bennett said.

Bennett said her professional relationship with the governor took a turn on May 15, when Cuomo allegedly started asking her about her love life and commented to her about her history of sexual assault.

“I think it’s really strategic. I think abusers look for vulnerabilities, previous traumas, the idea that maybe I’m more willing to accept behavior because I have a history of sexual violence. Perhaps I’m not as confident in myself because of my history,” Bennett said.

Cuomo’s office directed CNN to the governor’s comments from Wednesday’s news conference when asked for comment on Bennett’s interview with CBS.

Bennett was the second woman to come forward with allegations of sexual harassment against Cuomo. Lindsey Boylan, a former aide to the governor, alleged that in 2018 Cuomo kissed her on the lips following a one-on-one briefing in his New York City office.

Boylan told Harper’s Bazaar in an interview published earlier Thursday, “I just want the abuse to stop. I’m really not focused on punishment. I’m focused on accountability. And I think we’re seeing somewhat the way the governor (and his administration) operates, the way that they are, and it’s being seen in real time.”

“And I think that’s really unfortunate, but probably necessary,” she said.

Another woman, Anna Ruch, told the Times — in an account that was corroborated to CNN by a friend — that Cuomo made an unwanted advance toward her during a crowded wedding reception in New York City in 2019.

Still, in his news conference Wednesday, Cuomo flatly rejected calls for his resignation and pleaded with New Yorkers to wait for the state attorney general to issue a report on the matter before forming an opinion on his alleged transgressions.

The pending inquiry, though, could take months to complete, and Cuomo seized the news conference spotlight in an effort to push back against calls for him to immediately step down.

“I never knew at the time that I was making anyone feel uncomfortable,” he said.