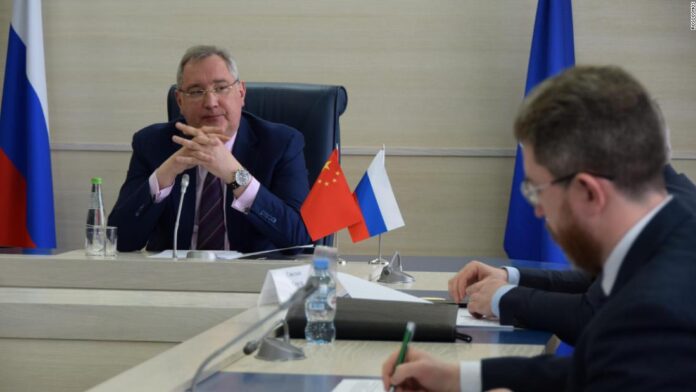 The leaders of the two countries’ respective space agencies signed a memorandum of understanding on behalf of their national governments.

“China and Russia will use their accumulated experience in space science, research and development as well as the use of space equipment and space technology to jointly develop a road map for the construction of an international lunar scientific research station (ILRS),” China’s space agency said.

A statement from Russian space agency Roscosmos said the two organizations planned to “promote cooperation on the creation of an open-access ILRS for all interested countries and international partners, with the goal of strengthening research cooperation and promoting the exploration and use of outer space for peaceful purposes in the interests of all mankind.”

The lunar space station will be “a complex of experimental and research facilities” created on the moon’s surface and/or in orbit of the moon, according to the Roscosmos statement. The facilities will be designed for a range of multidisciplinary research, including “testing technologies with the possibility of long-term unmanned operation with the prospect of human presence on the moon.”

China and Russia will now work on a road map for how to design, develop, and operate the station, and plan “its presentation to the world space community,” Roscosmos said.

The two countries have also signed agreements to jointly create a data center for the exploration of the moon and deep space. They plan to cooperate in the future on China’s Chang’e-7 and Russia’s Luna 27 missions, which both aim to survey the lunar south pole.

Russia was a founding partner of the International Space Station (ISS), alongside the United States and other contributing nations and space agencies. The orbiting science laboratory marked its 20th anniversary of continuous human occupation in November last year. To date, the ISS remains mankind’s only operational and permanently inhabited space station. Unlike Russia, China is not involved in ISS initiatives, however, owing in part to US federal legislation barring co-operation with Beijing on space projects.
Russia traces its space program back to the Soviet Union, which in 1957 became the first country to launch a satellite — Sputnik 1 — out of Earth’s gravitational grip.

Amid a Cold War space race with the United States, the Soviets in 1960 sent the first living creatures into orbit and back again, including space dogs, Belka and Strelka. Then in 1961, Soviet cosmonaut Yuri Gagarin pipped the Americans into space.

In recent years however, Russia has struggled to replicate its early space program success, experiencing a string of setbacks including probe launch failures against a backdrop of funding cuts and alleged corruption.

China was late to the space race — it didn’t send its first satellite into orbit until 1970, by which time the US had already landed an astronaut on the moon — but it has caught up quickly.

Buoyed by billions of dollars in government investment, China has rapidly accelerated its space program over the past decade, firing space labs and satellites into orbit.

In 2019, China became the first country to send an unmanned rover to the far side of the moon. In July 2020, China launched its first unmanned mission to Mars — the Tianwen-1 probe, which entered the red planet’s orbit in February this year. The next step will be landing a rover on the surface, which is expected to come in May or June.

And in December 2020, China’s unmanned Chang’e mission brought lunar samples back to Earth — making it only the third country to successfully collect rocks from the moon.

Plans are also underway to send astronauts to the moon by the 2030s. If successful, China would become only the second country after the US to put a citizen on the moon.