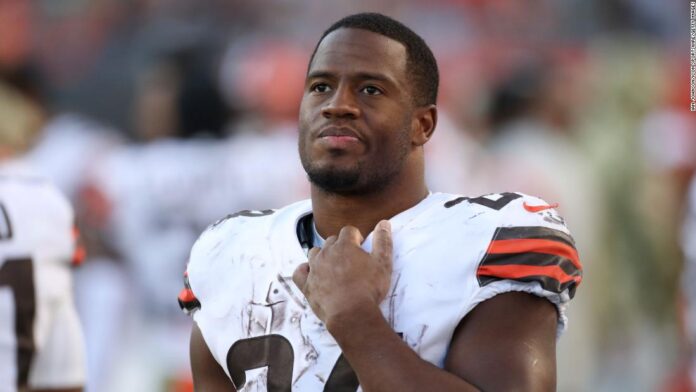 Superstar Nick Chubb and Demetric Felton have been placed on the team’s reserve/Covid-19 list, the team announced.
The NFL reported that both backs are vaccinated so there is a chance they could play on Sunday. According to the NFL’s Covid-19 protocols, each player would need to return two negative tests 24 hours apart to play.

John Kelly, another Browns running back, was placed on the reserve/Covid-19 list on Monday.

With the Browns’ other star running back Kareem Hunt still on injured reserve, D’Ernest Johnson was the only healthy running back on the team’s roster until they signed Brian Hill to the practice squad.

The Browns confirmed to CNN that due to recent positive Covid cases, the team is in the NFL’s enhanced protocols. That means virtual meetings, masks in the building and increased testing.

If Chubb is to miss out, it would be a massive blow for the run-heavy Cleveland team, as he has developed into the most important cog of the team’s offense.

In Cleveland’s Week 9 domination of division rivals the Cincinnati Bengals, Chubb rushed for 137 yards and two touchdowns on just 14 carries.

This season, Chubb has rushed for 721 yards, despite missing two games. In his three full seasons in the NFL, he has passed the 1,000-yard rushing mark on two occasions, only narrowly missing out on the achievement in his rookie season by four yards.

Johnson has shown he can carry the Browns offense in Chubb’s absence though. In Week 7, the 25-year-old rushed for 146 yards and a touchdown in what was his first NFL start, helping the Browns to a 17-14 victory over the Denver Broncos.