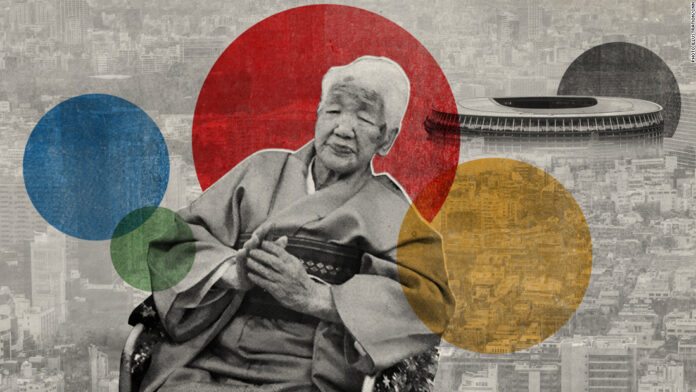 Kane Tanaka, who has twice survived cancer, lived through two global pandemics and loves fizzy drinks, will take the flame as it passes through Shime, in her home prefecture of Fukuoka.

While Tanaka’s family will push her in a wheelchair for most of her 100-meter (about 328 feet) or so leg, the supercentenarian — a person aged over 110 years old — is determined to walk the final few steps, as she passes the torch to the next runner.

CNN spoke exclusively with Tanaka, who has a new pair of sneakers for the event — a gift from her family on her birthday in January.

“It’s great she reached that age and she can still keep up an active lifestyle — we want other people to see that and feel inspired, and not to think age is a barrier,” said her grandson Eiji Tanaka, who is in his 60s.

Tanaka was born in 1903 — the year aviation pioneers Orville and Wilbur Wright made history by completing the world’s first powered flight.

She went on to have four children with the rice shop owner she married at 19 years old, and worked in the family store until she was 103. She has five grandchildren and eight great-grandchildren.

She lived through two world wars and the 1918 Spanish flu, although her grandson Eiji said: “I don’t remember her talking much about the past … She’s very forward thinking — she really enjoys living in the present.”

And she is almost as old as the modern Olympic Games, which began in 1896.
When the Olympics were last held in Tokyo in 1964, Tanaka was 61 years old. When counting both the summer and winter editions of the games, this year’s Olympics will be the 49th of her lifetime.
Tanaka now lives in a nursing home, where she usually wakes at 6 a.m. and enjoys playing the strategic board game, Othello. Tanaka’s family, who have not been able to visit her for 18 months during the Covid-19 pandemic, said staying curious and doing math are her secrets to keeping the mind sharp and body healthy.

Tanaka is by no means Japan’s only centenarian.

For the first time last year, Japan recorded more than 80,000 centenarians, according to the country’s Health, Labor and Welfare Ministry — marking the 50th consecutive annual increase.
In 2020, one in every 1,565 people in Japan was over 100 years old — more than 88% of them women.

In Japan, women have a life expectancy of 87.45 years compared to 81.4 for men, government figures released in July 2020 showed.

In 2019, the Guinness Book of World Records certified Tanaka as the world’s oldest living person, and now she has her sights on another milestone — the record for the oldest person to ever live is held by a French woman, who died age 122.
“(Kane) said she wants to break that record,” said Eiji Tanaka, her grandson.

Tanaka’s family said she hasn’t been doing any training for the torch relay, but is excited to be a part of the Olympics.

But he warned her participation in May — which is sponsored by a Japanese life insurance company — will depend on her health and weather conditions.

The torch will first go through regions affected by the devastating 2011 Tohoku earthquake and tsunami, marking the disaster’s 10th anniversary, before traveling “around every corner of Japan,” officials said.

Those who wish to view the relay from the roadside must wear masks, stay home if they feel unwell, and refrain from traveling outside the prefecture they live in.

Spectators have also been told to “support with applause … rather than by shouting or cheering.” The relay will be streamed live online.

Torchbearers will be required to fill out a daily health checklist two weeks before the relay and refrain from activities that may involve a risk of infection, such as eating out or going to crowded places, officials advised.

She tweets photos of her great-grandmother enjoying treats such as cake and soda pop, and shares her achievements and the exchanges she has with her relatives.

“I started a Twitter feed on her because it’s quite amazing that at 118 she drinks Coca-Cola herself and plays Othello,” Junko Tanaka said. “I might be biased because I’m related to her but I think it’s kind of amazing — I wanted to share that with the world and for people to feel inspired and to feel her joy.”