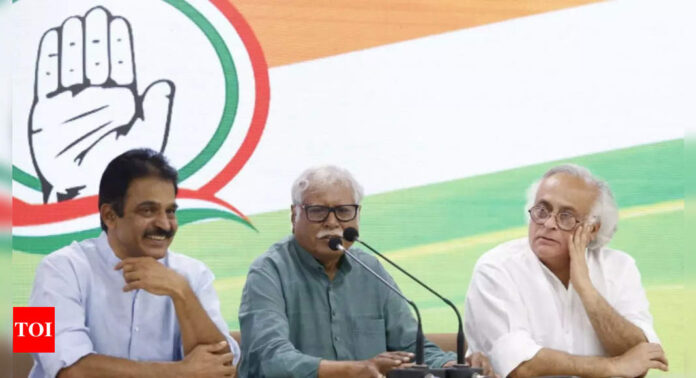 NEW DELHI: The election to the Congress president’s post is getting mired in one controversy or the other with each passing day. In the latest row, senior party leaders have questioned the constitutionality of the voters’ list.
After veteran Congress leader Ghulam Nabi Azad’s resignation on August 26 and the continuous frontal attack on party leader Rahul Gandhi since then, a couple of senior leaders of the organisation have raised questions over the very veracity of the electoral roll for the president’s election scheduled to be held on October 17.
Two Congress Lok Sabha MPs – Manish Tewari from Sri Anandpur Sahib in Punjab and Karti Chidambaram from Sivaganga in Tamil Nadu – on Wednesday alleged that the party’s presidential election could not be held in a free and fair manner without a transparent and well-defined electoral roll.
In a series of four tweets, Tewari asked a few questions from Madhusudan Mistry, the chairperson of Congress’s central election authority (CEA) which is overseeing the election of party president.
Tewari said, “With great respect @MD_Mistry ji, how can there be a fair and free election without a publicly available electoral roll? Essence of a fair and free process is (that) names and addresses of electors must be published on @INCIndia website in a transparent manner. You are quoted as saying, ‘the list is not made public but if a member of our party wants to check, they can check at the PCC office. And, of course, it will be given to the candidates once they file their nomination papers’.”
Tewari told Mistry that the party’s highest decision-making body Congress Working Committee (CWC) has announced the schedule of party president’s election, not to 28 pradesh Congress committees (PCCs) and 8 territorial Congress committees (TCCs).
He asked, “Why should someone have to go to every PCC office in the country to find out who the electors are? This does not happen in a club election also with great respect.”
The former Union minister appealed to Mistry to make the voters’ list public. “In the interests of fairness and transparency, I urge your good self to publish the entire list of electors on @INCIndia website. How can someone consider running if he/ she does not know who electors are? If someone has to file his/ her nomination and gets it proposed by 10 Congresspersons, as is the requirement, CEA can reject it (by) saying they are not valid electors,” Tewari added.
Tewari is a member of G-23, a group of 23 Congress leaders who had written a letter to Sonia Gandhi in 2020 demanding internal reforms in the party. He has been demanding transparency, accessibility and an overhaul of the manner in which the party’s top leadership functions.
Karti Chidambaram, son of former Union finance minister P Chidambaram, also questioned the validity of the voters’ list.
In a tweet, Karti said, “Every election needs a well-defined and clear electoral college. The process of forming the electoral college must also be clear, well defined and transparent. An ad hoc electoral college is no electoral college.”
In another tweet, he said, “Reformists are not Rebels.”

Reformists are not Rebels.

Replying to other tweets, Karti said, “Can anyone tell the world who are all eligible to vote and on what basis they became eligible?… Absolutely we must have primaries in every constituency, but for that we need a defined and transparent members list. Today we claim we have membership numbers which no one has ever verified.”
Tewari agreed with Karti. Tagging the latter’s tweet, he said, “My colleague in Parliament @KartiPC is spot on. For any election to be kosher, the electoral college must be constitutionally constituted. I read in the papers @AnandSharmaINC had articulated this widely shared concern in the CWC and he even publicly confirmed that he had raised it.”

MyColleague in Parliament @KartiPC is spot on. For any election to be kosher the electoral college must be constitu… https://t.co/EXb7ASslli

With questions being raised about the constitutionality of the voters’ list, the election of the president may itself become controversial.