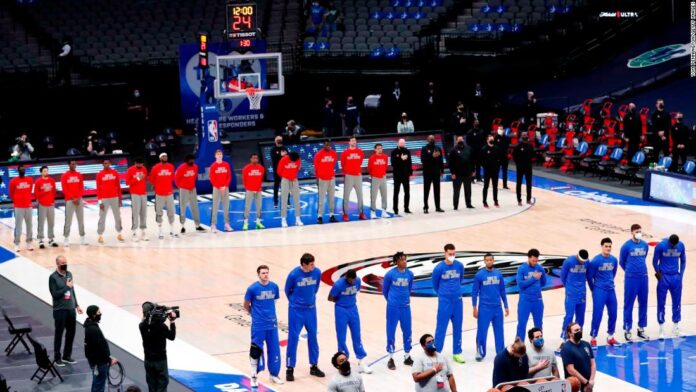 Earlier that same day, the team had confirmed to CNN that they had not been playing it ahead of their first 11 home games at the request of owner Mark Cuban.

In a statement by Cuban, he explained the decision saying: “We respect and always have respected the passion people have for the anthem and our country. But we also loudly hear the voices of those who feel that the anthem does not represent them. We feel that their voices need to be respected and heard, because they have not been.

“Going forward, our hope is that people will take the same passion they have for this issue and apply the same amount of energy to listen to those who feel differently from them. Only then we can move forward and have courageous conversations that move this country forward and find what unites us.”

However as the Mavericks welcomed back fans — 1,500 vaccinated essential workers, including first responders, medical personnel, transportation workers among others were in attendance — and following a statement from the NBA, the team chose to play the anthem ahead of Wednesday’s clash with the Atlanta Hawks.

The Mavericks eventually defeated the Hawks, 118-117.

League policy states that “players, coaches and trainers must stand and line up in a dignified posture along the foul lines during the playing of the American and/or Canadian national anthems.”

However, during the NBA restart in the Orlando bubble last summer, Commissioner Adam Silver declined to enforce the rule as players began kneeling for the anthem due to social justice concerns.

Cuban’s decision reverberated around America, including a question put to White House press secretary Jen Psaki during her daily briefing on Wednesday.

Psaki noted that she hadn’t spoken to President Joe Biden about the decision to cease playing the anthem at their games, “but I know that he’s incredibly proud to be an American. He has great respect for the anthem and all that it represents, especially for our men and women serving in uniform all around the world,” she added.

“He’d also say that, of course, that part of the pride of our country means recognizing moments where we as a country haven’t lived up to our highest ideals, which is often and at times what people are speaking to when they take action at sporting events,” Psaki continued. “And it means respecting the right of people, granted to them in the Constitution, to peacefully protest. That’s why he ran for president in the first place and that’s what he’s focused on doing every day.”

In an interview with ESPN’s Outside the Lines in June, Cuban said he hoped the league “would allow players to do what is in their heart” when it comes to the playing of the anthem.

“Whether it’s holding an arm up in the air, whether it’s taking a knee, whatever it is, I don’t think this is an issue of respect or disrespect to the flag or to the anthem or to our country. I think this is more a reflection of our players’ commitment to this country and the fact that it’s so important to them that they’re willing to say what’s in their heart and do what they think is right.”

He later said in the interview: “I’ll stand in unison with our players, whatever they choose to do. But again, when our players in the NBA do what’s in their heart, when they do what they feel represents who they are and look to move this country forward when it comes to race relationships, I think that’s a beautiful thing and I’ll be proud of them.”

Maegan Vazquez contributed to this report.

As Aston Martin are welcomed back to F1, Sebastian Vettel admits he almost walked away from the sport

Barcelona given some respite from off-field issues with stunning comeback