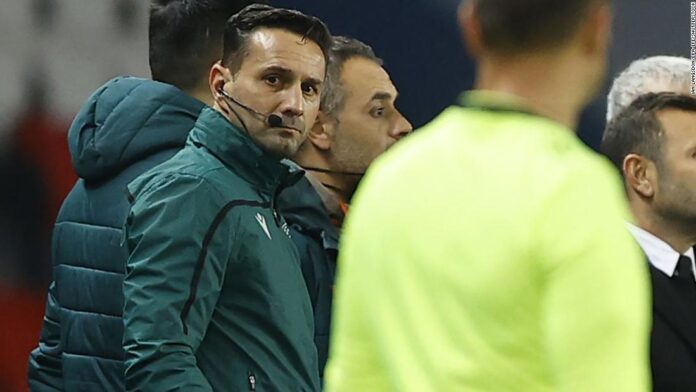 The group stage match on December 8 was suspended inside the opening 15 minutes after both sets of players walked off the pitch in apparent protest against an alleged racist comment made by Colţescu towards Basaksehir’s assistant coach Pierre Webo, who is Cameroonian.

An investigation conducted by a UEFA Ethics and Disciplinary Inspector concluded that Colţescu did, however, display “inappropriate behaviour during a UEFA match for which he was appointed.”

He has subsequently been suspended from carrying out any refereeing function until the end of the 2020-21 season, which is June 30, 2021.

Sovre has been reprimanded for “inappropriate behaviour.”

Both officials have been ordered to attend an educational program before June 30 under conditions determined by the UEFA refereeing services.

UEFA said in a statement that officials should be “adequately and specifically trained to make better decisions on the choice of language and words to be used in UEFA competitions.”

The statement added: “In the international context, correct use of language is essential to avoid situations such as those that occurred in the above-mentioned match.”

The governing body also announced that Webo would serve a one-game suspension in UEFA competitions for “unsporting conduct.”

The Romanian Football Federation, PSG and Basaksehir did not immediately respond to CNN’s request for comment on UEFA’s announcement.

UEFA put a new refereeing team in place to officiate the resumption of the Champions League match between PSG and Basaksehir on December 9, which the French club won 5-1.