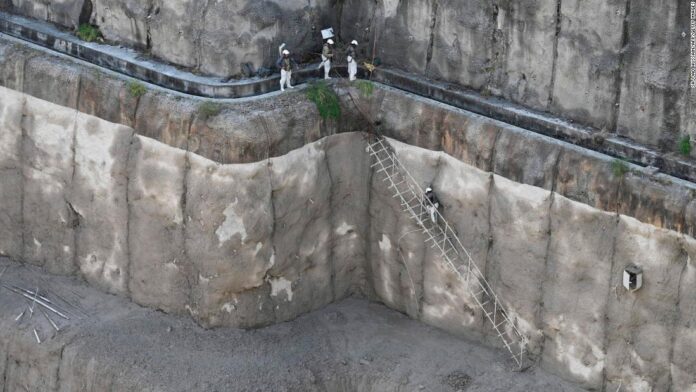 Rana was lucky. He saw the disaster unfold from above in the village of Raini, where he was building a new railroad for the Hyderabad-based Rithwik Railway Company. But several of his co-workers below were unable to see the danger down the road.

Those from the higher vantage point screamed to warn them.

“The five or six people who heard them ran. Some people were saved,” Rana said.

The rest are among the nearly 200 people still missing after part of a glacier collapsed on Sunday in the northern Indian state of Uttarakhand, causing a massive avalanche that tore through a mountain gorge and crashed through a dam.

Authorities were able to save a handful of individuals immediately after the disaster, and another 126 people from the nearby Niti Valley were rescued by helicopter.

Three days after the tragedy, the search for survivors continues. So far, the bodies of 32 people have been found — and as the clock keeps ticking, hope is dimming for those still unaccounted for.

A handful of villages in the remote region, where roads are few and far between, are now cut off from the outside world, including Rana’s home of Pan, where his wife is stuck.

It’s not exactly clear what caused the piece of the glacier to fall off, triggering the avalanche. Indian Home Minister Amit Shah told parliament a landslide triggered a “snow avalanche” that spread across 14 square kilometers (5 square miles), causing flash floods.

Manish Mehta, a senior scientist at Wadia Institute of Himalayan Geology, who is inspecting the site with four colleagues, said preliminary evidence shows a “huge rock slide” near the glacier may be to blame for triggering the avalanche. The scale of the ensuing flash flood was unprecedented, he added, and could affect “more than 100 square kilometers (38 square miles).”

Dr. Dan Shugar, a professor with the University of Calgary’s Department of Geoscience, said in a tweet Tuesday that analysis “suggested a landslide that took out part of a hanging glacier.”

“The glacier that we think collapsed is a very steep, hanging glacier. It is not a typical valley glacier, with low gradient/slope, that sometimes have lakes at the terminus,” Shugar said, adding that the landslide likely contained both bedrock and glacier ice. “It descended a steep slope and likely disintegrated when it hit the valley floor.”

Authorities described Sunday’s landslide as a freak event, yet the ecologically sensitive Himalayan region is prone to flash floods and landslides. Himalayan glaciers are also vulnerable to rising global temperatures because of man-made climate change.

As the ice melts, glaciers become unstable and start to retreat. A 2019 study found Himalayan glaciers are melting twice as fast as last century, losing almost half a meter (1.6 feet) of ice each year.

Others have pointed to construction along the state’s rivers, which in recent years have seen an increasing number of hydroelectric dams, projects and infrastructure connecting them, such as roads and new developments.

Dozens of workers building a series of underground tunnels for a new power plant near the dam were trapped by the avalanche Sunday, including Virendra Kumar Gautam. That day, at about 11 a.m., he and his team heard shouts from outside the tunnel, telling them to evacuate.

He ordered his team to move. After traveling about 50 meters (164 feet), Gautam recalled, “suddenly a flood entered, glacier and water entered in full force.”

Gautam and the others climbed emergency ladders built into the walls. Their section of the tunnel was only about 4.5 meters (14.5 feet) tall, but water quickly reached about 3.5 meters high (11.5 feet).

“I kept helping people climb up and telling them that they would survive and shouldn’t worry, everything will be fine,” he said.

Gautam was right. The water level suddenly reduced, he said, becoming shallow enough for the group to pass and climb about 350 meters (1,150 feet) up the emergency ladders to the surface.

Gautam said it took his team about 90 minutes, but eventually they made it to safety.

Others were not so lucky, however. There are still people trapped in the tunnels, and authorities say those inside may not have survived unless the debris somehow blocked the water and left enough air in the tunnels for the men to breathe.

Vidhyadhar Maletha, an employee at Prithak company overseeing rescue efforts, said the four side tunnels and the main tunnel have all been filled with debris.

“There is too much debris,” Maletha said.