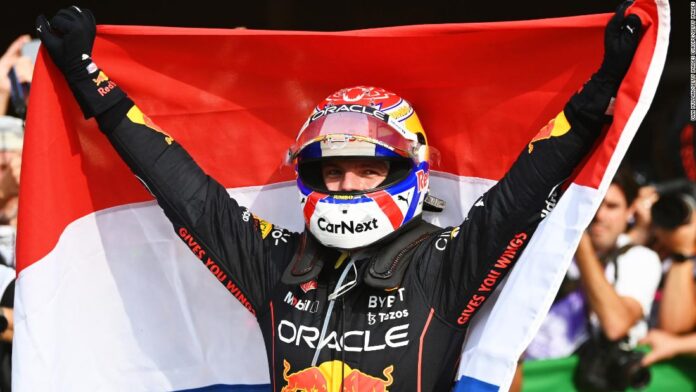 Verstappen stormed past Lewis Hamilton in the closing stages after some safety car drama to send the 100,000 Dutch fans into a frenzy at Zandvoort.

The 24-year-old was greeted by orange flares and a sea of orange shirts as he crossed the finish line to claim his second straight victory at the Dutch Grand Prix.

Mercedes’ George Russell equaled his best finish in F1 with a distant second place and Ferrari’s Charles Leclerc came in third, leaving Hamilton to finish a disappointing fourth after it looked for a while he might challenge Verstappen for the win.

“It was not a straightforward race but we had to push,” Verstappen told Sky Sports after the race. “Of course with safety car, virtual safety car, making the right calls.

“It’s always special to win your home grand prix. This year I had to work for it even more. An incredible weekend and I’m really happy we won the Dutch Grand Prix. I’m proud to be Dutch.”

After a relatively straightforward start to the race, a bizarre series of events began to unfold on lap 45, as Yuki Tsunoda brought his car to a stop at the side of the track, seemingly concerned that one of his tires was loose.

With a safety car imminent, Tsunoda was told by his team that his tires were fine and the Japanese driver continued his race, only to slowly make his way into the pit lane. The AlphaTauri pit crew checked Tsunoda’s wheels and his seat belt, before deciding everything was in working order and sent their man back out to race.

However, almost immediately, Tsunoda once again felt something was wrong with his car and was finally told by his team to stop on the track.

The virtual safety allowed Red Bull, AlphaTauri’s parent team, to save valuable seconds while Verstappen came into the pits for a fresh set of tires and allow the Dutchman to reemerge still in the lead and ahead of Hamilton and Russell.

That wasn’t the end of the drama, though, as engine trouble forced Valtteri Bottas to bring his Alfa Romeo to a stop on the main straight, causing the safety car to be deployed.

Mercedes initially kept both Hamilton and Russell out on the track, while Red Bull brought Verstappen into the pits for another set of new tires, causing him to drop to third.

But Russell did come into the pits after requesting fresh tires, allowing Verstappen a clear run at Hamilton and an easy overtake once the safety car went back in and the racing resumed.

After seeing his teammate pass him soon after, a furious Hamilton berated his team over the radio. “I can’t believe how much you guys f**ked me,” he said.

“Sorry about that Lewis,” Hamilton’s race engineer, Pete Bonnington, told his driver after the race, per Sky Sports. “It was looking good but we’ll sit down and review decisions that we made there.”

That will come as little consolation, though, as Hamilton still awaits his first race win of the season.

Verstappen’s victory extends his lead at the top of the driver’s standings to 109 points. With seven races remaining this season, it would take something remarkable to prevent him from claiming his second consecutive F1 title.