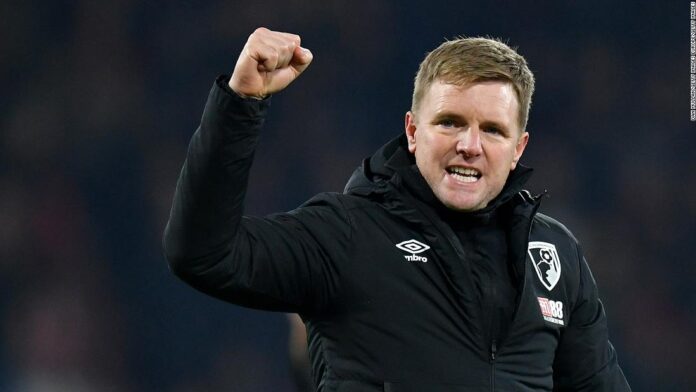 The Englishman replaces Steve Bruce who was sacked by mutual consent in October having failed to win a game this season.

“It is a great honour to become head coach of a club with the stature and history of Newcastle United,” Howe said in the statement. “It is a very proud day for me and my family.

“This is a wonderful opportunity, but there is also a lot of work ahead of us and I am eager to get onto the training ground to start working with the players.

“I would like to thank the club’s owners for this opportunity and thank the club’s supporters for the incredible welcome they have already given me. I am very excited to begin our journey together,” Howe added.

Howe’s first game in charge will be on November 20 when Newcastle host newly-promoted Brentford at St. James’ Park.

It’s the 43-year-old’s first managerial job since August 2020 when he left Bournemouth following the club’s relegation from the English Premier League.

Howe spent 11 years as a player at Bournemouth before taking over the managerial reins of the club.

He managed Bournemouth across two spells guiding the club from the fourth tier of English football all the way to the Premier League, where they remained for five seasons.

Howe is only one of a handful of managers ever to lead their team through all three divisions to Premier League promotion.

Newcastle United co-owner Amanda Stavely said: “We have been incredibly impressed by Eddie through what has been a rigorous recruitment process.

“As well as his obvious achievements with AFC Bournemouth, where he had a transformational impact, he is a passionate and dynamic coach who has clear ideas about taking this team and club forward.

“He is a great fit for what we are trying to build here. We are delighted to welcome Eddie and his staff to St. James’ Park and very much look forward to working together towards our collective ambitions.”

The Englishman is familiar with Newcastle players Callum Wilson, Ryan Fraser and Matt Ritchie having worked with them during his time at Bournemouth.

Howe takes over a Newcastle side who find themselves in the relegation zone and are the only team not to win a Premier League game this season.

The club sit 19th in the table on five points — six off of safety.