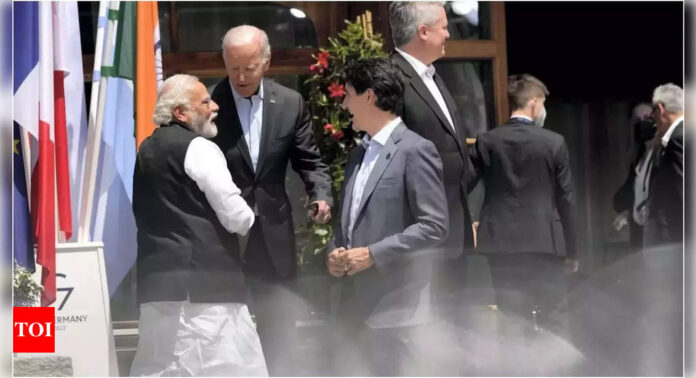 Prime Minister Narendra Modi held a series of bilateral meetings on the sidelines of the G7 summit, including with the leaders of EU, Germany, Canada, Indonesia and South Africa. One of his most significant engagements was with Justin Trudeau, their first in-person bilateral meeting since comments by the Canadian PM on the farmers protest in India led to a freeze in ties.
The situation in Ukraine was discussed in most meetings with Modi underlining India’s position that dialogue is the only way to end the imbroglio.
Struggling to choke off Russia‘s revenue to fund the war, G7 leaders on Monday moved close to embracing an aggressive but untried plan to manipulate the price of oil, the largest commodity market in the world (See full report on ).
Modi also had a casual meeting with French President Emmanuel Macron and exchanged greetings with US President Joe Biden.
Modi congratulated Indonesian President Joko Widodo on Indonesia’s ongoing G-20 presidency and discussed India’s forthcoming G-20 presidency. They also exchanged views on global and regional issues of mutual interest, said the government in a statement.
In another bilateral with German Chancellor Olaf Scholz, Modi thanked him for the invitation to the G7 Summit and discussed ways to take forward their Green and Sustainable Development Partnership. “Discussions covered issues like climate action, provision of climate financing and technology transfer. Greater coordination in international bodies, particularly in the context of India’s forthcoming G-20 presidency, was discussed. The two leaders also exchanged views on regional and global developments,” said the government.
Modi and South African President Cyril Ramaphosa welcomed the WTO agreement reached in June that supports production of Covid-19 vaccines in developing countries, said the government. India and South Africa had submitted the first proposal suggesting a waiver for all WTO members on the implementation of certain provisions of the TRIPS Agreement in relation to the prevention, containment or treatment of Covid-19.

G7 and India: Must protect freedom of expression
India signed on to a G7 joint statement on ‘Resilient Democracies’ that called for protecting the freedom of expression and opinion, both online and offline, while underlining the need to foster open and pluralistic civic spaces. Citing significant threats to democratic systems around the world, G7 and guest countries said they remained steadfast in their commitment to defending peace, human rights, the rule of law, human security and gender equality, as recognised by international law, including the United Nations Charter, and called on their international partners to join them in these efforts. The statement said democracies enable open public debate, independent and pluralistic media and the free flow of information online and offline, fostering legitimacy, transparency, responsibility and accountability for citizens and elected representatives alike.
G7 may manipulate oil price to punish Russia
Struggling to choke off the revenue that enables Russia to finance its invasion of Ukraine, and hoping to shield consumers at home from the war’s economic pain, leaders of the G7 nations on Monday moved close to embracing an aggressive but untried plan to manipulate the price of oil, the largest commodity market in the world. The plan – which would allow Russia to keep selling oil to the world but would sharply limit the price – is an acknowledgment that the embargoes the US and allies swiftly imposed on Moscow’s lucrative energy exports have not dented Russian oil revenues. And they have driven up gasoline and other fuel prices, prompting consumer backlash in the US and Europe.
At the same time, the broader economic sanctions the West put in place to try to cripple the Russian economy have so far fallen short, though economists forecast that it will shrink almost 10% this year. The rouble has fully recovered from sharp early losses.
Militarily on Monday, Moscow pushed forward with slow but steady gains in Ukraine’s east, imposing heavy casualties on Ukraine’s army, while also maintaining persistent shelling of cities both on the Black Sea coast and in the north near the Russian border. On Sunday, the G7 leaders said they were banning imports of Russian gold, another sign that the West is looking for new ways to isolate Moscow from the world financial system. The effort to put a price cap on Russia oil is the brainchild of Janet Yellen, President Biden’s treasury secretary. The details are likely weeks or more away from being finalized, requiring intense negotiations by G7 finance ministers, private companies and leaders of countries in Latin America, Africa and elsewhere that buy Russian oil.
And there is no guarantee that the plan will come together quickly, or at all, or that it will succeed as the G7 leaders hope.
There is also a potential political downside in Europe and possibly the US: To succeed, the plan will need to give China, India and other countries that have not joined the G7 in opposing Russia’s invasion of Ukraine the ability to buy oil at a much lower price than America or much of Europe can. (NYT)