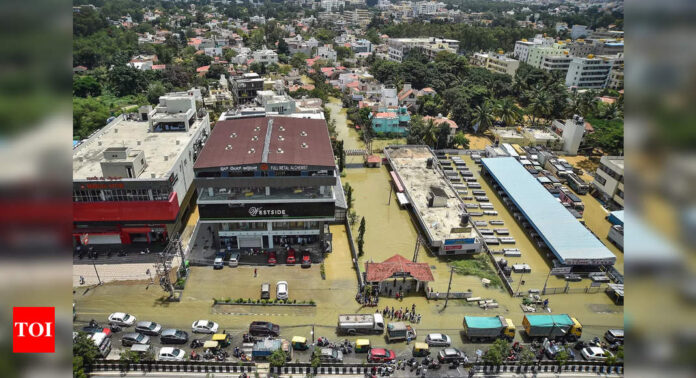 NEW DELHI: The situation in several parts of rain battered Bengaluru, by and large continued to remain the same on Tuesday, with streets waterlogged, houses and vehicles partially inundated, as torrential downpour lashed the capital city on September 5 night.
Using boats and tractors to cross the streets submerged in water by office goers and school children was a common sight this morning in several parts of the city like Yemalur, Rainbow Drive layout, Sunny Brooks Layout, Marathahalli among several others.
Bengaluru inundated: Heavy monsoonal rain has flooded India’s tech capital, leaving roads waterlogged and several areas inundated. Social media is flooded with videos and photographs, showing an inundated Bengaluru. In some localities, tractors and boats were used to ferry students and office goers on Monday morning.
Why: Bengaluru received over 13 cm rainfall on Monday, with some areas receiving upto 18 cm. This excessive rainfall is attributed to a shear zone that has developed in southern Karnataka, engulfing Bengaluru within its ambit. A shear zone is a monsoon weather condition with opposing winds bringing heavy rain-bearing clouds over an area.
More to come: The IMD has predicted more heavy rains on Tuesday. Thunderstorms and lightning may continue in Karnataka for the next five days. The administration said the supply of Cauvery water to several parts of Bengaluru would be hit for the next two days.
Why Bengaluru chokes: It has become a regular feature. The primary reason is that the stormwater drains that criss-cross Bengaluru are old, decayed and lack capacity. A rainfall of 5-10cm is enough to have the drains brimming.
Who is to blame? Drains have been reduced to dumpyards, with citizens discarding trash in them. Illegal constructions — residential and commercial — on the banks of stormwater drains are ubiquitous, leaving no outlet for water. When it pours, water flows wherever it can. Encroachments allegedly happened with connivance with or neglect of the municipal officials. The city administration has also reportedly been slow in cleaning up the drains.
What now? CM Basavaraj Bommai said, “There have been heavy rains in Bengaluru…I have asked officials to depute two State Disaster Response Fund teams to Mahadevapura and Bommanahalli localities that have been worst affected, with boats and other equipment, and also to send engineers are there [for repair work].”