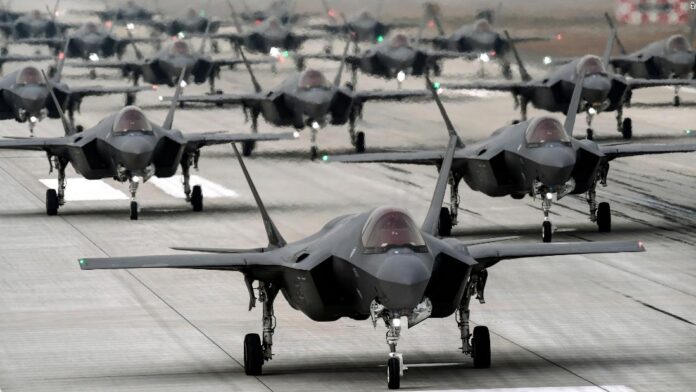 Six US Air Force F-35As from Eielson Air Force Base in Alaska arrived in South Korea on Tuesday and will fly with F-35s from the host nation in a series of exercises ending July 14, the two militaries said.

“This deployment is aimed at enhancing the interoperability of (our air forces) while demonstrating the strong deterrence and joint defense posture of the alliance,” the South Korean Defense Ministry said.

A South Korean spokesperson said this is the first time stealth fighters from the two allies have worked together.

Experts say stealth fighters able to evade Pyongyang’s radars would be vital in any action against North Korea.

The deployment of the US fighters is a visible sign of the commitment US President Joe Biden made to his South Korean counterpart, Yoon Suk Yeol, when the two met in Seoul in May.

“Considering the evolving threat posed by (North Korea), both leaders agree to initiate discussions to expand the scope and scale of combined military exercises and training on and around the Korean Peninsula,” the White House said after the two presidents met. “Both leaders also reaffirm the commitment of the US to deploy strategic US military assets in a timely and coordinated manner as necessary.”

Tensions with North Korea have been increasing in recent months. Pyongyang has been testing missiles capable of carrying nuclear warheads at a record pace, with at least 17 launches this year.

The US military said the American F-35s would operate alongside other US aircraft during their deployment, without giving specifics.

But working with the South Korean F-35s is the main event.

The F-35 is one of the world’s most advanced fighter aircraft. The US operates hundreds of the jets, which come in three configurations, the conventional take-off and landing F-35As, flown by the Air Force; the Marine Corps’ F-35Bs, which can land vertically; and the F-35C, configured for aircraft carrier operations.

Like the US Air Force, the South Korean Air Force flies the F-35A, with its first jet delivered by manufacturer Lockheed Martin in 2018. Its fleet of 40 of the fifth-generation jets became fully operational this spring.

On March 25, a day after one of Pyongyang’s missile tests, Seoul staged an “elephant walk” of its F-35 fleet, lining up the jets all at once on a runway in a display of power.

“Using the F-35A stealth fighters, the invisible power capable of stealth infiltration and precise striking, we will achieve an overwhelming strategic victory and maintain a full military posture that will deter further actions by North Korea,” then-Defense Minister Suh Wook said during the elephant walk.

The last reported deployment of US F-35s to South Korea came in 2017, when they joined F-22 stealth fighters in what at the time was described as the largest concentration of fifth-generation fighter jets ever in South Korea.

Those warplanes were part of a massive annual US-South Korea exercise named Vigilant Ace, which was canceled later under the Donald Trump administration as the then-US President tried to entice North Korea’s Kim Jong Un into giving up his nuclear missile programs.

After three meetings between Trump and Kim failed to yield an agreement, North Korea has ramped up its missile program. The US and South Korea fear Pyongyang may try to test a nuclear weapon soon, something it has not done since 2017.