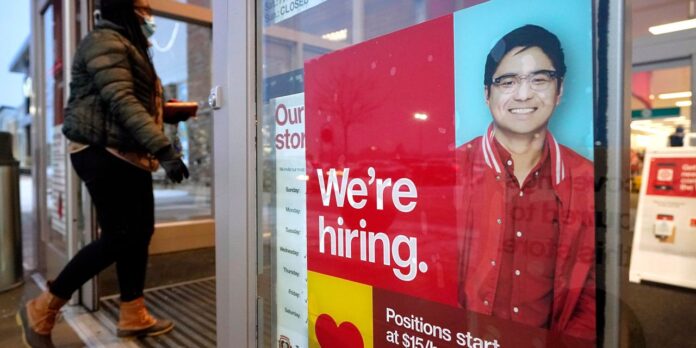 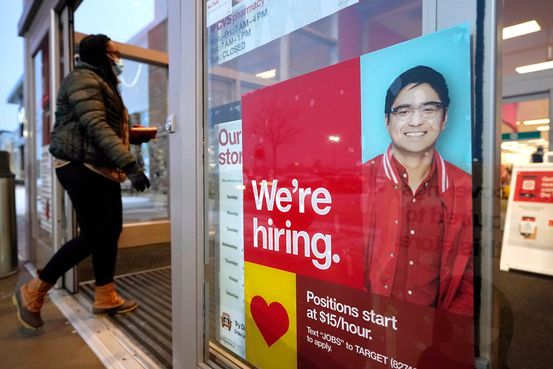 The U.S. economy is set up for a stronger recovery this spring after a February surge in hiring at restaurants and other hospitality businesses created the best monthly job growth since last fall.

The unemployment rate, determined by a separate survey, ticked down to 6.2% last month. The rate is well below a near 15% pandemic peak in April 2020, but remains above 2019’s 50-year lows. Overall, the U.S. has 9.5 million fewer jobs than a year earlier, just before the coronavirus pandemic took hold in much of the country.

In February, most of the job gains occurred in the leisure and hospitality sector, which includes restaurants, adding 355,000 jobs. There were smaller increases in temporary help services, manufacturing and healthcare.

The gains reflect reduced business restrictions, more people receiving vaccines, a lower level of Covid-19 infections and a recent round of government aid to households and businesses, which boosted consumer spending early this year.

“Some consumers are dipping their toes back in,” said

In addition to restaurants, there were job gains at hotels, stores and in personal services, such as salons. “[Consumers] maybe not willing to fly off on an airplane, but appear more willing to dine in at a neighborhood restaurant.”

The job gains reinforce other signs of economic momentum. Household income growth surged in January and consumers boosted spending, according to separate Commerce Department reports, reflecting government-stimulus payments to individuals and enhanced unemployment benefits at the start of the year. Demand for manufactured goods is also rising and home sales are trending at 14-year highs.

Dr. Richardson said she expects hiring to accelerate further in the coming months, to more than a half-million jobs a month. “We’ll see a burst in hiring before things start to taper off again,” she said.

That marked a turnaround from January when the staff was reduced to a few workers amid operating restrictions and colder weather. Ms. DiStefano said indoor dining has been steady since it resumed in early February, particularly on colder days such as Valentine’s Day, when temperatures in New York were near freezing.

“The ability for people to get vaccinated is making people relieved,” she said.

The opening of service-sector jobs is aiding the employment prospects of some workers disproportionately affected during the pandemic. The unemployment rate for women, who are more likely to hold jobs at stores and restaurants, fell to 6.1% in February. Their rate is now below that of 6.3% for men.

The unemployment rate also declined for Latino and Asian workers. However, the rate increased for Black workers to 9.9%.

senior economist at job-rating site Glassdoor. “The elevated Black unemployment rate is a concern for the overall economy. Historically, we know Black workers tend to be the first fired and last hired.”

It took nearly a decade into the last economic recovery, which began in 2009, for Black workers to see the unemployment rate gap with white workers start to narrow.

Despite last month’s gains, the leisure and hospitality sector has 3.5 million fewer jobs than a year earlier, the Labor Department said, showing the recovery is far from complete. The Congressional Budget Office projects it will take until 2024 to fully recoup jobs lost during the pandemic.

Friday’s report showed job losses at all levels of government, though the Labor Department noted disrupted school calendars have changed usual hiring patterns. Employment in construction fell by 61,000 in February. Severe winter weather may have held down employment in that sector, the department said.

Doctor and dentist offices and other nonhospital healthcare providers added 36,000 jobs last month. The sector has mostly recovered the more than one million jobs it lost last spring, when nonessential health services were ordered to close. Employment at pharmacies and other personal-care stores, where many people are getting vaccinated, is recovering at a faster pace than overall retail.

Centerline Logistics, a Seattle company that provides fuel to ships in U.S. ports, is hiring to keep up with better-than-expected demand. Volumes at ports where Centerline operates picked up last fall as the demand for consumer goods rose ahead of the holidays, and that demand has continued this year, Chief Executive

“Ships are stacked up at the port as far as the eye can see,” he said.

The unemployment rate for those with a bachelor’s degree or higher slipped below 4% in February, showing that higher skilled workers continue to fare better in the pandemic economy.

“We’re desperately trying to hire because I don’t see it slowing down,” said

chief executive at Environmental Consulting & TechnologyInc. The Gainesville, Fla., firm, which works on renewable energy and other projects, has closed two offices, but added 10 workers, as its staff shifted to remote work.

The 215-person firm has 13 open positions it hopes to fill by April. Those roles, including environmental technicians and project managers, generally require college degrees.

Still, millions of workers who lost their jobs last year are struggling to find work, especially in their prior fields. More workers counted themselves as permanently unemployed, rather than on temporary layoff, in February, and the number of people out of work for six or more months increased for the 10th straight month.

How do you expect the job market to change this year? Join the conversation below.

Angela Moore, a 49-year-old actor and performer, said she applied for unemployment benefits nearly a year ago, after her gigs quickly dried up. The benefits help to pay for the mortgage and utilities at her northern Virginia home, but little else, she said. She went without air conditioning last summer because she couldn’t afford repairs.

She started a temporary job in September at a call center. That position ended in November, and Ms. Moore said her search for another job was delayed when she was diagnosed with Covid-19.

“It’s not that I don’t want to work,” she said. “But it’s just in terms of the opportunities, there are a lot less.”

What Happens When You Lose Your Job?

Write to Eric Morath at eric.morath@wsj.com