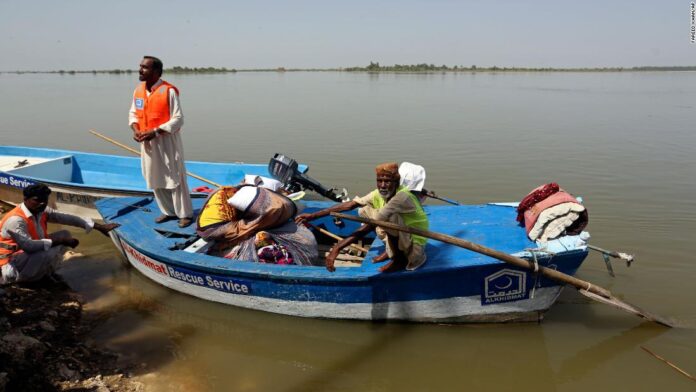 Water released from the lake flowed into the nearby districts of Jaffarabad and Bubak, with the aim of sparing more populated cities and towns across Sindh, including Sehwan, Dadu and Bhan Syedabad, from the worst of the flooding, according to Mangan.

Record monsoon rains that have lashed Pakistan and melting glaciers in the country’s northern mountains have affected 33 million people — or 15% of its population — according to government officials and aid organizations.
A third of Pakistan was left underwater after experiencing the heaviest rains on record, according to satellite images from the European Space Agency (ESA). Some areas — particularly the southern provinces of Sindh and Balochistan — have seen five times their normal levels of monsoonal rain.

The number of deaths since mid-June rose to 1,305 as of Sunday — with almost a third of the victims children — according to the country’s National Disaster Management Authority (NDMA).

Three million children are now in need of urgent humanitarian assistance across Pakistan due to the increased risk of waterborne diseases, drowning and malnutrition, UNICEF warned in a statement Wednesday.

Several international aid agencies were beginning to arrive in flood-ravaged Pakistan on Monday, delivering much needed food, clean water and medicines to victims of what the United Nations has called a “monsoon on steroids.”

‘This will not be over in two months’

Dr. Deedar Hussain from Pakistan’s health department said he feared of an outbreak of waterborne diseases if the flood waters do not recede fast enough.

Aurélie Godet, a press officer with Médecins du Monde, told CNN on Thursday the flood waters had washed away everything.

“Survivors must start from scratch. They need urgently dignified shelters, affordable food, access to health and to basic commodities. But this will not be over in two months, they need a long-term aid,” Godet said.

Godet said that children have been coming to their clinics with severe injuries on their feet because they have no shoes. And she said some people can’t afford their regular medicine because of price increases that are also making food too expensive, even outside the flood zone.

Pakistan’s Prime Minister Shehbaz Sharif said on August 30 the floods were “the worst in the country’s history” and estimated the calamity had caused more than $10 billion in damages to infrastructure, homes and farms.
According to charity Action Against Hunger, 27 million people in the country did not have access to enough food prior the floods, and now the risk of widespread hunger is even more imminent.