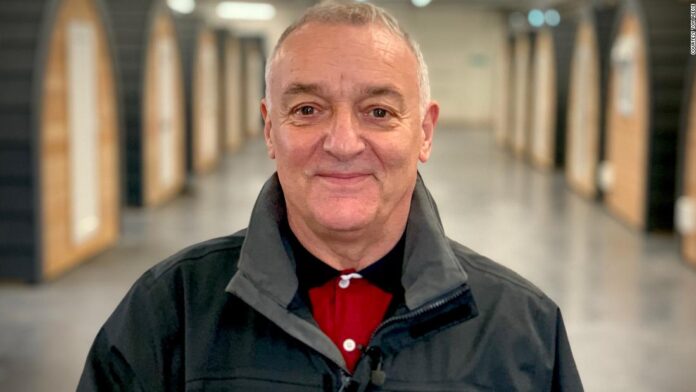 The Scot enjoyed a long and successful career in which he played over 400 times for the Red Devils and scored almost 100 goals. He won the coveted FA Cup a year before representing his country at the 1978 World Cup in Argentina.

Then followed nearly 20 years in management at various clubs across England as well as Celtic in his native Scotland where he’d begun his professional playing days.

Retirement could have meant putting his feet up and just taking it easy but Macari knew his work was not finished.

“I was simply reading a local paper, one night at home, and there was a bit of a dispute on about the number of homeless people in Stoke-on-Trent where I live,” the 71-year-old tells CNN Sport.

“I just thought I’ll get in my car, I’ll go to the town center, which I did do, and see for myself.

“It was a wet and windy night and quickly I found five or six in the doorway and across the road, I found another five or six and had a chat with them and asked them why they were out in the cold and the rain and would they go in somewhere.

“Would they enter into a building if I found them a building, would they go into it and go there instead and they all told me they would.”

According to homelessness charity Shelter, 280,000 people were homeless in England at the end of 2019, just before the pandemic took hold in the country.
Now, after months of lockdown and economic insecurity, it estimates more than six million people in England are concerned about losing their home.
READ: Emotional Zlatan Ibrahimovic reduced to tears on return to Sweden squad

Working in tandem with the local council, the original Macari Centre was born in 2016 with the former footballer’s sole goal to give a helping hand to society’s most vulnerable.

But then came the devastating global coronavirus pandemic and the urgent need to leave behind the cramped, dormitory-style accommodation and move quickly to secure a new and vastly improved site: the size, says Macari, of a football pitch.

“The biggest and best thing we’ve done is put TVs in the pods and radiators so they’re hot in there,” he says. “So they’re never cold, got the pods up to their liking and they’ve all taken a liking to them.

The “pods” — which are approximately 15 by 7 and a half feet in size — are the new Covid-secure individual accommodation units inside the shelter which is now home to almost 50 residents.

The pods, an idea originally inspired by a drive through the countryside, are ideal for if guests have to self-isolate. Along with a TV, each pod also has a new bed, a table, chair and a heater.

“The pods actually originate from farms in this country and they’re also in America, there’s something called glamping,” Macari explains.

“So I spoke to them on the field and some of the farms in Stoke-On-Trent and then [if] I could I go in and have a look at the pods. And as soon as I saw them from the other side, I liked them.”

Macari feels the pods can also have very practical benefits too.

“Homeless people have a habit of getting a bit uptight at times, punching something, breaking something. You can punch all you like in these. They’re wooden, they’ve got a front door as well.”

READ: Boycotting the 2022 FIFA World Cup in Qatar would be a ‘big mistake’

Inside the warehouse, guests are provided with clothing, meals and something else that’s essential in helping those trying to get back on their feet: their independence.

“They’ve all got their own numbered pods,” reveals Macari.

“So when they go to the job centre and they’re asked, where do you live? Instead of saying ‘I’m homeless,’ they give an address. They give a number of the pod they’re in and things happen a lot quicker because they’ve got addresses.”

There’s no question the pods have proved a big hit.

Nick, who lives at number 12, has added a coffee machine to his unit, something which is proving very popular with fellow residents.

“Tenfold,” he says when asked how much happier he is in the new center, adding “the difference between over there and over here is unbelievable.”

And he says he has nothing but gratitude for the efforts of Macari and his team even if getting some peace and quiet from the other residents is sometimes called for.

“What you’ve done for us here, I mean, I can actually shut the door and get rid of the rest of them!” he says.

Macari, whose deflected shot off Jimmy Greenhoff won United the FA Cup at the expense of arch rivals and treble-seeking Liverpool in 1977, says he’s been heartened by the way the football community has pitched in to help out, revealing the donated televisions were arranged through the League Managers’ Association and that there have also been clothing donations from Leicester city defender Jonny Evans.

Macari also maintains he has nothing but praise for current United star Rashford’s relentless efforts to end child food poverty, which even brought about a U-turn in UK Government policy last year.

“It’s good to see someone like Marcus coming forward and maybe he’s experiencing an upbringing when he was a child of not enough food and poverty and he made his voice be heard, and then even after that, when his voice had been heard, he wasn’t happy with what was the response from it,” observes Macari .

“He made his voice be heard again and his response for the second time has been good […] he’s made a big, big difference to young children’s lives in this country.

“I’m just hoping more and more footballers realize how fortunate they are to be in the spot they are in and being able to actually get government to take notice.

“So well done, Marcus, and well done any other soccer player, I should say, who comes forward and does something similar.”