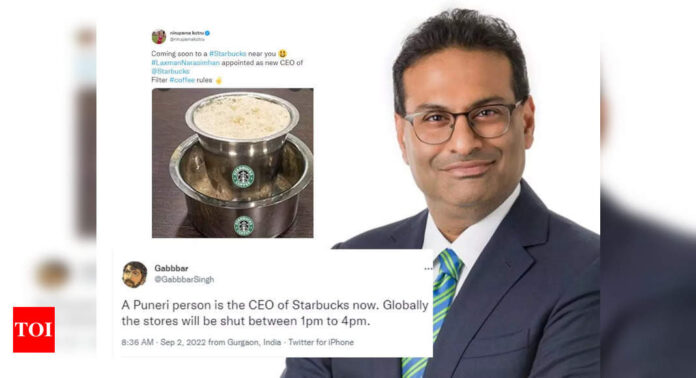 PUNE: Minutes into an interview in 2005, the suave and smart Laxman Narasimhan, then a partner at McKinsey, turned out to be a fun person who joked easily, followed everything from rock to Carnatic music, and shared that he would rather read anything else other than business books.
Mohit Gundecha, a student from College of Engineering Pune (CoEP) who interviewed Laxman for his college magazine then, had expected a formal and strict man who talked business, but saw another side of the next CEO of Starbucks.
Laxman is from Pune and studied at Loyola’s High School in Pashan, St Vincent’s High School and CoEP. From playing cricket with neighbourhood boys in Anand Park society in Aundh to a rewarding career, friends said he has come a long way. Laxman’s family moved to a house behind Hotel Conrad on Mangaldas Road after he finished Std X.
School friend and classmate Nitin Joshi said, “At heart, he is still the humble, warm and approachable guy we all grew up with.” They have a WhatsApp group of the 1982 batch from Loyola’s High School and despite his busy schedule, Laxman consistently posts photos and updates about his life, Joshi added.
“He is a big shot in the business world, but he is just a regular guy who does regular things with us. He goes to music concerts a lot and posts about them. A few days ago, he posted a photo with his mother and wife. He is always active in the group. A few days ago, he messaged that he won’t be posting anything for a while. This morning, we woke up to this amazing news and the group has been flooded with congratulatory messages,” Joshi, a businessman, said.
His friend recounted Laxman’s resilience and shared that his elder sister had passed away before he was born, and a few years later his elder brother too died. “He is very hard working and has travelled around the world for work,” Joshi added.
Murtuza Poonawalla, businessman and an alumni of the Vincents’ Old Boys’ Association, said that under the guidance of Father Oesch, Laxman started playing football and was the team’s goalkeeper when he attended the school for two years. He joined CoEP for mechanical engineering in 1984.
Gundecha, now the CEO of Jombay and board member of CoEP Alumni Association, who met Laxman again last year for an online interview for an alumni event, remembers an incident from 2005. His article said Laxman wrote extensively, read a lot, and took deep interest in art, apart from playing tennis while in college. “This, Laxman accepts, till date has helped make him the man he is,” Gundecha’s article added.
Mukul Sutaone, officiating director, CoEP Technological University, said Laxman has brought great honour to his alma mater and the institute is proud of his achievements. “He is a batchmate of Bajaj Auto MD Rajiv Bajaj,” Sutaone added.
In ‘Fireside Chat’, an online global meet organized by CoEP last, Laxman spoke about his life’s journey. He talked about his mother, a former primary school teacher at JN Petit Technical High School in Pune, as his biggest inspiration. He said he had to sell things and borrow money to arrange for his visa and studies at Wharton Business School, and how during summer school in Germany, he had money for just one meal a day and lost 10 pounds of weight, which taught him resilience.
Laxman said he learned Spanish on weekends while helming a company’s business in Latin America to give a speech to thousands of staff so that they would accept him. He also advised all those attending the meet, “Don’t forget where you came from.”