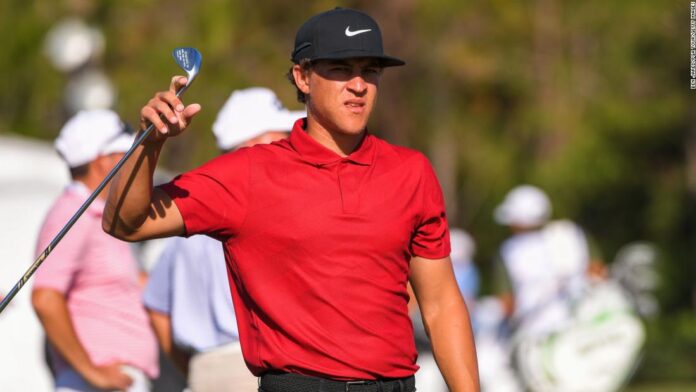 Woods responded on Twitter to the gesture made by many in the golf community, including Tommy Fleetwood, Justin Thomas and Cameron Champ, who wore Woods’ signature outfit.

“It is hard to explain how touching today was when I turned on the tv and saw all the red shirts,” Woods wrote Sunday. “To every golfer and every fan, you are truly helping me get through this tough time.”

Golfers at the Gainbridge LPGA on Sunday, including Annika Sorenstam, also wore red and black in support of Woods.
PGA Tour Communications tweeted a picture Sunday of maintenance staff at the Puerto Rico Open wearing red and black to honor Woods.
And golfer Bryson DeChambeau tweeted a picture of a golf ball with the name “Tiger” and a red line on it.

“We’re all pulling for you @tigerwoods,” DeChambeau wrote. “A mentor, idol and role model to my career, there’s no one that could come out of this stronger. We’re glad you’re here. See you soon.”

Woods suffered serious leg injuries in a single-vehicle rollover accident last week near Los Angeles, where his SUV crossed a median, went across two lanes of road, then hit a tree and landed on the driver’s side in the brush.
After initial treatment at Harbor-UCLA Medical Center, Woods was moved to Cedars-Sinai Medical Center in Los Angeles, where he received follow-up procedures, a tweet posted Friday to Woods’ Twitter account said. “The procedures were successful, and he is now recovering and in good spirits.”

Woods’ injuries included open fractures to his tibia and fibula that required a rod to be inserted, and additional injuries to the bones of the foot and ankle that were stabilized with screws and pins.