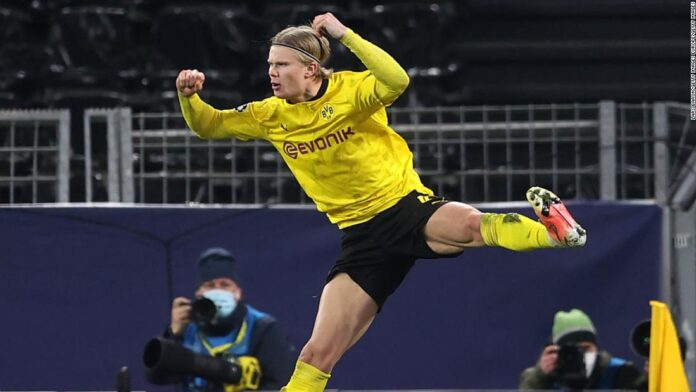 With yet another brace in Borussia Dortmund’s 2-2 draw with Sevilla in the Champions League on Tuesday, the young striker wrote a new page in the competition’s record books as the German side won 5-4 on aggregate to reach the quarterfinals.

No player in the tournament’s history has reached the landmark of 20 goals in fewer matches. Haaland has done it in just 14 games, beating the previous record held by Harry Kane who completed the feat in 24 matches.

The Norwegian international is also the youngster player ever to score in six consecutive Champions League fixtures and no one has scored more goals than him in the competition since his debut in 2019.

It’s a set of statistics that any player would be proud of, let alone a 20-year-old.

“Erling is outstanding. We are happy to have two more Champions League games now for him to keep scoring,” Dortmund coach Edin Terzic said after his side progressed into the quarterfinals.

READ: The making of Erling Haaland

Coming off the back of a disappointing defeat against rivals Bayern Munich on Sunday — a game in which Haaland scored twice — Dortmund looked determined to hold onto its first-leg 3-2 lead against Sevilla.

The German side extended its advantage in the first-half when Haaland tapped into the net after a cutback from captain Marco Reus.

The Norwegian striker then doubled his tally from the penalty spot after a controversial period of play.

Haaland thought he had scored a wonderful solo goal early after the restart but VAR disallowed his effort after spotting a foul committed by the striker. Incredibly, VAR then awarded Dortmund a penalty for an earlier foul against the youngster just minutes before.

The drama didn’t stop there.

Goalkeeper Yassine Bounou saved Haaland’s penalty attempt and followed up with a fine block from the rebound, but the referee ordered a retake of the spot-kick after VAR spotted the Sevilla keeper move off his line.

With his second attempt, Haaland hit an almost identical penalty which just about squirmed under Bounou’s outstretched hand.

Clearly riled up by the Bounou’s initial celebrations after saving his first attempt, Haaland goaded the keeper as he ran away in celebration with a number of Sevilla players angrily chasing the Norwegian.

The Spanish side did reply with two goals in the second half but it wasn’t enough as Dortmund won on aggregate.

With 10 goals already in this season’s competition, it remains to be seen how many more Halaand will add to his tally as he fires Dortmund deeper into the knockout stages.

Cristiano Ronaldo holds the record for the most goals in a Champions League season — he scored 17 during the 2013-2014 campaign.