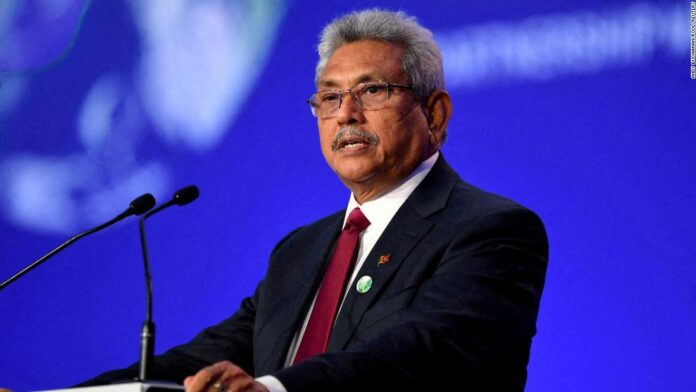 He is yet to explain why he traveled to three Asian countries in recent weeks amid economic and political turmoil at home — or why he decided to come back now.

Some activists are now demanding Rajapaksa face criminal charges, but with his allies remaining in power, analysts say any prosecution is unlikely. And it remains unclear if his return to the island nation of 22 million will stir further demonstrations.

After temporary stays in Maldives, Singapore and Thailand, Rajapaksa may have run out of countries willing to let him enter or stay, analysts said.

And according to a source cited by Reuters on August 23, the cost of maintaining his lifestyle overseas — including a private jet, presidential suite and security — had already mounted to hundreds of thousands of dollars.
Rajapaksa’s widespread unpopularity in Sri Lanka is a major reversal from the days when many in the country revered him as a “warrior-king” leader for defeating separatists in a decades-long civil war.

The ousted leader’s downfall “would have been a huge blow to his ego,” said Ambika Satkunanathan, a lawyer and former commissioner of the country’s Human Rights Commission.

“It was very difficult for him to find a permanent or semi-permanent place to stay. It proved more difficult than he imagined,” she said. “This was a politician who was once perceived as a demigod. He’s not used to being held accountable.”

Moving from country to country

His plane was initially refused permission to land until former Maldivian President Mohamed Nasheed — now speaker of the Maldivian Parliament — intervened, according to a high-ranking security official.

But Sri Lankans in Male were not happy — many took to the streets to protest his arrival.

“Throw him out here,” read one protesters’ placard. “Dear Maldivian friends, please urge your government not to safeguard criminals,” read another.

Less than 48 hours later, Rajapaksa left the archipelago on a Saudia flight for Singapore.

Singapore’s Foreign Ministry confirmed on July 14 that Rajapaksa was allowed entry to the island city-state on a “private visit.”

“He has not asked for asylum and neither has he been granted any asylum,” the Singapore Foreign Ministry said at the time.

It’s unclear why, though some analysts pointed to a possible reason in a heavily criticized 2020 Rajapaksa policy that required Muslim Covid-19 victims to be cremated.
The practice was “inconsistent with Islamic precepts,” according to a statement that December from the Organisation of Islamic Cooperation (OIC), of which Saudi Arabia is a member. The OIC expressed concern and called “for respect to the burial ritual in the Muslim faith.”

Rajapaksa subsequently reversed the policy, but implemented another controversial rule requiring Muslim victims to be buried at a remote government site, without their families and without conducting final religious rites.

He then found himself on the receiving end of a potential criminal investigation in the city state for alleged human rights abuses while he was defense chief during Sri Lanka’s 26-year civil war — allegations he denies.

According to a 2011 United Nations report, Sri Lankan government troops were responsible for abuses including the intentional shelling of civilians, summary executions, rape, and blocking food and medicine from reaching affected communities. The UN report said “a number of credible sources have estimated there could have been as many as 40,000 civilian deaths.”

A spokesperson for the Singapore attorney general’s office confirmed to CNN they received the ITJP’s complaint, but declined to comment further.

ITJP executive director Yasmin Sooka Sooka said filing a claim in Singapore was “incredibly symbolic” as it “demonstrated that once Gotabaya lost his immunity of office, he is an equal before the law.”

On August 11, Rajapaksa left Singapore for Thailand on a private jet.

His diplomatic passport entitled him to enter the country without a visa for up to 90 days, according to a spokesperson for Thailand’s Ministry of Foreign Affairs. The ousted leader’s stay was temporary and he was not seeking political asylum, the spokesperson added.

“The promise has been made that he will stay here temporarily. No visiting, no meeting and no movement whatsoever,” Prayut told reporters on August 10.

At home in Sri Lanka, pressure was building from the former leader’s supporters on new President Ranil Wickremesinghe — a Rajapaksa ally — to allow him to return safely.

On August 19, Rajapaksa’s brother Basil Rajapaksa, a former finance minister, requested protection to allow his return, according to a statement from the family’s Sri Lanka Podujana Peramuna political party (SLPP), which has an overwhelming majority in parliament.

“The main demand of the SLPP is the safety and security of the former president,” the statement said.

Sri Lanka took a step toward economic stabilization Thursday, reaching a provisional agreement with the International Monetary Fund (IMF) for a $2.9 billion loan.

The four-year program would aim to restore stability in a nation that has been plagued by crippling food, fuel and medicine shortages by boosting government revenue and rebuilding foreign reserves.

But with the IMF still yet to approve the loan, Sri Lanka faces a long road to economic recovery and analysts say it is unclear whether Rajapaksa’s arrival will inflame the situation in the country once again.

Since Wickremesinghe was sworn in on July 21, demonstrators have been forcibly removed from protest sites by police and some have been imprisoned for damaging public property, among other alleged offenses — moves condemned by rights groups and opposition politicians.

“There is definitely an element of fear,” said Satkunanathan, the human rights lawyer. “It’s hard to say if there will be further protests. But of course, cost of living remains high and inflation is escalating.”

And while millions in the country are unable to afford food or fuel, Rajapaksa’s comfortable lifestyle upon his return threatens to inflame the situation once again.

“That is what bring my people to the streets. They get so angry over this hypocrisy,” said Satkunanathan.

According to Sooka, from the ITJP, it is also “unlikely” that the former leader will be investigated over war crimes allegations.

“The political class will protect him, and despite him fleeing, the structures and loyalties he relied upon are still intact,” she said, adding the protest movement is “broken, scared, and fragmented from within.”

“There is always hope that an intrepid civil society group would petition the court to open a case against him and that the attorney general and police would support such an action,” she added.

“Impunity should not be tolerated. Dealing with Gota will show the world and Sri Lanka that nobody is above the law.”