Paneer has an ardent fan following across the country. From Paneer 65 to Paneer Lababdar, from Paneer Kheer to Paneer Tikka – the love for Paneer recipes supersedes regional boundaries. Soft blocks of cottage cheese are truly some of the easiest yet most versatile ingredients to work with. Apart from its unique adaptability and abundant availability, Paneer is also one of the most important sources of vegetarian protein. Paneer enthusiasts, rejoice – we have found a brand-new paneer recipe to add to your culinary repertoire. This yummy and delicious Paneer Jalfrezi makes for a lip-smacking treat which is truly out of this world.

Paneer Jalfrezi is one of the several British-Indian Jalfrezi curries, which dates back to as early as 19th century. Originally, the Jalfrezi was meant to be simply a way to use leftover meat and vegetables by frying it in chillies and oil. Historians and texts from the period suggest that the unique flavour of the Jalfrezi curries was much adulated by the Britishers, who then made it a part of their regular fare. Paneer Jalfrezi too is simply cottage cheese cubes cooked with a heavenly gravy and chopped vegetables. 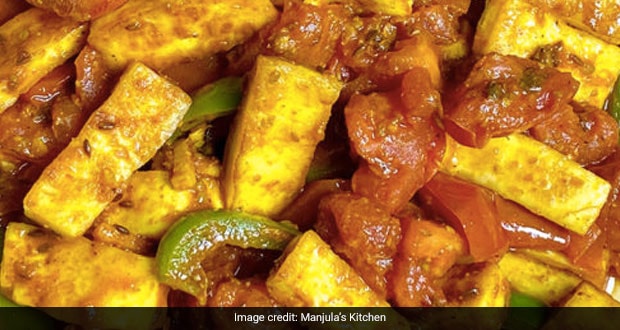 Paneer Jalfrezi is basically cottage cheese tossed in a light gravy with vegetables.

How To Make Paneer Jalfrezi At Home

There are two different ways to make the Paneer Jalfrezi at home – with the help of a gas stove or a microwave. Click here for the microwave-friendly Paneer Jalfrezi recipe. Begin by heating oil and cumin seeds in a pan. Let them sputter and then add a chopped onion. Once it begins to cook, add ginger-garlic paste, and mix it well to later add tomato puree. Now add the dry spices such as salt, turmeric powder, red chilli and coriander powder. You can also add green chillies to make the masala spicier. Proceed to add the diced onion, tomato and capsicum pieces along with cottage cheese cubes. Mix everything well and make sure the masala coats the ingredients well. Garnish with coriander leaves and serve fresh with roti or naan!

Click here for the full step-by-step recipe of Paneer Jalfrezi.