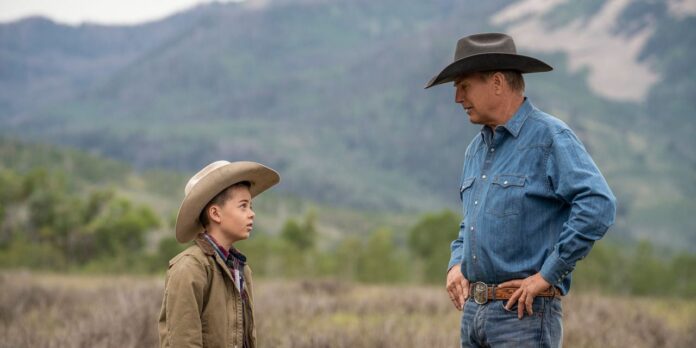 Stories with flinty-eyed protagonists set in wide-open spaces are gaining in popularity among audiences yearning for armchair travel and a break from computer-graphics and superhero films. Studios are spending hundreds of millions of dollars on several high-profile projects while lower-budget film productions take advantage of the cost efficiencies of shooting a Western.

The latest push into Westerns includes plans for dozens of new series and films, many shot on location, boosting business for horse wranglers and local economies.

plans to build on the success of a top-rated cable show, “Yellowstone,’’ which stars Kevin Costner.

platform has two cowboy-theme movies with the English actor Idris Elba, one of which, “The Harder They Fall,” was shot in New Mexico. Angelina Jolie stars in “Those Who Wish Me Dead” from

Warner Bros., a thriller set against the backdrop of the Montana wilderness, out in May.

The Golden Globes win for “Nomadland,” which features images of an empty Nevada desert and a lonely pilgrimage on roads through Western states, also evokes the genre. The film’s director, Chloé Zhao, recently announced she would make a futuristic vampire Western for

Crews trained in horse wrangling and cattle herding have seen work pick up. Veteran wrangler Stan Schultz, 66 years old, who worked on the Oscar winner “Dances With Wolves,” said his business with Hollywood tapered off in the 1990s, but added that “there’s a resurgence on the way” as states attract producers keen on making Westerns.

What new Western film or television series are you excited about? Join the conversation below.

Last fall Mr. Schultz and his son Nick hauled more than a dozen “movie horses” and a bundle of 19th-century replica saddles from South Dakota to the mountains near Livingston, Mont., to work on “The Last Son,” with Sam Worthington and Thomas Jane. The film is expected to be released later this year.

The revival has been gaining in momentum. Between 2010 and 2019, Hollywood released 49 films domestically classified as Westerns, modern Westerns (also known as neo-Westerns) or as sci-fi, fantasy Westerns, compared with 23 between 2000 and 2009, according to Comscore box-office analyst

ViacomCBS commissioned “Yellowstone” co-creator Taylor Sheridan to produce three additional Western-theme series exclusively for its streaming service: “Y: 1883,” a prequel to “Yellowstone”; “Land Man,” based on an oil town; and “6666,” the working title of a show that explores the history of a famous cattle ranch. He is also producing a series for the service called “Mayor of Kingstown,” set in Michigan. Los Angeles-based 101 Studios is producing the shows.

Mr. McCarthy of ViacomCBS calls the deal with Mr. Sheridan important to the future of its Paramount+ streaming service.

In total, ViacomCBS will pay Mr. Sheridan about $200 million to produce shows over multiple years, according to people familiar with the matter. Mr. Sheridan, a Texas cowboy who relocated to Hollywood in the 1990s, also produces a reality rodeo competition show for the company called “The Last Cowboy.”

A worker exiting a building taking shape at the Yellowstone Film Ranch.

For authenticity, Yellowstone Film Ranch interiors have a style of wallpaper that was available in the 1880s.

Applying the finishing touches at the Yellowstone Film Ranch.

Some of Hollywood’s biggest names are participating in the Western’s revival. The director Quentin Tarantino leaned into the genre in his latest films, including “Once Upon a Time…in Hollywood,” while Tom Hanks starred in the recently released “News of the World.”

’s Star Wars spinoff “The Mandalorian,” a hit streaming series, plays like a homage to the director Sergio Leone’s Spaghetti Westerns of the 1960s, including “The Good, the Bad and the Ugly,” which stars Clint Eastwood.

“The Western myth of rugged individualism…has regained an odd popularity in 2020 during the pandemic,” said the author and screenwriter Larry McMurtry. The Texas author won the Pulitzer Prize for “Lonesome Dove,” a Western opus made into a CBS miniseries.

Mr. McMurtry, who shared a screenwriting Oscar with Diana Ossana for “Brokeback Mountain,” said he is thinking about writing a Western television series with her.

Entrepreneurs and rural economies in states including New Mexico, Utah, Colorado and Montana stand to benefit.

Around the time the Schultzes rolled into Montana last October, the land developer Carter Boehm was putting the finishing touches on an authentic Wild West boomtown and permanent film and TV set he and his partners built in the Livingston area.

Mr. Boehm said he is investing $10 million in the 26-building set, christened the Yellowstone Film Ranch, which will eventually include a train station and locomotive. To create a production lot as authentic as possible, his construction crew installed a style of wallpaper that was available in the 1880s.

After watching many recent films set in Montana but filmed elsewhere, Mr. Boehm said he lobbied for years for the tax film credit Montana enacted in 2019. Now, with his town more or less finished, he has three Westerns slated to shoot at the ranch later this year, beginning with a film he is producing titled “Murder at Emigrant Gulch.”

The Montana tax incentive helped persuade the producers of “Yellowstone” to shoot the fourth season there, according to a person familiar with the matter. Previously the show was filmed mostly in Utah. The show doesn’t film at Mr. Boehm’s ranch.

The rise in Western-style productions has also buoyed local businesses.

The cast and crew of Mr. Tarantino’s “The Hateful Eight” purchased more than $100,000 of snow tires from a supplier in Telluride, according to the Colorado film commissioner,

When productions come to a town, “all the restaurants are busy, the hotels are full, and they frequently come during the offseason,” said Mr. Zuckerman.

New Mexico’s film commission said Western-theme content has generated more than $1 billion in economic activity since 2000, due in large part to the state becoming an important production hub for Hollywood, particularly Netflix, which owns a studio in Albuquerque.

Netflix recently announced it planned to invest another $1 billion in New Mexico on top of the initial $1 billion the company said in 2018 it planned to spend over a decade. The increased investment will include adding 300 acres to its existing production facilities.