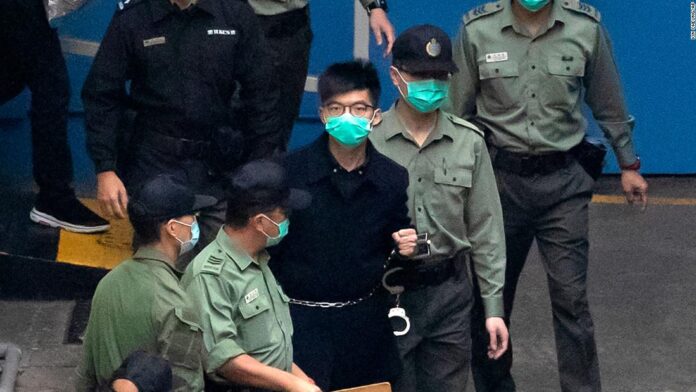 The 15 defendants included ex-lawmakers Kwok Ka-ki, Jeremy Tam and Helena Wong, chief magistrate Victor So said. All the remaining 32 defendants, including former law professor Benny Tai and activist Joshua Wong, have been remanded in custody until the next hearing on May 31.

The 47 defendants were charged on Sunday with subversion under the new national security law, which Beijing enacted unilaterally last summer. The case marks a sweeping escalation in the application of the law, which Hong Kong leader Carrie Lam had previously said would be limited in effect and only target a small number of fringe activists.

However, prosecutors immediately appealed the bail decisions, forcing the magistrate also to remand the 15 defendants in custody until an appeal hearing is made at the High Court within 48 hours.

In granting bail, chief magistrate Victor So said the defendants must not publish any speeches or commit any acts on any platforms that may reasonably be deemed as endangering national security. The 15 defendants are also not allowed to take part in any elections, with the exception of voting.

The defendants must not directly or indirectly contact any foreign officials or lawmakers, and must surrender all travel documents and obey a curfew order.

After the decision was announced, some of the defendants chanted “Hong Kong people, we are not dead yet” and “political prisoners are not guilty,” and thanked lawyers for their support.

According to Hong Kong laws, reporters are not permitted to disclose details of individual bail submissions. The magistrate has declined a request to grant an exemption in the hearing.

The prosecution has postponed the next hearing to May 31, after prosecutors said police would need more time to investigate the defendants’ mobile devices and financial records.

The bail decisions came after prosecutors and defense spent four full days debating whether each of the defendants should be granted bail.

Since Monday, supporters of the pro-democracy movement — mostly wearing black — have queued up outside the West Kowloon court and filled the public gallery. As the decision was announced on Thursday night, dozens of police officers were seen on standby outside the court building.

Hong Kong’s common law system traditionally requires prosecutors to convince the court why a judge should not grant bail. However, the national security law stipulates that defendants cannot be granted bail unless the court is convinced they will “not continue to commit acts endangering national security.”

Representatives from foreign missions were present to monitor the proceedings. Joakim Ladeborn, deputy consul of the Swedish embassy in Hong Kong, told CNN on Tuesday that the EU was concerned with how the national security law has been implemented in Hong Kong. “We are following the cases concerning the national security law very closely,” he said.

Authorities chose to conduct all bail hearings simultaneously, which turned what is normally a routine legal proceeding into a series of grueling, lengthy court sessions.

At least six defendants have been hospitalized amid the marathon hearings, the court heard.

The 47 pro-democracy politicians are accused of a conspiracy to commit subversion over an election primary last July, marking the biggest application of the national security law since it was imposed last year. The offense carries a maximum penalty of life imprisonment.

Prosecutors had requested that the judge deny bail for all 47 defendants and give the government another three months to investigate, which at least one defense attorney called a “major injustice.”

Prosecutors argued the defendants, which include prominent activist Joshua Wong and law professor Benny Tai, were involved in a “massive and well-organized scheme to subvert the Hong Kong government” by planning and participating in an unofficial primary election last July. Such contests are a normal function in democracies around the world, during which political parties select the strongest candidates for an election.

However, police claimed the scheme fell afoul of the new national security law. The law criminalizes secession, subversion, terrorism, and collusion with foreign powers, and carries with it a maximum sentence of life in prison. Cases under the sweeping legislation are handled by a dedicated branch of the Hong Kong police and judges assigned to hear national security cases.

The legislative elections were supposed to be held in September, but were eventually postponed due to the coronavirus pandemic. Critics accused the government of using a public health emergency to stave off a political disaster, as the incumbent pro-Beijing parties appeared headed for historic losses.

The trial of the 47 political activists has been met with strong opposition in Hong Kong and throughout Western democracies like the United Kingdom and the United States.

Hundreds of protesters risked arrest to demonstrate in Hong Kong when proceedings started Monday. The protest was the largest seen in the city for months, with those gathered chanting the banned slogan, “Liberate Hong Kong! Revolution of our time!” and carrying placards demanding the release of those rounded up under the legislation.

China says that it was necessary to enact the national security legislation after the government’s attempt to introduce an unpopular extradition bill sparked massive, sometimes violent pro-democracy protests in Hong Kong almost two years ago.

Hong Kong’s local government and authorities in Beijing argue the charges against the 47 activists are a matter of national security and have warned foreign parties against interfering in China’s domestic and judicial affairs.