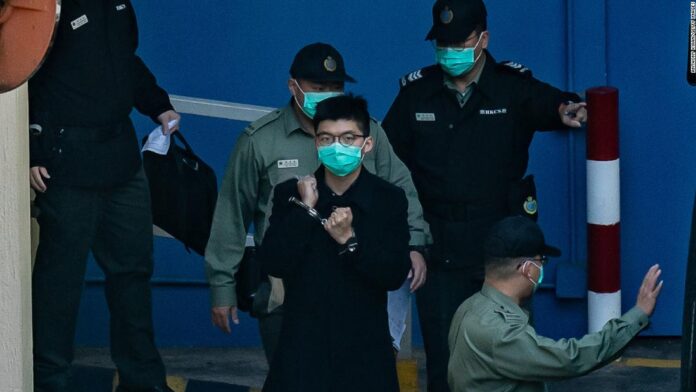 Wong was already in prison, serving a 13.5-month sentence for his role in demonstrations during the 2019 pro-democracy protest movement. On Thursday, a post published on Wong’s verified Facebook page said he had been transferred from prison to a detention center, where police officers questioned him.

An assistant who has been managing Wong’s social media accounts confirmed his arrest to CNN.

The post alleged that Wong’s lawyer had not been able to reach him when police took statements. CNN has reached out to the Hong Kong police for comment.

The arrest of Wong is the latest to have occurred under the auspices of Beijing’s new national security law, which on Wednesday saw police arrest 53 in dawn raids on democracy activists across the city.

The law criminalizes acts of secession, subversion, terrorism, and collusion with foreign forces, and carries with it a maximum sentence of life imprisonment. Such vague parameters have provided authorities with sweeping powers to crackdown on government opponents as Beijing continues to tighten its control over the semi-autonomous city.

Hong Kong officials had previously promised that the law would be limited in effect, and only target a small number of fringe activists. However, critics allege that since its introduction, the law has been used to forcefully stamp out the city’s formerly vibrant pro-democracy movement.

A total of 53 people were arrested Wednesday for the crime of “subverting state power,” according to police. Among them, six were arrested for organizing and planning an informal primary election last July ahead of the city’s Legislative Council elections, while the remaining 47 were arrested owing to their participation in the event.

Primary elections are a normal function in democracies around the world. At the time of the Hong Kong vote, the United States Democratic primary, which President-elect Joe Biden won, was still ongoing.

Hong Kong pro-democracy activists have held such votes in the past, in an attempt to match the organization and discipline of the rival pro-Beijing camp and avoid splintering support.

The city’s secretary for security, John Lee, said on Wednesday that the primary election organizers were seeking to “paralyze the Hong Kong government” by winning a majority in the legislature.

The legislative elections were eventually postponed due to the coronavirus pandemic, but not before multiple candidates were disqualified and warnings made that those participating in the primary could be in breach of the security law.

Of the 53 arrested on Wednesday, 52 are now on bail, but are required to surrender travel documents and report to police again in early February, police told CNN.

The remaining activist, former pro-democracy lawmaker Wu Chi-wai, was taken to court on Thursday after police said he had failed to hand over all travel documents when applying for bail in a previous case.

Lester Shum, a district councilor who was among those released on bail, called the mass arrest “ridiculous.”

Also among those arrested was American lawyer John Clancey, who was released on bail without charge. An associate at a Hong Kong law firm, Clancey also served as the treasurer of Power for Democracy, a Hong Kong pro-democracy group that co-organized the election primary.

His US passport was confiscated by police, he told CNN on Thursday. His firm, HO TSE WAI & Partners, was also raided by police on Thursday, according to its partner. Clancey is the first foreign citizen without a Hong Kong passport to be arrested under the national security law.

The mass arrests were met with strong condemnation from several countries. US Secretary of State Mike Pompeo announced that the US would consider sanctions in response to the arrests, specifically pointing to Clancey’s arrest. “I am also appalled by the news of the arrest of an American citizen as part of this campaign of political repression,” he said in a statement. “The United States supports the Hong Kong people and all who yearn for freedom.”

Other governments also expressed criticism and concern over the arrests, including the United Kingdom, the European Union, and Taiwan.

“The National Security Law is being used to crush dissent and stifle the exercise of human rights and political freedoms that are protected by Hong Kong’s basic law, as well as by international law and China’s international obligations and commitments,” said European Commission spokesman Peter Stano on Wednesday, adding that the EU called for the “immediate release” of those arrested.