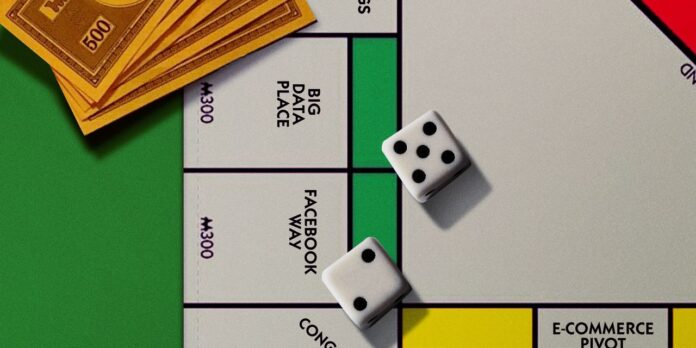 When the pandemic upended the economy last year, companies took a hard look at their advertising plans.

shifted money meant for TV commercials during March Madness basketball and the Summer Olympics into digital platforms. A hefty chunk went to

Google, which offered data on what locked-down snack lovers were searching for.

Athleisure company Vuori Inc. more than tripled its spending on

spotting a chance to juice sales of its sweatpants to people stuck at home. Office-furniture maker

The Big Three of digital advertising—Google, Facebook and Amazon—already dominated that sector going into 2020. The pandemic pushed them into command of the entire advertising economy. According to a provisional analysis by ad agency GroupM, the three tech titans for the first time collected the majority of all ad spending in the U.S. last year.

Beneath the shift are changes driven by the pandemic: more time spent on computer screens; more e-commerce; a jump in new-business formation, and a steady improvement in tech giants’ ability to demonstrate a return on ad investment.

Success breeds success for what some call the “triopoly.” The increase in shopping and spending on Google, Facebook and Amazon’s platforms is adding to their already voluminous data on users, giving them even more appeal for advertisers that look to target their messages.

“These companies that are data-science-driven get stronger and faster with a tailwind of usage—and Covid was a hurricane,” said ad-industry veteran

Many of the pandemic-driven changes likely are here to stay, say advertisers and ad forecasters. Still, when the pandemic winds down, it’s far from certain the tech giants will continue to increase their market share gains at this rate. With the vaccine rollout and easing of lockdowns, consumers could spend less time and money online and marketers could diversify their spending.

The growth in online advertising last year came as every other kind of ad spending shrank, with double-digit declines in television, newspapers and billboards, according to GroupM. And those online gains flowed heavily to the tech giants rather than to digital media sites and publishers that sell online ads.

The triopoly increased their share of the U.S. digital-ad market from 80% in 2019 to a range approaching 90% in 2020, GroupM estimates. It’s a surge that comes as the three face scrutiny and litigation from various agencies at home and abroad over their dominance.

Google, in announcing plans to tweak its tools that help publishers and advertisers buy and sell ads, is moving away from targeting ads based on individuals’ browsing activity across the web. But that shift might wind up further strengthening Google’s grip on the online-ad industry, some experts and rivals say, because it could boost the value of the data flowing through Google properties such as Search and YouTube.

Amazon this week said it will begin streaming Thursday Night Football by 2023, giving the company a high-profile franchise to take in ad dollars normally spent on TV broadcasters.

The three giants aren’t collecting just the money spent to advertise in the media but also some of the marketing dollars earmarked for coupons, catalogs and in-store promotions.

New-business applications in the U.S., which slowly climbed from 200,000 a month to 300,000 over a decade, shot up north of 500,000 in July and averaged more than 400,000 a month for the second half of 2020, according to the U.S. Census data. This proved a boon for the biggest tech platforms, which provide the kind of advertising that is often all a startup can afford. Facebook says it had more than 10 million active advertisers in the third quarter, up from 8 million in January.

Meanwhile, many businesses of all sizes pivoted to e-commerce selling—and turned to digital ads to support that effort.

Before the pandemic, a little more than 10% of retail purchases in the U.S.took place online. That jumped to 16% in last year’s second quarter when lockdowns peaked, according to Census data. Though the rate tapered a bit as the year wore on, the trend strongly benefits the tech behemoths.

“The pandemic zapped us two years into the future on the e-commerce side,” said

Mondelez, the Chicago-based maker of Oreo, Ritz and other snacks, in 2020 geared up to promote some of its brands in the marquee television events of the NCAA college basketball tournament and the Summer Olympic Games in Tokyo. When it became clear neither would be held, Mondelez redeployed the money to digital advertising.

It doubled down on Google ads to capitalize on interest in online recipes among those homebound. It used Facebook-owned Instagram to host a Pictionary-like game in which an artist made images out of the cream in the middle of an Oreo cookie. For the first time, Mondelez spent more on digital ads than on TV commercials last year. Google and Facebook were the biggest beneficiaries.

This year, digital advertising is projected to account for more than half the roughly $1.1 billion Mondelez spends on media world-wide. It was only about 30% as recently as 2017. TV’s share of the company’s ad spending continues to decline.

When Mondelez invests in digital advertising, it gets a 25% better return than with TV ads, the company says. It has found that its Google and Facebook ads do especially well, generating 40% higher returns than an average digital ad. The two now account for roughly 60% to 70% of Mondelez’s digital ad spending, up from less than 50% in 2017, the company says.

Google data showed Mondelez, for instance, that people tend to search the internet for healthier snacks in the morning and for more-indulgent treats as the day wears on.

When the pandemic struck, Google provided updated data that helped Mondelez craft relevant ads. The company switched from showing college-age consumers an ad about eating lunch in the library to one that read: “Made it through an online class? Treat yourself.”

Mondelez has been working with Google and

to figure out how likely someone is to buy Oreos or Ritz crackers from Target stores after being served ads for them on Google’s YouTube.

“I can’t go to CNN or other platforms and be able to get that intelligence,” said

Mondelez’s global vice president of consumer experience. Big advertisers like Mondelez still spend a lot on TV commercials, and most consider TV the best way to reach a mass audience, rather than any particular segment of consumers.

As it directs more ad money to the tech giants, Mondelez isn’t working with as many digital publishers in the U.S. In 2017, Mondelez worked with about 150; it now works with fewer than 10.

For direct-to-consumer businesses, the pandemic provided an opportunity like no other.

Activewear company Vuori distributes through stores, but its main focus is selling via catalogs and the web. Facebook is a key part of its strategy. Besides enabling Vuori to monitor the performance of its ads, the platform’s tools let Vuori upload lists of its customers and then use Facebook’s algorithm to find look-alike audiences, testing and pivoting in real time.

When the pandemic arrived, Vuori CEO

noticed something interesting in the data: The prices of Facebook’s ads were dropping at the same time as people were clicking at higher rates on Vuori ads for items like its $80 sweatpants. That combination sent its return on ad spending through the roof.

Vuori stopped traditional marketing such as catalogs and direct mail and shoveled every dollar it could into Facebook. It doubled its April 2020 media spending from what was budgeted, and saw sales quadruple. Facebook’s ad prices have since recovered, and Vuori has diversified its ad spending somewhat, but it has continued to increase its use of Facebook ads.

A surfer and yoga practitioner, Mr. Kudla seeks to create products for people with the kind of active lifestyle he and his friends in Encinitas, Calif., have. But for finding customers, he says, Facebook beats his instincts.

“We could identify the age, demo and behavior, but ultimately the algorithm is much more powerful in terms of identifying people who demonstrate certain shopping behaviors,” Mr. Kudla said.

Performance-obsessed small advertisers such as Vuori are the reason Facebook revenue never stopped growing last year, despite the pandemic’s hit to the economy and then a summer boycott by some prominent advertisers over the platform’s handling of hate speech and misinformation.

In the three years leading up to the pandemic,

founder of the toilet spray company Poo-Pourri, was focused mainly on building out the network of retail stores that carried what it calls a “before-you-go” spritz of essential oils.

Then Covid-19 hit, and one distributor refused to take a multimillion-dollar order already produced. “That was pretty painful,” Ms. Batiz said. “But as one of my mentors would say, crisis precedes transformation.” The company shifted focus from driving customers to stores to driving them to its e-commerce site and others’ shopping sites.

That meant cutting all marketing spending that wasn’t digital, such as payment for promotions at

stores or for events, while stores were closed. Ms. Batiz redirected the money to the web, especially Facebook. Sales on Poo-Pourri’s website surged 300% in the second quarter versus a year earlier and more than doubled for the year.

Steelcase, which makes desks and other office furniture, spent roughly $1 million on advertising in 2019, primarily for print and digital ads in business publications to target facility managers, architects, developers and company executives. Most of its revenue came in direct sales to corporations or from its dealer network, which has showrooms around the country. Its business of direct selling to consumers was minuscule.

As states’ stay-home orders spurred an exodus from offices last spring, Steelcase’s sales plunged. The Grand Rapids, Mich., company ramped up its small direct-to-consumer business, increasing its staff for that to 25 people from two.

How much influence do ads you see on Google, Facebook or Amazon have on you? Join the conversation below.

It stopped advertising in business publications and began buying search and social-media ads. Steelcase radically increased its ad budget last year and spent $5 million to $6 million on digital ads targeting people setting up home offices. About half of that went to Amazon search ads.

“Everyone focused on Amazon, whether you needed toilet paper, spices, a Cuisinart mixer or an office chair,” said

the furniture maker’s vice president of global marketing. “We decided to shift there as well, and it paid off.”

For every dollar Steelcase spent on Amazon ads during the holiday season, it made $30 in sales, the company says. Sales for its business aimed at consumers are up 500%.

Steelcase plans to double its Amazon spending this year. Its research indicates the pandemic has changed work life for good, predicting that about 72% of businesses are likely to take a hybrid approach of working from both home and office. “The hybrid future is here to stay,” Mr. Smith said.

Write to Keach Hagey at keach.hagey@wsj.com and Suzanne Vranica at suzanne.vranica@wsj.com