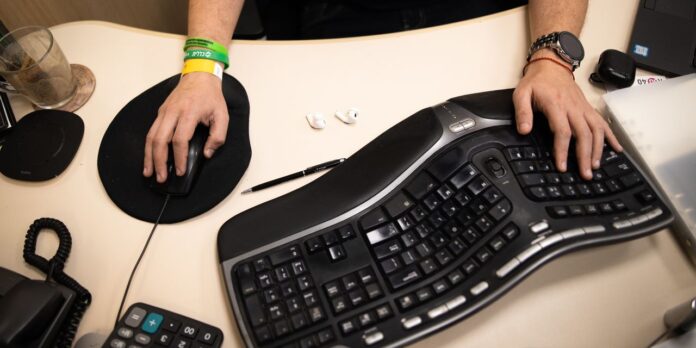 Without one of the green vaccination bracelets, explained security manager Rotem Kremer, other employees wouldn’t know whether the software developer had been inoculated against Covid-19, which has killed over 5,800 in Israel and shut down the country’s economy three times. Mr. Kremer asked the developer, Michael Elbaz, to pick up his meal of sausages, rice and sweet potatoes and eat alone at his desk.

“This is a part of my job now,” declared the 34-year-old Mr. Kremer, dressed in office-casual green slacks and blue checkered shirt.

As Israel’s economy opens on the back of its aggressive vaccination drive, the country’s corporate sector has become a global test case for how business owners bring staff back to the office. That transition has involved an assortment of sticks and carrots to accelerate employee vaccinations, despite opposition from labor and privacy advocates over the potential for mandatory inoculations.

Government regulations require everybody throughout Israel, whether they are vaccinated or not, to wear masks in public spaces, indoors and outdoors alike, including in workplaces.

When it comes to combating the highly transmissible and deadly disease in the workplace, some Israeli executives say now is the time to explore novel strategies.

“Israeli industry can be a model for all other countries and demonstrate how to sustain economic activity alongside Covid-19,” said Ron Tomer, president of the Manufacturers Association of Israel, which has worked closely with the government on policy during the pandemic.

In late February, Israel began issuing so-called “green passports” that indicate the bearer has been vaccinated, and are required to enter gyms, concerts, hotels and even political rallies. The passes are also to be used at restaurants and bars as they reopen in the coming weeks. The tiny Mediterranean nation’s uniform, highly structured approach to reopening stands in contrast to the U.S.’s patchwork of policies that have some states like Texas and Mississippi dropping mask-wearing mandates and occupancy limits for businesses while others keep them in place.

and agreed to share data about its effectiveness and side effects. It also placed orders with other vaccine companies, including

Despite pockets of resistance, the majority of working-age Israelis have had at least one shot, with the trend showing most will have had a second dose in the coming weeks, Israeli health ministry data show. Around 90% of Israelis aged 50 and above have been fully vaccinated, say health officials, as part of an inoculation drive that has dramatically reduced death rates and allowed the country of 9.3 million to reopen its economy and schools.

As of Thursday, according to the Israeli health ministry, the rolling seven-day average for new Covid-19 cases was 3,715, down from a peak in February of 7,838. Cases of severe illness from the virus also fell to 740 as of Thursday, from a February high of 1,144.

That doesn’t mean everyone is returning to the office.

In February, Israeli venture-capital fund OurCrowd, which surveyed more than 100 of its portfolio companies, published research that found just 14% plan to have all employees return full time to the workplace by July. Meanwhile, 86% said they’d continue a hybrid model combining visits to the office with remote work locations.

Israel’s companies are experimenting with how to bring vaccinated employees back. Big Shopping Centers, which operates 26 malls throughout Israel, said by mid-March no unvaccinated person could enter its management offices in Herzliya. Paramedics set up vaccination sites at

factories and offices to increase access to the shot. Meitav Dash Investments Ltd., one of Israel’s largest investment firms, offered 500 shekels, equivalent to $150, to employees who got the shot.

While Israeli companies have forged their own path toward a fully vaccinated workforce, U.S.-centered multinationals with large footprints in Israel have taken a more cautious approach.

A representative for Facebook Inc. said the company will allow a small portion of workers in Israel to return to the office starting March 15, but could adjust its policy if the health situation changes.

Facebook’s pilot program, which was a local decision and allows unvaccinated employees to come to offices too, is intended to help staff who are having a difficult time working from home.

said they were still monitoring for directives from the government before changing their workplace policies.

Check Point is relying on local managers to drive vaccination policy at the company’s offices located in over 60 countries and several states within the U.S., according to Yiftah Yoffe, the Tel Aviv-based company’s vice president for human resources. In Israel, said Mr. Yoffe, the executives are confident they won’t break cultural taboos by asking about employees’ vaccination status and then telegraphing it via the bracelets, an approach that could spark ire among Americans.

“If we are off by a few degrees, we trust the employees to correct us on the spot,” Mr. Yoffe said.

Check Point employees who are fully vaccinated, with the green bracelets to prove it, are allowed to enter a company salon, rooms, gym, sprawling outdoor balconies and manicure and pedicure room, which reopened over the past few weeks after being closed since last spring. Non-vaccinated employees’ keycards will only get them into their offices.

While over 2,000 employees used to work at Check Point’s Tel Aviv headquarters daily, only several hundred are coming back into the office for now—some of whom have green bracelets and some who don’t. A video plays in elevators reminding the green-bracelet crowd of the amenities available to them. Those without are reminded that they must eat in their offices rather than in company dining facilities.

Check Point says its one-of-a-kind green-bracelet program is an interim measure. By next month, it plans to bar non-vaccinated employees from its headquarters, unless they bring a fresh negative Covid-19 test for each visit.

When Check Point unveiled its program last month, more than a quarter of its employees coming into the office weren’t vaccinated. By Wednesday, that rate had fallen to 6%. Employees said in interviews the program made them feel safe.

The trend to inoculate all employees in an office, or go “100% green” as the Israeli companies say, is gaining momentum.

In an email sent to employees, Mobileye Chief Executive

explained that an internal survey found that 90% of the Jerusalem-based smartcar company’s 1,800 employees were fully or partially vaccinated. Just 10% of employees say they won’t get vaccinated, according to the survey.

The Israeli government is supporting the corporate-vaccination drive in part by allowing paramedic teams from Magen David Adom, Israel’s Red Cross, to set up vaccination sites near or inside companies.

Paramedics rolled up to the factory of SodaStream International Ltd. after the carbonated-drink maker struggled to meet increased demand for its products during the pandemic. Coronavirus regulations—such as forcing entire teams of workers to quarantine if one tests positive for the virus—had upended work shifts and reduced productivity.

The majority of SodaStream’s factory workers also come from one of Israel’s least-vaccinated groups, the Negev Desert Beduoin, an ethnic-Arab minority living in an area where access to healthcare and trust in the vaccine is lower than the rest of the country.

Paramedics vaccinated 80% of the SodaStream staff in a single day, a spokesperson for the company said, with a second round already scheduled for three weeks later. A significant financial incentive accompanied the drive: SodaStream offered a 300-shekel ($90) voucher and T-shirt to anyone getting vaccinated.

In its quest to vaccinate its workforce, Israel announced it will soon begin inoculating over 100,000 Palestinian laborers who have permits to work within Israel’s internationally recognized borders and in Jewish settlements in the West Bank. To do so, it will set up vaccination sites at major land crossings and industrial zones. Israel has been criticized for not extending its vaccination program to Palestinians under its control. Israel has argued that responsibility belongs to the Palestinian health ministry, which is working independently to secure vaccines for Palestinians.

While tech companies are allowing more employees to work from home—and manufacturing companies aren’t yet banning unvaccinated employees from the workplace—the service and retail industry is adopting a tougher approach toward those resisting vaccines.

Shachar Turjeman, chairman of the Association of Fashion, Commerce and Restaurants Chains, said he recommends employers fire or furlough those who refuse to get the shot. Alternatively, he says, the unvaccinated can bring a negative Covid-19 test every 72 hours.

Mr. Turjeman, who is also chairman of the retail company Brill Group, which runs hundreds of fashion stores in Israel, told his franchisees that anyone not willing to be vaccinated would be required to hand over the keys to his or her store. Three holdouts got inoculated, he said.

“I want to protect my customers and employees,” Mr. Turjeman said.

What kind of incentives would encourage you to get inoculated against Covid-19? Join the conversation below.

Some privacy- and workers-rights advocates say that demanding to know someone’s vaccination status violates his or her right to privacy, and possibly the freedom to work by preventing the person from finding a job.

The Association for Civil Rights in Israel says it received 30 to 40 complaints on its hotline from workers around the country who claimed their employers demanded to know whether they were vaccinated. The association asked Israel’s attorney general last week to clarify whether employers could require workers to disclose their vaccination status. The deputy attorney general said the issue would likely be clarified once legislation is passed outlining what authority employers have over vaccination policy at the workplace.

The civil-rights association’s website said it supports efforts to encourage Covid immunization, but that such campaigns should rely on “incentives that do not unduly infringe on the constitutional right to privacy, the right to freedom, the right to equality and other such basic human rights.”

No matter how amenable employees are, complicated encounters over vaccination status are likely to endure.

The employee who was asked to leave the company’s dining area, Mr. Elbaz, argued he wasn’t a health threat because he’d recently recovered from the virus. The 28-year-old software developer who lacked a green bracelet used his phone to download a certificate of recovery from Israel’s health ministry. Mr. Kremer, the company security manager, let him stay.