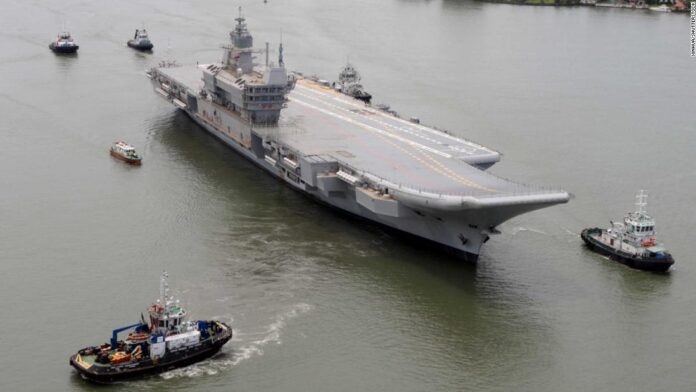 With the $3 billion Vikrant, India will join only a small number of nations with more than one aircraft carrier or helicopter carrier in service and become only the third country, after the UK and China, to have commissioned a domestically built aircraft carrier in the past three years.

The carrier has filled the nation with “new confidence,” Prime Minister Narendra Modi said at a ceremony marked by fanfare at the Cochin Shipyard in India’s southern Kerala state.

“The goal may be difficult. The challenges may be big. But when India makes up its mind, no goal is impossible,” Modi said, before boarding the carrier and unfurling the country’s new naval flag.

“Till now, this type of aircraft carrier was made only by developed countries. Today, India by entering this league has taken one more step towards becoming a developed nation,” Modi said, adding the Indo-Pacific region remained “a major security priority” for India.

John Bradford, senior fellow at the S. Rajaratnam School of International Studies in Singapore, said India’s commitment to the ship reflected its “long-term vision to maintaining a world-class naval force.”

“There are looming questions about the survivability of any carrier in the missile age, but major navies — including those of the US, Japan, China and the UK — are doubling down on their carrier investments. In this sense India is keeping in the race,” Bradford said.

With a displacement of around 40,000 tons, the Vikrant is slightly smaller than the Vikramaditya and the carriers of the US, China and UK though it is larger than Japan’s.

But analysts praised its potential firepower.

When its air wing becomes fully operational over the next few years, Vikrant will carry up to 30 aircraft, including MiG-29K fighter jets — to be launched from its ski-ramp style deck — and helicopters as well as defensive systems including surface-to-air missiles.

“India is sending out the message that it has the power, it has the aircraft carriers and therefore the air power to dominate the distant reaches of the Indian Ocean,” said Ajai Shukla, a former Indian military officer turned defense analyst.

Analysts said the new carrier, and the destroyers and frigates that will eventually make up its strike group, gives India options further afield, too.

“India can both influence and coordinate potential security solutions to regional concerns. Having an open ocean capability naval task group to contribute adds to India’s clout and options. It needn’t join in a multilateral response but can do so, or establish a separate independent presence, if it chooses,” said Carl Schuster, a former US Navy captain who now teaches at Hawaii Pacific University.

The new carrier will enable India to take a bigger role in military exercises by the Quadrilateral Security Dialogue, or “Quad,” an informal alliance of the United States, Japan, Australia and India.

For instance, the US and Japanese carriers have taken part in the annual Malabar exercises attended by Quad members.

The government signed off on its design and construction in 2003 and the keel was laid in February 2009. The ship was christened Vikrant — which means “courageous” or “victorious” in Sanskrit — and launched in August 2013.

But then delays set in: features needed to be redesigned, there was trouble securing aviation equipment from Russia, and then there was the Covid-19 pandemic.

Still, experts say India will be able to enhance its domestic shipbuilding capacity and learn from the experience.

“They now have the expertise to build the next carrier more quickly and probably with a better design,” Schuster said.

The Indian Navy is considering building a second indigenous carrier. This remains in the concept phase but there has been speculation that any new carrier could be in the 65,000-ton range, about the size of the UK’s HMS Queen Elizabeth or China’s second carrier, the Shandong.

China is seen as India’s main naval competitor in the region. With two carriers in service and a third far more advanced carrier launched in the past year, China is ahead of India both numerically and technologically, but analysts give India the edge in operational carrier experience.

The Indian Navy began operating aircraft carriers in 1961. Its first carrier, which it acquired from the UK, was also called Vikrant. The first Vikrant was retired in 1997. A second British-built carrier, INS Viraat, served in the Indian Navy for 30 years before its decommissioning in 2017.

China’s first aircraft carrier, the Liaoning, was an unfinished Soviet-era vessel that Beijing bought from Ukraine in 1998, updated and finally commissioned in 2012. Its first domestically built carrier, the Shandong, entered service in 2019 and in June 2022 it launched its third carrier, Fujian — an advanced carrier with electromagnetic catapult-assisted launch systems, similar to those used by the US.

“On paper, China’s new carriers have more capabilities in terms of payload and technology than Vikrant. However, India has decades of experience operating carrier aviation forces while China is still learning,” said Bradford, the Singapore analyst.

Even with that experience it could take a year or much longer for Vikrant to get fully up to speed as a fighting force. That’s typical for aircraft carriers. America’s newest carrier, the USS Gerald Ford, was commissioned in 2017 and is only expected to have its first deployment later this year.