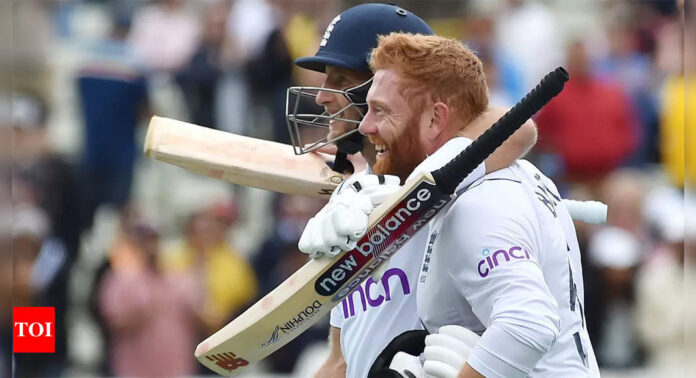 BIRMINGHAM (United Kingdom): Joe Root and Jonny Bairstow both hit hundreds as England continued their resurgence with a record fourth-innings chase to beat India by seven wickets in the Covid-delayed fifth Test at Edgbaston on Tuesday.
Set 378 to win, England finished on 378-3, with former captain Root 142 not out and Bairstow 114 not out — his second hundred of the match after he made 106 in the hosts’ first-innings 284.
As it happened | Scorecard
Victory saw England level this five-match series at 2-2.
No England side had previously made more to win in the fourth innings of a Test than 359, when now captain Ben Stokes’ brilliant century led them to a thrilling victory over Australia at Headingley three years ago.
But that record was overhauled with ease after England’s first series under a new leadership duo of Stokes and coach Brendon McCullum had seen them chase down seemingly stiff targets of 277, 299 and 296 during a 3-0 whitewash of Test world champions New Zealand.

(AP Photo)
England resumed on 259-3, needing just 119 more runs to win.
Root was 76 not out overnight and Bairstow unbeaten on 72 after the Yorkshire duo had come together at 109-3, with England having lost three wickets in quick succession either side of tea.
But their unbroken stand, built on largely orthodox if hard-hit strokeplay, was eventually worth 269, with England averaging nearly five an over as they reached their target inside 77 overs.
Bairstow was quickly into his stride Tuesday, cover-driving a four off Mohammed Shami before striking another resounding boundary down to long-on off Jasprit Bumrah, captaining India in place of the Covid-hit Rohit Sharma.

Both strokes were cheered on their way to the rope by a crowd who, as was the case on the last day of England’s wins over New Zealand at Headingley and Trent Bridge, had been let in for free.
And there were more roars of appreciation as Root, the world’s top-ranked Test batsman, cover-drove Shami for four in typically stylish fashion.
As England sped towards their target, it was hard to believe that they had won just one of their preceding 17 Tests prior to the New Zealand series.

What a masterful performance from England 👊Here’s how the #WTC23 standings look after the final #ENGvIND 👉… https://t.co/ILsGLurYeP

Root got to his hundred first when he late cut Mohammed Siraj for a 14th four in 136 balls for his third Test century of the season after two tons against New Zealand.
And while Bairstow was briefly becalmed, Root drove and then ‘ramped’ medium-pacer Shardul Thakur for a four and a six off successive deliveries.
Bairstow’s scampering single off Ravindra Jadeja saw him to a 138-ball century, including 12 fours and a six.

His fourth Test hundred in five innings also saw Bairstow become the first England player to hit two centuries in the same Test since Andrew Strauss against India at Chennai in 2008.
It was Bairstow’s sixth century in eight Tests in 2022.
India could have put England under greater pressure after starting the penultimate day three wickets down and scoring another 120 runs. But they lost their way as the last six wickets fell for just 55 as a succession of batsmen succumbed to the short ball.
Even so, there had previously been only two successful fourth-innings chases above 200 in a Test at Edgbaston, with South Africa making 283-5 in 2008 and England 211-3 against New Zealand in 1999.
But England’s newly aggressive ‘Bazball’ approach, named in honour of McCullum’s nickname, was evident from the start of their latest chase, with Alex Lees and Zak Crawley sharing a century opening stand in 19.5 overs — the fastest in England Test history.
This decider should have been played in Manchester last September only to be postponed just hours before the start because of coronavirus concerns within the India camp.