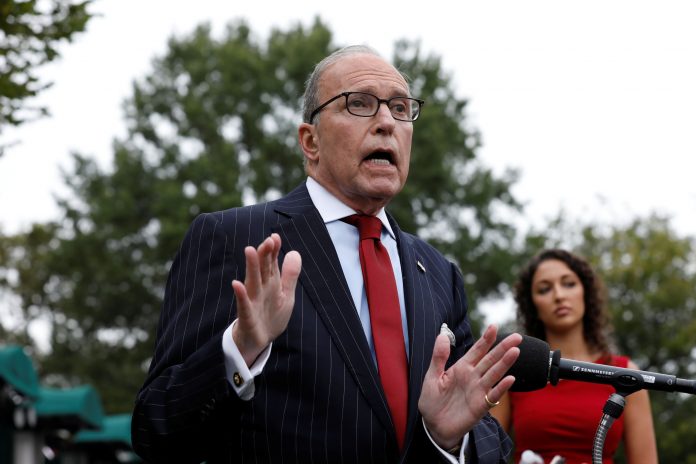 White House economic advisor Larry Kudlow speaks with reporters on the driveway outside the West Wing of the White House in Washington, U.S., September 24, 2020.

One of the first things you learn in Economics 101 is a phenomenon known as ‘the substitution effect.”

In short, consumers will quite easily switch from beef to chicken if the price of beef becomes prohibitively expensive. They’ll switch back to beef when falling demand brings the price of beef back down. We’re seeing that effect play out in spades in the economy, but it has less to do with price than with pandemic-related behavior.

Those suggesting that a strong economic rebound is underway in the U.S. are overlooking this very obvious phenomenon. White House chief economic advisor Larry Kudlow told CNBC Wednesday morning that given recent data, a “V-shaped recovery” remains his base case. I disagree.

Take for instance the surge in auto sales. Yes, it’s real but it’s also coming at the expense of air travel, train travel and mass transit.

The coronavirus pandemic is altering behavior in understandable ways as business travel has been greatly curtailed while travel and leisure, if they are being enjoyed at all, are being done as road trips, RV rentals or nature walks. Many have abandoned crowded gyms and purchased exercise equipment so they can work out at home.

That’s been a huge blow to workout facilities, just as Netflix has taken business from movie theaters that have been forced to shut their doors for the time being. Hence, as individuals protect themselves, their travel habits have become increasingly insular experiences, or limited to family and close friends.

The race to the suburbs is on. Individuals who have spent a lifetime in densely populated, and expensive, cities are heading out. A lot of it is health-related as city-dwellers are engaging in a near-mass exodus from cramped hot spots where the coronavirus has taken a large human toll.

Price has also been a factor in prompting people to search for more space at a significantly lower cost.

Just look at the sales and rental figures from cities like New York, San Francisco and Los Angeles. They are quite telling.

The shelter-in-place and work-from-home phenomena have hastened the trend, as well, giving employees more latitude (and longitude, for that matter) to cut their tether to any particular locale and carry on as they have before — with little effect on compensation or productivity, at least thus far.

We’ve also most definitely seen that same effect on restaurants since the lockdown began, and may see it again in a more pronounced manner come winter, when outdoor dining slows considerably and work-at-home is rejoined by cook-at-home again.

Grocery stores, meal delivery services and take-out will surge again and, again, at the expense of eating out. So, while it makes sense to invest in the beneficiaries of these substitutions, it does not make sense to suggest that a V-shaped recovery is underway by any stretch of the imagination.

Hence, It remains a rotational recovery, just as the stock market has shown investors rotating their investment dollars into companies that have not only survived the pandemic but also thrived in it.

Certainly, Q3 GDP is poised to rebound as a consequence of a warm-weather reopening of the U.S. economy, but I wouldn’t bet on that to continue much longer.

Investors need to understand that unless, or until, we see more relief and stimulus from fiscal policy and better therapeutics and vaccines, the economy will recover selectively while “Econ 101” still defines the nature, scope and duration of this economic “recovery.”

What we won’t see at this year’s inauguration