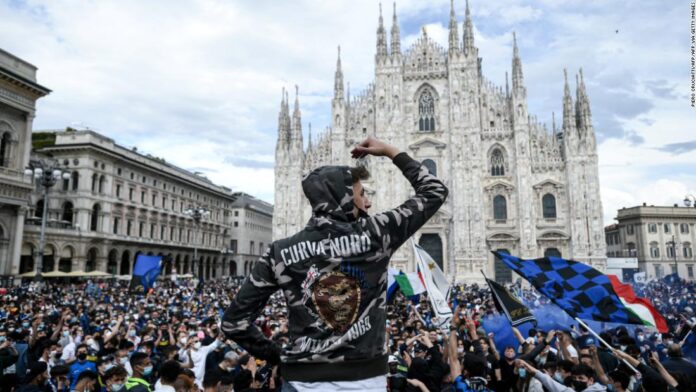 On Saturday, goals from Christian Eriksen and Achraf Hakimi secured a 2-0 win for Inter over Crotone, a victory that moved Antonio Conte’s 14 points clear of Atalanta on Saturday.

Atalanta’s 1-1 draw Sassuolo ensured Inter wrapped up the title with four games of the season to play, its Scudetto success breaking Juventus’ Serie A stranglehold.

“We are succeeding in toppling a kingdom that had lasted for nine years,” Inter coach Conte told reporters, referring to his team denying Juve a tenth successive Serie A title.

“We’re aware that we can do something extraordinary because Inter haven’t won a Scudetto in 11 years, and we’re breaking up a dynasty,” added Conte, who is a former Juve coach and led the Bianconeri to the first three of those nine consecutive league titles.

When Juve appointed Conte, the Turin club had finished seventh in Serie A as AC Milan pipped Inter to the title in 2011.

“They were both two extremely difficult situations because I joined Juventus after getting promoted with Siena and … there wasn’t a vision in place and we weren’t fancied but beat strong sides. From then, an important cycle began,” Conte told the Inter website as he reflected on his time at Juve.

“In coming here, I made the toughest decision because many others would have found things to hide behind. I tested myself, I love big challenges and I’ve always said I’m the number one fan of the clubs that I represent.

“It wasn’t easy to win over all the fans and I understand that, but I’m convinced that I’ve always given my all for the teams that I coach. I got involved to give my best and I’m satisfied because we’re doing something extraordinary.”

Inter appointed Conte, who won the Premier League title with Chelsea in 2017, in May 2019.

“It’s a new planet for me,” said Conte of his time at Inter. “It wasn’t easy, it’s not easy now and it won’t be easy in the future because there are a lot of dynamics in play, and people look to create negativity around Inter whenever the smallest opportunity arises. More positivity when we’re spoken about would be nice.”

Inter’s win at Crotone marked the 14th time this season that Conte’s team has kept a clean sheet.

READ: ‘When we come together it’s powerful,’ Henry says of social media blackout

“We’ve become more compact, we look to help one another as teammates, we’ve worked to become a winning group and results have improved.” Inter defender Stefan de Vrij told the club’s website.

“The Coach transmits passion and a winning mentality to us. The group is united, and the way everyone has improved made us understand that we were moving in the right direction. For us defenders, it’s a pleasure to work together and we’ve known each for years and now know how to move together.”

Inter and Juve were two of the 12 clubs that last month announced their intention to breakaway from the current UEFA competition format and create their very own European Super League, before the project quickly unraveled.
READ: A pair of Messi’s football boots auctioned for $173,000

In an underwhelming season for Juve, the Turin club’s hopes of qualifying for the Champions League could be scuppered by Inter when the two teams meet on May 15.