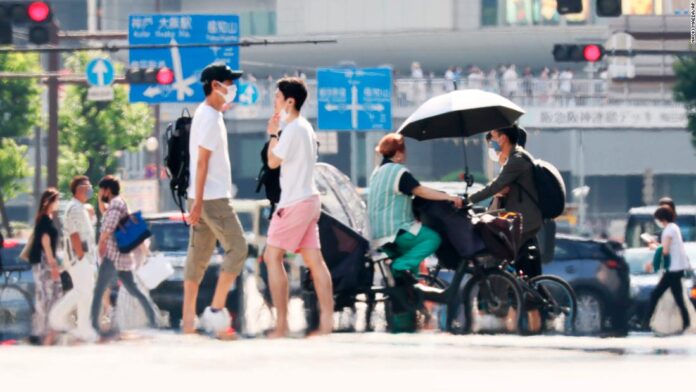 The government urged citizens in the capital to turn off lights and power switches for three hours in the afternoon and to use air conditioning “appropriately,” as the country struggles with growing power shortages.

The request comes despite experts warning that record-setting temperatures could continue for weeks.

“Please save as much power as possible, such as by turning off lights that are not in use,” the Ministry of Economy, Trade and Industry said Monday. It said appropriate uses of air conditioning included to “prevent heatstroke.”

Japan’s power supply has been tight since March, when an earthquake in the northeast forced some nuclear power plants to suspend operations. At the same time demand is at its highest since 2011, when Japan was hit by the strongest earthquake in its recorded history. The ministry warned the mismatch between supply and demand is becoming “severe.”
But with recent temperatures soaring to dangerous levels, rationing electricity will not be easy.

On Tuesday, Tokyo experienced scorching heat for a fourth successive day after setting records for the month of June at the weekend.

The sweltering temperatures are forecast to last for the rest of the week and possibly worsen — meaning demand for power was likely to increase as residents stay home and turn on the air conditioning.

Japan’s heat wave is just one of many happening around the world as scientists warn extreme weather is becoming more frequent due to the worsening climate crisis.
Soaring temperatures in India and Pakistan in recent weeks forced schools to close, damaged crops, put pressure on energy supplies and kept residents indoors — with some experts questioning whether such heat was fit for human survival.
And a massive heat dome has engulfed parts of the United States, bringing temperatures above 100 degrees Fahrenheit (about 37 Celsius) to major metro areas including Minneapolis, Chicago, Nashville, Memphis, Dallas, New Orleans and Atlanta.

In addition to the heat, floods have inundated Yellowstone National Park, wildfires have blazed in Arizona and New Mexico, and severe storms have caused widespread power outages in the upper Midwest and Ohio River Valley.

“More frequent and intense heat waves in cities are to be expected with further global warming,” said climate scientist Winston Chow from the College of Integrative Studies at Singapore Management University.

“I fear that for such places, this is [now] the new climate normal … if nothing is done to adapt and mitigate the causes of climate change.”

Especially worrying, Chow said, was the impact of extreme heat on the elderly, who account for 28% of Japan’s population.

“The elderly are biologically, physiologically predisposed to being more vulnerable to heat related injuries, and more than a quarter of Japan is above the age of 65. The risk of heat stress and stroke without any attempts to adapt would be very high in Tokyo,” Chow said.