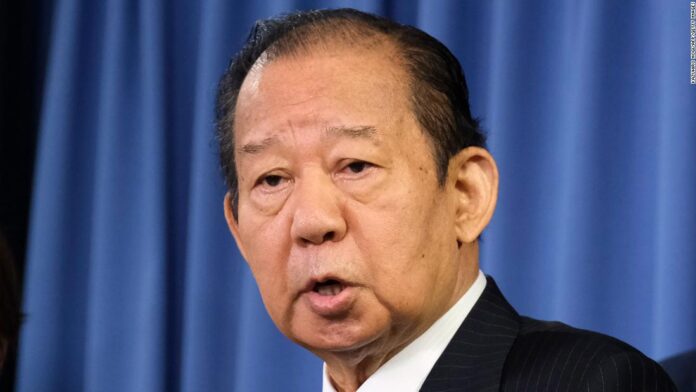 Toshihiro Nikai, secretary general of the country’s leading Liberal Democratic Party (LDP), on Tuesday proposed that women lawmakers should be able to observe the party’s key meetings — but not speak in them.

The 82-year-old’s plan to allow five female lawmakers to observe the party’s main gatherings was a response to criticism that the LDP’s board is dominated by men, according to Reuters. On February 15, Tomomi Inada, who was Japan’s second female defense minister, had written to Nikai with suggestions on how to promote women within the party and ensure they were more involved in policy making.

Two of the party’s 12-member board are women, while only three of its 25-member general council are female.

Nikai said it was important for the women to “fully understand what kind of political discussions are happening” at the directors’ meeting and the general council. “It’s about letting them take a look,” he added, at a news conference on Tuesday.

Online, his proposals became a trending topic attracting thousands of posts, with Twitter users lambasting the remarks as tone deaf and sexist.

“How hopeless … but I bet (Nikai) still thinks he’s doing something good here. Thinking, but look, we’re letting them (the female lawmakers) attend. But nope, it can’t go as far as letting them have a say,” tweeted Hiroki Mizoguchi, a prominent author on immigration issues in Japan. “It’s like he’s saying it’s better having women at the meeting than not there at all … It’s really horrific,” he added.

“According to their views, men will take care of women as long as women don’t threaten them and stay on their lane. Women are treated as second-class citizens forever here in Japan,” Kawakami added.

CNN has reached out to the office of the LDP General Council, which said that “nothing has been officially decided” about women joining key meetings as observers.

A bad week for women

Last Friday, Yoshiro Mori, age 83, resigned from his post as Tokyo 2020 Olympics chairman after sexist remarks he made about women were leaked to Japanese media.

Mori said at an Olympic board of trustees meeting that “meetings with lots of women take longer” because “women are competitive — if one member raises their hand to speak, others might think they need to talk too,” according to reports in the Japanese media.

“If you want to increase female membership, you would be in trouble unless you put time limits in place,” he is reported to have added.

Mori, a former prime minister, later resigned and offered his “deepest apologies” for his comments adding, “my inappropriate statement has caused a lot of chaos.”

Globally, politics remains one of the most male-dominated spheres in society. Only 25% of all national parliamentarians were women as of October 2020, according to the Inter-Parliamentary Union, a global organization of national parliaments.
But in Japan, that figure is even lower. Only 46 of 465 lower house lawmakers are women — that’s fewer than 10%, compared to a 20% average in Asia, as of October.

Over the past decade, demographic challenges and the growing number of women in higher education have slowly started to change Japan’s male-dominated management structures.

But while women account for 51% of the Japanese population, according to 2018 World Bank data, the country is ranked 121 out of 153 countries in the World Economic Forum’s latest global gender gap index.

Reuters and CNN’s Selina Wang and Junko Ogura contributed to this report from Tokyo.