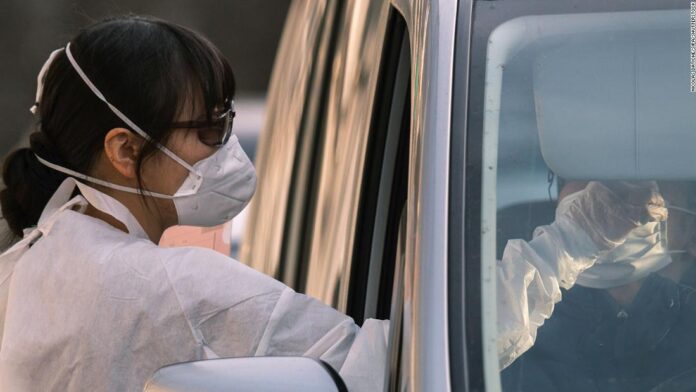 The emergency declaration will be in place from Friday until February 2 and applies to Tokyo and the three neighboring prefectures of Chiba, Saitama and Kanagawa. The emergency includes a number of restrictions on daily life.

Suga has ordered companies to encourage their staff to work from home and reduce office populations by 70%.

Residents of the affected areas are also urged to avoid non-essential outings. The hospitality sector has been hit, with restaurants ordered to close by 8 p.m. and sporting events have been instructed to limit the amount of spectators present.

Suga said Thursday that the government will provide up to 1.8 million yen ($17,400) per month to each restaurant that complies with a request to shorten its operating hours.

Despite the raft of new measures, schools will remain open.

“There have been few cases of school infections spreading from schools to the community, and we would like to protect the learning opportunities of children who will lead the future,” Suga said Thursday at a press conference.

Japan’s leader stressed that the country still intends to hold the Tokyo Olympic and Paralympic games in July, despite the emergency.

“I am determined to hold safe and secure games by taking all possible measures against the infection,” Suga said.

Suga has been criticized for what has been perceived as his reluctance to take action to combat the spread of the virus, after the governor of Tokyo and the three neighboring prefectures urged him to issue an emergency declaration during a televised press conference last week.

The state of emergency comes as new Covid-19 cases and hospitalizations in Tokyo and the rest of the country, surge to their highest levels.

On Wednesday, Japan recorded 5,953 new Covid-19 infections — its highest daily caseload and the first time infections have surpassed the 5,000 mark — and 72 deaths. The national total has risen to 259,105, with at least 3,804 fatalities.

The greater Tokyo region has been among the worst hit, surpassing 2,000 daily cases on Thursday for the first time with a record 2,447 new infections, according to updated figures from the Tokyo metropolitan government.

The number of seriously ill Covid-19 patients in need of hospitalization also continued to rise. In the capital, there were 121 patients in serious condition on Thursday with more than 3,000 receiving medical care in hospital.

Country-wide, the number of people in a serious condition rose by 13 on Wednesday to 784, with 41,054 people in hospital.

In a meeting with Japan’s health ministry on Wednesday, infectious disease experts called for immediate and strict measures to fight the outbreak.

“Looking at the number of newly infected people in the last week, Tokyo alone accounts for a quarter of the national total. The total number in the metropolitan area, including three other prefectures, accounts half of the total number of whole country. It is difficult to control the outbreak in rural areas unless we can curb the spread of virus in the metropolitan area immediately,” said Takaji Wakita, chief of the National Institute of Infectious Diseases after the meeting.

Others said the state of emergency would be insufficient to curb the infection rate by the end of the month.

“I predict it is not enough period to curb the infection surge, we need to reduce more the human contact,” said Satoshi Kamayachi, physician and one of the board members of the expert advisory board, speaking to CNN affiliate TV Asahi.

Hiroshi Nishiura, a professor at Kyoto University specializing in mathematical modeling for infectious diseases, told the meeting an emergency declaration would need to last take two months for the daily number of new infections to fall to manageable levels.

Japan confirmed its first cases of the new, potentially more infectious UK coronavirus variant two weeks ago, prompting the government to ban all foreign travelers from entering the country.

But cases throughout the country have been on the rise since the start of November thanks in part to cold winter weather and social distancing fatigue.

Suga dismissed calls to declare a state of emergency in November, citing advice from an advisory panel that hospitals were still relatively empty. However, Japan’s total case count has more than doubled since then.

Japanese officials are believed to be wary of introducing a lockdown or other emergency measures for fear of harming the economy. The country is also once again facing difficult decisions around the OIympics, which were due to take place last summer but were eventually postponed as the pandemic spread around the world.

The Tokyo Games are scheduled to be held this summer from July 23 to August 8, according to the International Olympic Committee, with pared-back opening and closing ceremonies in keeping with an “overall simplification of the Games.”

On Thursday, the Tokyo metropolitan government said it would be postponing the upcoming exhibitions of the Tokyo Olympics torch “to reduce the flow of people and to prevent the spread of Covid-19.” The torch had been on display in several municipalities from November and was due to restart this week.

Japan was one of the first countries hit by the pandemic, but the government was able to keep cases at bay by enacting stringent border controls, investing efforts in contact tracing and pushing its citizens to practice social distancing. The efforts had been largely successful, with Japan able to avoid the type of strict lockdowns enacted in other parts of the world.

Japanese health officials have continuously urged citizens to reduce their daily activities, remain vigilant and only dine out in small numbers, but that no longer appears to be enough to stop the pandemic from spreading.

“Japan’s response is too slow and confusing, which reflects the lack of leadership and strategy. On one hand they encouraged domestic travel and eating out, on the other they just asked people to take caution,” said Kenji Shibuya, director of the Institute for Population Health at King’s College London. “The government is basically asking people voluntarily to behave properly, but does not do more than that.”

Vitamin D: How To Make Mushroom Khichda To Include The Sunshine...