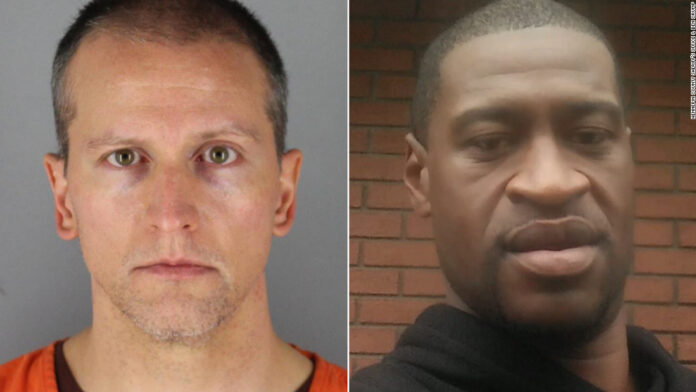 Chauvin has pleaded not guilty to second-degree unintentional murder and second-degree manslaughter charges. In addition, a charge of third-degree murder that was dismissed in October is now in limbo after an appeals court ruled the trial judge should reconsider a motion to reinstate it, which could lead to a delay in the start of the trial.

Jury selection in the trial began Tuesday at the Hennepin County Government Center and is expected to last about three weeks. Opening statements are expected to start no earlier than March 29, followed by testimony over the next two to four weeks.

Nine potential jurors were interviewed over the course of about seven hours by Judge Peter Cahill, a prosecutor, and defense attorney. As of Tuesday afternoon, two men and one woman had been selected to serve as jurors during the trial.

Court was scheduled to resume with a motions hearing at 9 a.m. ET Wednesday. Jury selection continues at 10 a.m. ET.

In a case with so much media attention, it may be impossible to find a jury that hasn’t heard about Floyd’s death. But the goal is not to find ignorant people; it’s to find jurors who can be impartial and are open to hearing the evidence and the law.

“No matter what a potential juror has seen or heard, can they set that aside and base their decision on evidence in court and the law the judge gives them?” said Mary Moriarty, the former chief Hennepin County public defender.

In December, prospective jurors were sent a 16-page questionnaire asking for their thoughts on Black Lives Matter protests, their views on policing and their personal interactions with police.

Starting Tuesday, prospective jurors who completed the questionnaire were questioned one by one in court in a process known as voir dire. The juror’s name, address and other information is kept anonymous.

The judge first asks questions of the prospective juror, followed by the defense and then the prosecution. If the defense or prosecution believes the person cannot be impartial in the case, they can ask the court to dismiss the person for cause. Each side has unlimited challenges for cause.

Prosecutors and defense attorneys can also move to dismiss prospective jurors without cause using what’s called a peremptory challenge. Chauvin’s team has 15 of these challenges and the prosecution has nine, according to the court. These peremptory challenges can themselves be challenged, though, if they are based on race, ethnicity or sex — known as a Batson challenge.

As of Tuesday afternoon, the jurors selected included two White men — one in his 20s or 30s and the other in his 30s — along with a woman of color in her 20s or 30s.

The prosecution used a peremptory strike on a White man in his 50s or 60s who said people should not second-guess police officers’ decisions.

Finally, three prospective jurors were excused by the judge: one woman for saying she could not be impartial, a man who was worried the trial would affect his work as an accountant and a 19-year-old man because he said he’d treat police officer witnesses differently than others.

Who’s who in the trial

George Floyd, 46, was born in North Carolina and raised in Houston and moved to Minnesota as an adult for a fresh start, working as security at a restaurant.
On May 25, 2020, police were called about a man who had used a $20 counterfeit bill at a Minneapolis store. Officers were directed to a parked car with Floyd in the driver’s seat, and they handcuffed him and moved to put him into the back of a police car, according to the amended complaint.

Two other officers, including Chauvin, then responded to the scene and struggled to get Floyd into the vehicle, the complaint states. Chauvin allegedly pulled Floyd to the ground in a prone position and placed his knee on Floyd’s neck and head. His knee remained there even as Floyd pleaded, “I can’t breathe,” said “I’m about to die” and ultimately stopped breathing, the complaint says. He was pronounced dead at a hospital shortly after.

The Hennepin County Medical Examiner’s autopsy listed the cause of death as heart failure “complicating law enforcement subdual, restraint, and neck compression,” and ruled it a homicide. The medical examiner also noted arteriosclerotic and hypertensive heart disease; fentanyl intoxication; and recent methamphetamine use as “other significant conditions.”
Medical examiners hired by Floyd’s family also ruled it a homicide but said Floyd died of “asphyxiation from sustained pressure” during the arrest.
Derek Chauvin, 44, had been an officer with the Minneapolis Police Department since 2001 until he was fired in the wake of Floyd’s death. He was the subject of at least 18 prior complaints, two of which were “closed with discipline,” according to a department internal affairs public summary.
A motion to dismiss the charges filed last August previewed his possible defense. In that filing, his attorney argued that Chauvin had no intent to harm Floyd while restraining him, that he was acting within police policy, and that Floyd’s cause of death was the result of a drug overdose and other existing health issues.

Due to limits on courtroom space because of the pandemic, their joint trial was moved to this summer. They will not testify in Chauvin’s trial, but their names, statements and actions will be heavily featured.

Eric Nelson is Chauvin’s defense attorney and will represent him at trial. He is part of the Halberg Criminal Defense practice and has worked exclusively in criminal defense since being admitted to the bar, according to his online bio.

Peter Cahill is the Hennepin County judge overseeing the case. He was first appointed to the bench in 2007 and has been reelected to the position three times since, most recently last November.

An explanation of the charges

The second-degree unintentional murder charge alleges that Chauvin killed Floyd “without intent” while he committed or attempted to commit felony third-degree assault, which is defined as inflicting “substantial” bodily harm. The charge is punishable by up to 40 years in prison.

The second-degree manslaughter charge alleges that Chauvin caused Floyd’s death by “his culpable negligence, creating an unreasonable risk and consciously took the chances of causing death or great bodily harm.” “Culpable negligence” is essentially a heightened form of ordinary negligence, Moriarty explained. The charge is punishable by up to 10 years in prison.

An earlier charge of third-degree murder was dismissed in October as the judge ruled it did not apply to this case. The Minnesota Court of Appeals ruled Friday that the judge should reconsider the state’s motion to reinstate the third-degree murder charge. Chauvin’s defense has appealed that ruling.

How the pandemic changed the trial

The possibility of a courtroom Covid-19 outbreak looms, so the court has taken a number of steps to prevent one.

Everyone who attends the Chauvin trial will be required to distance from others and wear a mask, although witnesses and attorneys may remove their masks during testimony and other court statements. Plexiglass has been installed around the courtroom as well.

In addition, the trial will be livestreamed for those not able to attend, a first for a Minnesota criminal trial.

Only one member of Floyd’s family and Chauvin’s family will be allowed to attend the trial because of the Covid-19 restrictions. For each family, a different family member can rotate through that in-court position with appropriate credentials, the judge ruled.

How police are preparing

Given the unrest and looting that ensued when Floyd died, local and state authorities are taking major security measures. The Hennepin County Government Center is now surrounded by fencing and barricades, and the building will be empty aside from those participating in Chauvin’s trial and approved staff.

Mayor Jacob Frey said the city is preparing for potential unrest with “painstaking detail.” He said up to 2,000 National Guard members will be prepared to respond along with up to 1,100 law enforcement pooled from 12 other jurisdictions.

“Safety is a top priority through this very difficult time in our city,” Frey said last month. “There’s great frustration, there’s anxiety, and there’s trauma. We anticipate that trauma increasing as we get closer to jury deliberations.”

Minnesota law enforcement leaders last month outlined their plan to work together to provide security during the trial in what they called “Operation Safety Net.”

“Planning for this operation occurred starting back in July,” Langer said. “It occurred in earnest all summer.”

Operation Safety Net is organized into four phases, according to Langer: (1) Planning and preparation, (2) jury selection; (3) closing arguments, deliberations and a verdict; and (4) demobilization.

“It will allow all of us to be able to respond metro and region wide, if needed, and it will allow great cooperation coordination and communication,” he said.

“As of right now, we do not have any current, actionable intelligence about groups planning to come here to disrupt the trial or to cause disorder,” Harrington said. “We are exercising this unified command out of caution.”