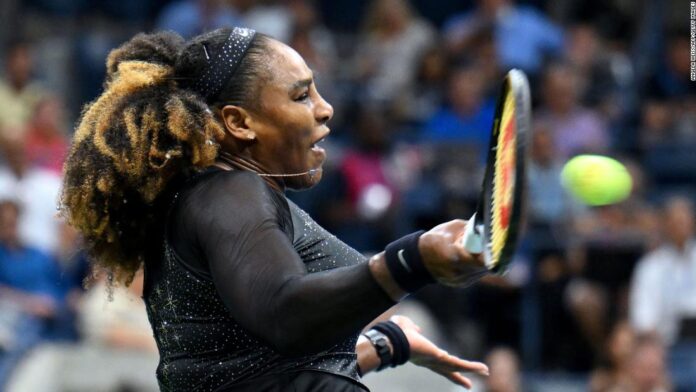 A 40-year-old underdog in the final days of her storied career, Williams had just upset the world’s second-ranked player, a US Open outcome that seemed doubtful until it became inevitable.

So … Serena, were you surprised?

Williams chuckled as cheers washed over the court.

Williams, playing what could be the last tournament of her career, won Wednesday evening, downing Anett Kontaveit 7-6 (4) 2-6 6-2 in New York.

Williams looked better than in previous matches this year, where she was still trying to shake the rust of a long layoff.

In Kontaveit, however, Williams faced a much sterner test and was undoubtedly the underdog on paper.

“After I lost the second set, I thought, ‘Oh, my goodness, I got to give my best effort because this could be it,'” Williams told ESPN in an on-court, post-match interview.

A boisterous but behaved crowd cheered her every point.

She referred to the long layoff in her interview Wednesday but said, “I love a challenge.”

Williams will next face Australia’s Ajla Tomljanovic in the third round. Tomljanovic, who was playing at the same time as Williams on Wednesday, defeated Russian Evgeniya Rodina 1-6, 6-2, 7-5.

And Williams is not playing just singles; she will open doubles play with her sister Venus Williams on Thursday night.

“I need more matches,” she told ESPN. “I love rising to the challenge. Yeah, I haven’t played many matches, but I’ve been practicing really well. In my last few matches, it just wasn’t coming together. I’m like, ‘This isn’t me.'”

Things have changed since she started playing at the Open, she said.

She began singles play Monday with a 6-3 6-3 victory over Danka Kovinić of Montenegro. It was Williams’ third match since announcing in Vogue magazine she will “evolve away from tennis” after the US Open.

“I have never liked the word retirement. It doesn’t feel like a modern word to me. I’ve been thinking of this as a transition, but I want to be sensitive about how I use that word, which means something very specific and important to a community of people,” Williams said in the Vogue article published earlier this month.

“Maybe the best word to describe what I’m up to is evolution. I’m here to tell you that I’m evolving away from tennis, toward other things that are important to me,” she said.

At her post-match news conference Monday, Williams was asked if this is definitely her last tournament.

“Yeah, I’ve been pretty vague about it, right?” she said with a smile. “I’m going to stay vague because you never know.”

The opening-round win over Kovinić was the best Williams had looked since making her comeback from injury. She has managed to win just one match since returning to the circuit in June and was unable to get close to the form that helped her win her last grand slam title in 2017.

But Kontaveit, who had said she was excited to play against Williams, encountered a player who showed no signs of wanting to hasten her retirement.

“I think she played really well,” said the Estonian during the post-match news conference. “I mean, I thought I didn’t play a bad match at all.”

After the players split the first two sets, Williams stepped up her play for the decider, Kontaveit said.

“She really switched it on from there,” she said. “There’s a few points here and there where I feel like I could have done better on my serve maybe. I mean, she was returning better. She was playing the rallies better. I felt like she did everything a little bit better in the third set.”

The passionate pro-Williams crowd was also a challenge, Kontveit added.

“I mean, I think they were not rooting like against me. They just wanted Serena to win so bad,” she said. “So, I mean, I don’t think it’s a personal attack against me or anything. I mean, it’s fair. I mean, she deserves this, yeah.”

One of the greatest tennis players ever, Williams has won 23 grand slam singles titles and has won the US Open six times, most recently in 2014. Now 40 years old, Williams’ career will come full circle as her final match — in whichever round that turns out to be — is to be played at the site of the first of her grand slam singles wins, the 1999 US Open.

Then just a teenager, Williams burst onto the scene to stun world No. 1 Martina Hingis in the final and lay the first stepping stone on her path to two decades of dominance.

After Kontaveit won her first Tour-level title in 2017 her true breakout year came in 2021 as she won four WTA tournaments to rise through the rankings.

An aggressive player with a varied game and powerful forehand, Kontaveit broke into the world’s top 10 for the first time in November 2021 and has been a mainstay since.

She sits at a career-high ranking of No. 2 — the highest ranking in history for an Estonian — and at age 26 was looking to improve on her best showing at a grand slam, a quarterfinal appearance at the 2020 Australian Open.

Kontaveit looked impressive in her opening-round US Open win over Jaqueline Cristian of Romania, dropping just three games, and said after her win that she was “rooting” for Williams in her first-round match.