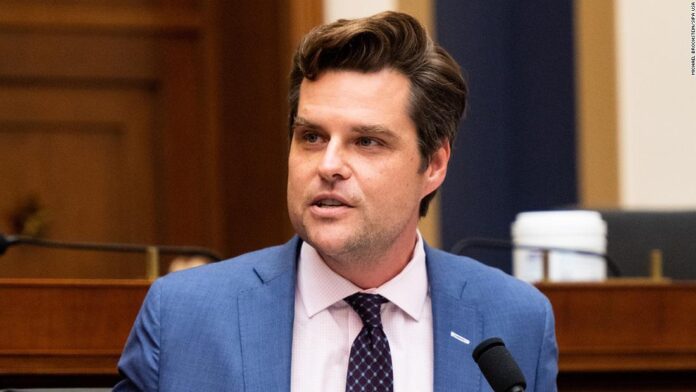 A person briefed on the probe confirmed to CNN that federal authorities were investigating Gaetz as part of a broader probe into trafficking allegations against another Florida politician, an investigation that began in the closing months of the Trump-era Justice Department under Attorney General William Barr.

The Times reported that investigators were examining whether Gaetz violated federal sex trafficking laws, including whether Gaetz had a sexual relationship with the 17-year-old girl and whether he paid for her to travel with him. Gaetz has not been charged with any crimes.

Gaetz was shopping for a lawyer a few weeks ago, approaching at least one major criminal defense firm in Washington, DC, to represent him, according to a person familiar with the matter.

Soon after the Times story published, Gaetz said the allegations were completely false. He also claimed that they stemmed from an extortion plot against him and his family, saying in a statement to CNN that “no part of the allegations against me are true” and that the claims were being pushed by people who are targets of an “ongoing extortion investigation.”

“Over the past several weeks my family and I have been victims of an organized criminal extortion involving a former DOJ official seeking $25 million while threatening to smear my name. We have been cooperating with federal authorities in this matter and my father has even been wearing a wire at the FBI’s direction to catch these criminals,” Gaetz claimed.

“The planted leak to the New York Times tonight was intended to thwart that investigation. No part of the allegations against me are true, and the people pushing these lies are targets of the ongoing extortion investigation. I demand the DOJ immediately release the tapes, made at their direction, which implicate their former colleague in crimes against me based on false allegations,” Gaetz added.

Pensacola, Florida-based federal prosecutors are examining the extortion allegations, according to one source, which is being handled separately from the investigation of Gaetz. The source did not disclose who was being investigated for the extortion.

Gaetz, who was elected to Congress in 2016, is one of former President Donald Trump‘s staunchest defenders in Congress. He is a frequent guest on Fox News and conservative cable outlets, and Axios reported hours before the news broke about the DOJ investigation that he was considering leaving Congress for a job at Fox News’ conservative rival Newsmax.

Federal authorities are investigating Gaetz as part of a broader probe into Joel Greenberg, the person briefed on the probe told CNN, a former county official in Central Florida who was arrested last year on charges that include sex trafficking of a minor. Greenberg has pleaded not guilty and is set to go on trial.

Public integrity prosecutors in Washington, DC, and Tampa are overseeing the Gaetz investigation, the person added.

The Department of Justice declined to comment. In a statement to CNN, the FBI in Jacksonville said, “The FBI declines to confirm nor deny the existence or status of an investigation.”

In an interview on Fox News Tuesday evening, Gaetz strongly denied the accusations.

“The person doesn’t exist. I have not had a relationship with a 17-year-old. That is totally false. The allegation is, as I read in the New York Times is, I have traveled with some 17-year-old in some relationship. That is false and records will bear that out to be false,” Gaetz said.

Gaetz also accused a former Department of Justice prosecutor, David McGee, of attempting to extort him and his family over the allegations.

McGee did not immediately respond to a request for comment by CNN, but in an interview with The Washington Post, he denied that he is involved in attempts to extort Gaetz or is connected to the DOJ investigation.

“It is completely false. It’s a blatant attempt to distract from the fact that he’s under investigation for sex trafficking of minors,” McGee told the Post. “I have no connection with that case at all, other than, one of a thousand people who have heard the rumors.”

McGee had a major professional success in October, when he and his law firm won a massive judgment from a US federal court, ordering Iran to pay more than $1.45 billion to the family of kidnapped former FBI agent Robert Levinson, Iran has denied any knowledge of Levinson’s kidnapping. McGee, as the family’s primary attorney, is still seeking to force Iran to pay.

“If there is a tape, play the tape,” McGee told the newspaper. “There is nothing on that tape that is untoward. It is a pleasant conversation of a dad concerned about his son and the trouble his son was in.”

Democrat calls for Gaetz to be removed from committee

The allegations against Gaetz prompted one House Democrat, Rep. Ted Lieu of California, to call on Gaetz to be removed from the House Judiciary Committee pending the outcome of the reported investigation.

But Rep. Jim Jordan of Ohio, the top Republican on the panel, said in a statement to CNN Wednesday that Gaetz should remain on the committee.

“I believe Matt Gaetz. He should not be removed from the Judiciary Committee,” Jordan said.

McCarthy said Wednesday on Fox News there were “serious implications,” and he would remove him from the House Judiciary Committee if they were true. He said that he had not yet spoken to Gaetz but planned to later Wednesday.

“Those are serious implications. If it comes out to be true, yes we would remove him if that was the case. But right now Matt Gaetz has said that it’s not true and we don’t have any information. So let’s get all the information,” McCarthy said.

The Times reported Tuesday that it was not clear how Gaetz met the 17-year-old girl, but that federal investigators were examining encounters that allegedly took place about two years ago, according to two of their sources.

Gaetz told the newspaper in an interview that his lawyers had been in contact with the Justice Department. He said they were told he was the subject, not the target, of an investigation.

“I only know that it has to do with women,” Gaetz told the Times. “I have a suspicion that someone is trying to recategorize my generosity to ex-girlfriends as something more untoward.”

The investigation into Greenberg, a former Seminole County, Florida, tax collector, resulted in an indictment last June on allegations of elaborate schemes against a political opponent and making fake IDs. He now faces 12 counts, including one charge for sex trafficking a child between 14 and 17 years old, though allegations details there available in court records are scant.

The bulk of his current charges revolve around accusations Greenberg stalked and harassed a political opponent who worked at a school, by trying to falsely frame the person as a white supremacist and child abuser, on a fake Twitter account he allegedly set up using the person’s name and photograph and in nine letters he mailed to the school where he posed as an anonymous student.

He is also accused of making fake driver’s licenses. He has pleaded not guilty and is in jail pending his trial, after he broke his bail terms earlier in March.

This story and headline have been updated with additional reporting Wednesday.