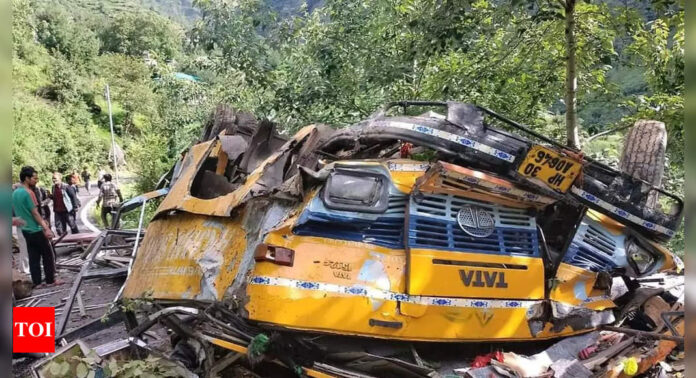 MANALI: Over 10 people, including students and daily commuters, were feared dead as a private bus plying on Shainsher-Sainj route rolled down the hill side near Jangla Mor on Monday morning at about 8.30am.
Several bodies have been recovered from the spot so far while some people with injuries have also been rescued from the accident site. As the bus was completely damaged and had landed upside down, many bodies are feared trapped inside the wreckage. Authorities say the death toll may go up.

The death toll is likely to go up.
According to sources, the bus was carrying more than 30 passengers, mostly daily commuters and students, who were going towards Sainj. The bus driver lost control of the vehicle near a hairpin bend and it rolled down the steep hillside.
The passengers were crushed to death as bus rolled over multiple times before hitting the road below. The body of the bus has been destroyed completely.
Kullu senior superintendent of police, Gurdev Sharma, said police teams, ambulances and officials from administration have rushed to the spot to carry out relief operations.
Police said exact number of passengers inside the bus and number of casualties cannot be ascertained so far as relief works are still under way.
Sources said some passengers had a miraculous escape and some were rescued from the spot by the local residents who rushed for help.
PM Modi, Himachal CM express grief over lost of lives
Prime Minister Narendra Modi expressed his grief over the lost of lives in Kullu accident.

The bus accident in Kullu, Himachal Pradesh is heart-rending. In this tragic hour my thoughts are with the bereaved… https://t.co/nfPAhPjxbk

PM Modi also announced an ex-gratia of Rs 2 lakh each for the kin of the deceased and Rs 50,000 for injured.

The Prime Minister has approved an ex-gratia of Rs. 2 lakh each from PMNRF for the next of kin of those who have lo… https://t.co/rWmzuWLfes

“I received news about the private bus accident in Sainj valley of Kullu. The entire administration is present at the spot and the injured are being taken to the hospital. I pray to God to give peace to the departed souls and strength to bereaved families,” tweeted CM Jairam Thakur.