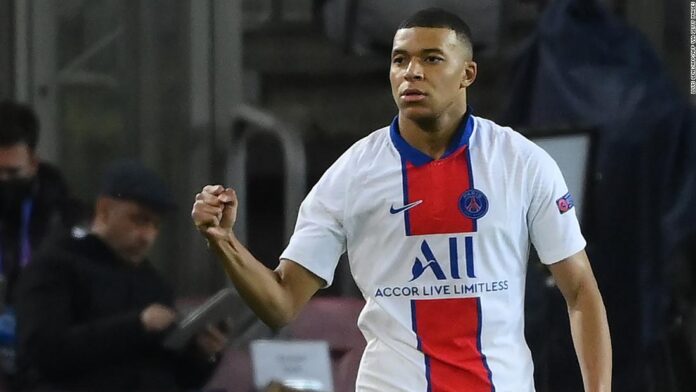 The ruthless Frenchman was a constant threat throughout as he once again showed his ability to perform on the biggest stage.

His first goal, a riffled shot into the roof of the net, had canceled out Lionel Messi’s earlier penalty and the youngster added a second after half-time as Barcelona cleared an attempted cross into his path.

Moise Kean headed in a third for the Parisians before Mbappe completed his hat trick by finishing off a quick counterattack in the closing stages.

The result gives PSG a huge advantage ahead of the return leg at the Parc des Princes on March 10, as Barcelona faces a mammoth task to progress to the quarterfinals.

Many had hoped the game between two European titans would be good value and they weren’t disappointed.

Barcelona had seemingly turned a corner in recent weeks after what’s been a difficult season. The Catalans had been on a run of seven consecutive La Liga victories but it was simply torn apart by PSG.

The hosts had taken the lead in a familiar fashion after Frenkie de Jong was accidentally tripped inside the penalty box. Messi expertly dispatched the resulting spot-kick to score in the Champions League for the 17th consecutive calendar year.

But it was all PSG from that moment on and, in the absence of Neymar, it was Mbappe who took center stage, outperforming Messi on his own turf.

The 22-year-old became only the third player in history to score a Champions League hat trick against Barcelona in what was his first match at the Nou Camp.

“We wanted to come here and win and we did that in style,” said the striker after the match. “Tonight was magnificent, but we haven’t won anything yet.”

His performance also sparked a reaction online with several of his fellow professionals heaping praise on Mbappe.

The result will leave Barcelona asking big questions about the quality of its squad. Aside from a few moments of magic in the first half, Messi went missing for much of the encounter, and its defense, which welcomed back Gerard Pique after a three-month injury layoff, looked vulnerable.

The La Liga giant can take some comfort in history, though.

Barcelona had trailed PSG 4-0 in the 2017 edition of the tournament before turning the result around in the second leg with a 6-1 victory.

However, speaking after the match, Barca manager Ronald Koeman wasn’t holding out much hope.

“The result reflects how superior PSG were, they were much more effective than us,” he told reporters.

“I could tell you lies but the fact is that at 4-1 down from the home leg, there are very few chances of going through.”

Elsewhere in the Champions League, Liverpool took complete control of its last 16 tie with RB Leipzig.

The English Premier League side was worthy of its 2-0 away victory thanks to goals from Mohamed Salah and Sadio Mane.

The result will come as a huge relief after a tough few weeks domestically for both the team and its manager.

“It was the game we wanted and the game we needed tonight,” Liverpool boss Jurgen Klopp told BT Sport after the match.

“Leipzig can be a real monster, the way they played in the Bundesliga, they overrun teams, they are really physical, they are pretty much good in everything and tonight we controlled them in an exceptional way.”

Liverpool will host its German opponents in the second leg on March 10.